Cindy Crawford is Subject to Gravity! Imagine That! 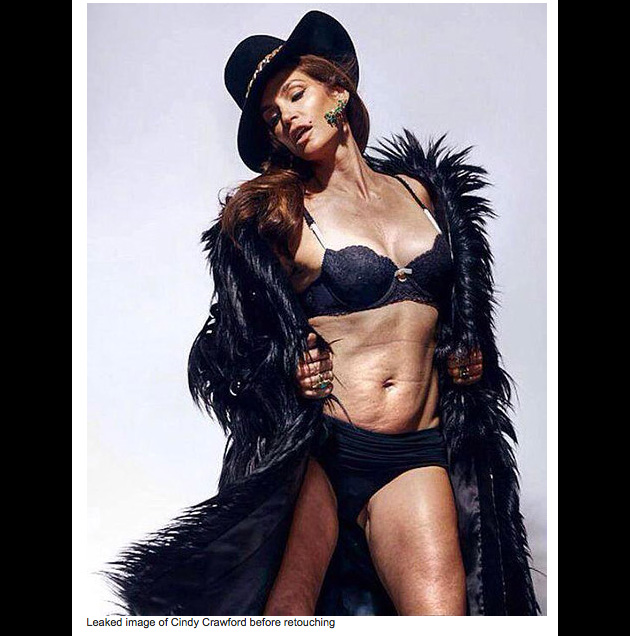 An un-retouched photo of model Cindy Crawford is getting more attention than Ukraine, Boko Haram and Greece’s game of chicken all put together.

About the only topic outpacing Crawford’s aging abdomen is 50 Shades of Gray but that’s another story.

Among the reactions to the real-life photo are congratulations offered to Crawford for being brave enough to show herself au naturel.

The only problem: she didn’t. The photo was never meant to be seen. It was part of a magazine location shoot in 2013 and the shots published in the magazine were a head shot and others with her abdomen covered.

So no kudos to Crawford for bravery, empowerment or courage — as if courage is what it would take for a woman approaching 50 to bare flesh that’s slightly slack after giving birth to two kids.

Then there’s the reaction that insists Crawford au naturel is a beautiful sight — as if being beautiful is what defines a woman and only the interpretation of what is “beautiful” is in question.

Another reaction, maybe the most prevalent, is how disappointing it is to see the model in the state she’s in, subject to gravity and aging.

Some observers try to have it both ways.

“It’s reassuring that even supermodels succumb to the passing years, but there’s nothing wrong with a little re-touching sometimes,” wrote former Cosmopolitan editor Linda Kelsey in the London Telegraph.

“A part of me wants to shout to an unforgiving world: ‘Yes, women age, get over it.’ But when I look at this picture of Cindy I can’t help feeling it’s unflattering and not one I especially want to linger over.”

The headline on the story: “Please Cindy, just cover it up now.”

We’re so used to seeing women enhanced, whether digitally or surgically or cosmetically, that nobody wants to “linger over” — that is, to look at — a woman who hasn’t been photo-shopped or otherwise improved.

There’s nothing wrong with trying to look good, of course, and who doesn’t want to look younger and smoother and more toned, when that’s what’s expected of women, and any woman, as she ages, who wants to stay in the game has to play by the rules.

But now the expectations are so absurdly beyond reality that an untouched photo of a woman who is fit, healthy and attractive — a supermodel, no less — is top of the news.

The bar has been set so high that aging women in real life without benefit of enhancement — like this photo of Crawford — are deemed unacceptable, a total turn-off.

“If older women are finally having their moment – on screen, on the catwalk, and in advertisements for hair and beauty products – I think we have to be prepared for the fact that what we see in these images involves a degree of deception,” writes former Cosmopolitan editor Kelsey

“I don’t believe for a moment that Helen Mirren hasn’t had work and that her photographs haven’t been manipulated.”

It’s been 24 years since Naomi Wolf wrote The Beauty Myth.

“The appeal (of the woman enhanced to appear younger and more sexy and near perfect) is not the fantasy that the model will come to life; it is precisely that she will not, ever. Her coming to life would ruin the vision. It is not about life.”

“The maturing of a woman who has continued to grow is a beautiful thing to behold,” observed Wolf. “Or, if your ad revenue or your seven-figure salary or your privileged sexual status depend on it, it is an operable condition.”