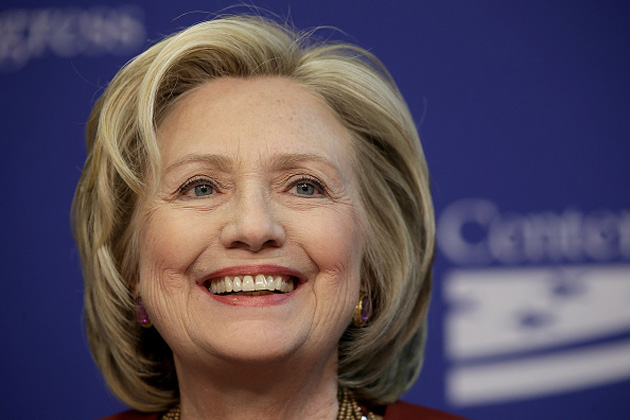 How glad I am that Hillary has announced that she’s running and looks likely to be the next president of the United States.

I’m thrilled at the idea of a woman being elected, for the first time, as commander in chief of the most powerful nation in the world.

I’m thrilled that my three little American granddaughters will, if all goes well with the Clinton campaign, grow up knowing the White House has no glass ceiling and that there’s no barrier to what a woman can be or do.

But I’m thrilled even more that it’s not just a woman but a grandmother who will make history as Madam President.

If the most powerful person in the world is a grandma, then referring to an older woman as a grandma can no longer be a put-down or a suggestion that her shelf life is over.

That put-down was evident in Maureen Dowd’s column in the New York Times on the weekend Clinton announced her campaign.
Dowd has been hostile to Clinton and sniping at her for years, well before her first run at the presidency eight years ago.

This time, she castigated her for “the ostensible and obscene $2.5 billion that she is planning to spend” on her campaign.

Except that Dowd didn’t write those last three words — “on her campaign.”

This is what she wrote: “the ostensible and obscene $2.5 billion that she is planning to spend to persuade us to make her grandmother of our country.”

Hillary Clinton is campaigning as the frontrunner for the Democratic nomination for president of the United States.

But in searching for yet another way to attack Clinton — the reference to her spending wasn’t damaging enough, it seems — Dowd reached for the ultimate zinger: grandmother.

I’d expect better from the New York Times. I also expect that during the coming campaign Clinton’s being a grandmother will be continue to be used often as a way to ridicule her and suggest that she’s over the hill, unattractive and unsuitable.

But if she’s elected — and it seems likely — all of us grandmothers including Clinton will have the last laugh. Once and for all, the stereotype of grandmother as superannuated little old lady will be blown to bits by the first woman elected President.

And as grand as that will be, I’m hoping it won’t be too long before a woman will be elected Prime Minister of Canada.