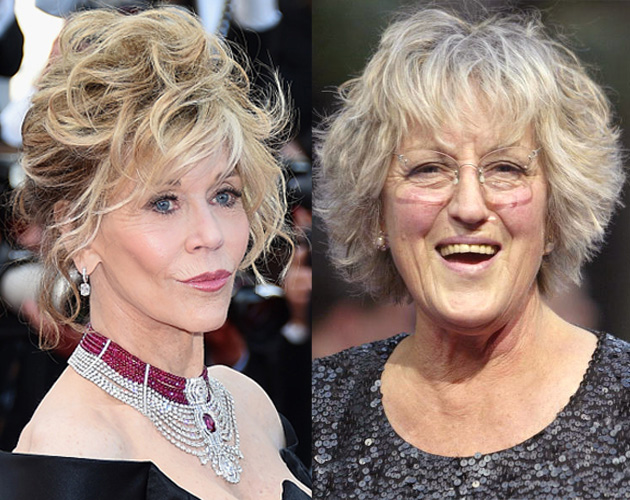 Each represents an opposite approach to aging for women.

Fonda was talking about how important it is for an older woman to do everything possible to try to look younger.

Fonda’s face in the Telegraph photo looked smooth and firm — just as it does on the June cover of Zoomer. She looks at least 20 year younger than her age of 77.

Greer’s face was deeply wrinkled. She looked every bit her age of 76.

It all began when Fonda told the Telegraph, “It is OK for men to get older, because men become more desirable by being powerful. With women, it’s all about how we look. Men are very visual, they want young women. So, for us, it’s all about trying to stay young.”

Fonda’s current beau — you’ll find the details in the Zoomer profile — is 72.

The Telegraph added, “Unusually for someone in her position, Fonda has been open about her efforts in this department – having cosmetic surgery on her jowls, eyelids and the bags under her eyes.”

She’s also had knee and hip replacements and a metal implant in her spine.

The day after this appeared, Greer weighed in with her typically pointed but pragmatic rebuttal.

The headline in the Telegraph: “Germaine Greer vs Jane Fonda: ‘Poor old Jane has a replacement hip but not a replacement brain’.”

“Germaine Greer says Jane Fonda has spent a fortune on surgery but should stop pretending to be young.”

Speaking at the Hay Festival, Greer told the audience, ““I read Jane Fonda today saying men want younger women so we have to try to look young. Jane! Why not say older women want gorgeous boys? Men want younger women? So let them want. There’s no shortage out there.

“You don’t have to pretend to be one.”

So which of these women has the right idea about getting older?

Is it better to try to maintain youthful looks and continue to be seen by men as attractive, whether with “anti-aging” creams from the drugstore or serial surgeries or something in between, including hair colour?

Or is Greer’s “authentic aging” the better idea: letting go and becoming invisible, stepping off the treadmill of trying to remain attractive altogether?