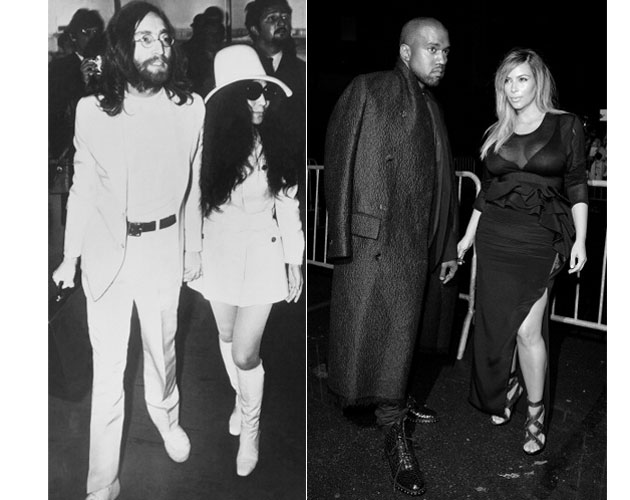 Okay, before you yell expletives at your computer screen, hear me out for a moment.
These two artists have much more in common than you think. From choice words and controversial sound bites to fashion choices and female companions, it’s hard to deny that West is this generation’s Lennon.

John Lennon and Kanye are both “Genius”

Modesty is not a word anyone would use to describe Lennon or West. Lennon once said, “If there’s such a thing as genius – I am one. And if there isn’t, I don’t care.” And in an interview with Jimmy Kimmel last year West said, “For me to say I wasn’t a genius, I would just be lying to you and to myself.” At least they’re honest. But who could argue with either one of them when it comes to their work. Lennon – considered avante garde at the time – completely changed the way music was made. A pioneer in the industry, the brilliance behind his insightful, eloquent and timeless writing could not be overstated. Arguably the most talented Beatle, Lennon spearheaded a new age of music and is considered even more a genius now than he was then. Without him, many artists we know and love wouldn’t be creating music today.

West can be considered a pioneer of his genre. In a time of thug rap, West brought his own preppy take on hip hop, broadening the genre to listeners who thought it was nothing but gunplay. West has won 21 Grammy awards making him one of the most awarded artists of all time and Time named him 100 most influential people in the world in 2011.

They Are Hopeless Romantics

Kanye West is a solo artist, but we’re sure if he were part of a group, his reality star fiancé would have put a wedge in it all ready. We all know how much Lennon loved Yoko Ono; Lennon described their relationship in the most romantically clichéd way, “Before Yoko and I met, we were half a person. You know there’s an old myth about people being half and the other half being in the sky or in heaven or on the other side of the universe or a mirror image. But we are two halves, and together we’re a whole.” While West now says, “Our love story’s a love story for the ages.” And “I loved her from the first day I saw her.”

RELATED POST: The Beatles Personality Quiz: Which of the Fab Four Are You?

To speak further on their love lives, Kim Kardashian and Yoko Ono are eerily similar. Not esthetically, of course. We can’t imagine Yoko Ono glowing from a fresh spray tan in a leather peplum, whipping her hair extensions away from her heavily foundationed face. What we are referring to is the criticism of Kardashian and Ono and Lennon’s and West’s eager defence of the women they love.

When the world saw Lennon fall head over heels in love with Ono, fans had just as much to say about Ono as West’s fans have to say about Kardashian. Fans thought Ono was a talentless hanger-on who distracted Lennon, contributing nothing to his creative process. Sound familiar? Kardashian has also been criticized for being a talentless famous person who is holding onto West’s coat tails.

But Lennon did nothing but champion his companion – as does West. “It wasn’t that she inspired the songs. She inspired me,” Lennon said of Ono. West told Ryan Seacrest in an interview, “It’s an unfair level of awesomeness in one person to be that smart, to be that nice to be . . . blatantly fine as hell. Like, one of the most beautiful people of all time.”

Presidents Aren’t Fond of Them
President Richard Nixon was not fond of John Lennon because he was afraid his protest of the Vietnam War would ruin his presidency. Lennon’s dreams of peace and love did not exactly endear him to Nixon’s administration. Lennon went to New York on a work visa in 1971, met up with radical anti-war activists and was put under FBI surveillance. Immigration and Naturalization Service tried to deport him a year later. For much of ’72 and ’73, he was under orders to leave the country within 60 days but, thanks to his legal help, his deadlines were consistently extended.

This is where West one-ups Lennon. We can’t say that any president’s dislike for West have gone as far for him as they did for Lennon but, in West’s case, there are two who won’t be inviting him over for dinner anytime soon. Just what was Bush thinking after West candidly told America that Bush didn’t care about black people? Oh right, he called it the worst moment of his presidency. Obama has also been clear about his opinions of West. After West infamously interrupted Taylor Swift’s acceptance speech, Obama said,”The young lady seems like a perfectly nice person. She’s getting her award. What’s he doing up there? He’s a jackass.” Two years later, Obama still referred to West as a “jackass” but added that he thought he was talented.

They Are “Bigger than God”
Who could forget when Lennon said the Beatles were bigger than Jesus? Refresher: “We’re more popular than Jesus now; I don’t know which will go first, rock ‘n’ roll or Christianity.” And Kanye has had his very public opinions about Jesus. First of all, he named his latest album “Yeezus” with a track called “I Am a God.” He told W magazine last June, “I made that song because I am a god…I don’t think there’s much more explanation. I’m not going to sit here and defend shit. That shit is rock ‘n’ roll, man. That shit is rap music. I am a god. Now what?”

And you thought that headline was a stretch.