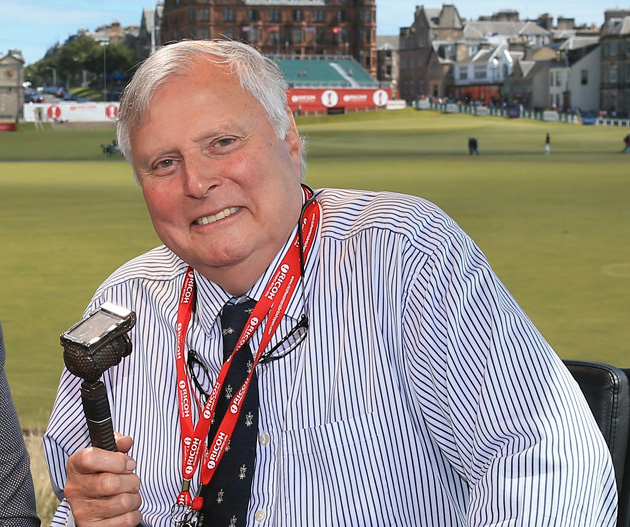 Is it okay if I feel sorry these days for old men?

Old men who say things that were okay to say not so long ago?

Veteran British golf commentator, 84-year old Peter Alliss, made what the London Telegraph calls his “on-air gaffe,” provoking a “sexism storm” during the BBC broadcast of the British Open at St. Andrews.

While the camera focused on the wife of golfer Zach Johnson, as he was sizing up his winning putt, Alliss remarked, “She is probably thinking, ‘If this goes in, I get a new kitchen’.”

An earlier “gaffe” came when young Irish amateur golfer Paul Dunne left the course and was hugged by his mother.

“Ah, that must be mum,” said Alliss. “Perhaps he likes older women. I don’t know but I hope I got the right one.”

Both comments, but especially the one about the kitchen renovation, provoked accusations of “casual sexism” and “old school sexism” on Twitter. Also, “Can’t believe he can say this!”

The BBC offered an apology.

“Peter made a light-hearted comment which was inappropriate and we apologise if anyone was offended.”

Alliss isn’t the only old man to suddenly find that his banter is outmoded and regarded as bigoted.

Last week, the 94-year old Duke of Edinburgh asked a group of women at an English community centre, “Who do you sponge off?”

The elderly royal’s remark was duly noted as offensive, although one of the young women thought he was not out of line.

“He was just teasing,” she said “and it’s similar to what I call my husband – the wallet.”

And then there’s Bill Cosby.

And yes, I feel a little bit sorry for him too, even if that’s not okay.

I recognize, that unlike remarks that may be considered sexist (or not), Cosby’s deplorable actions were actual assaults. There were victims.

There’s no excuse for date rape. It’s a crime, plain and simple, even more awful because the criminal is Cosby.

But there’s a context to his crimes that make me admit to a smidgen of sympathy for this fallen idol with feet of clay, an uncontrolled libido and an incomparable penchant for power tripping.

The earliest attack, according to his accusers, was 50 years ago.

Hillary Clinton was a high school senior. The casting couch was a fixture and not just in Hollywood. Newspaper editors hired young female interns and reporters based on their potential not for scoops but for sex. The birth control pill erased the risk of pregnancy. Playboy bunnies were proliferating. Sex was everywhere and easy. Darling, starring Julie Christie as “an amoral model who sleeps her way to the top of the London fashion scene” (according to IMDB) was the hot movie of the year, pre-dating Amy Schumer’s Trainwreck by a half century.

All this isn’t to excuse Cosby or to deny the harm he did to his victims. I’m suggesting that he, like many other men at the time – and until fairly recently – took what they wanted from women who were, at the same time, often willing to comply or, at least, to foolishly take medication prescribed by a comedian in intimate situations.

And then, Cosby just kept doing what he was doing, as do the old men who still joke about women sponging off men and lusting after new kitchens.

Maybe someone should write An Old Man’s Guide to Conversation and Behavior in a New (Politically Correct) World. Maybe I will.

In the meantime, let’s recognize where they’re coming from – way back in the last century.