Will this Election be a Close Shave — or a Trimmed Beard? 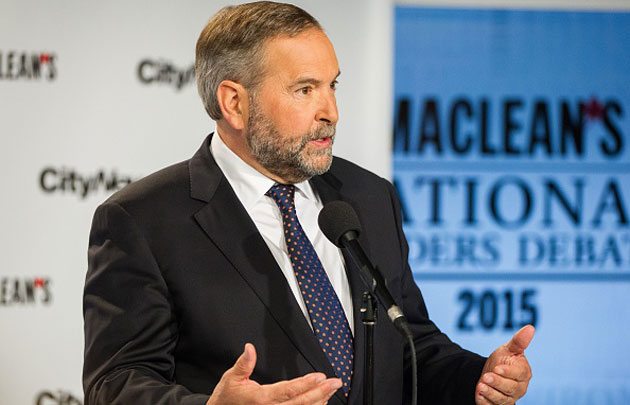 It’s not surprising that Thomas Mulcair is the frontrunner in this election race, which is more like a slow trot to the pumpkin patch.

But it may not be the platform and policies of the NDP that are putting Mulcair ahead.

I’m pretty sure it’s his beard.

There’s something about a neat salt-and-pepper beard that signals steadfastness.

Mulcair’s beard makes him look like a figure of authority should look. Trudeau looks like he should be elected prom king. And Harper got elected in spite of how he looked — like an earnest aging boy scout — not because of it.

Even if they tried, neither Trudeau nor Harper could pull off the bearded look with the aplomb of Mulcair.

Mulcair’s beard inspires confidence. It suggests maturity, wisdom and manliness. Maybe it’s because so many respected historical leaders had bedecked jaws that a beard conjures up trust and votes.

Our first prime minister, Alexander Mackenzie, had a beard. So did King George V. Also Abraham Lincoln and George Washington. A bearded Sir Mackenzie Bowell became minister despite his unfortunate surname. Charlton Heston playing Moses had a beard. (And so did those noted, er, left-wingers, Karl Marx and Fidel Castro.)

A man assumes a certain dignity when he sports a beard. It sets him apart from the masses of clean shaven men with chins as smooth and undignified as a baby’s bottom.

When a mouth encircled by fur speaks the word “change,” it’s not just another election cliche. It has resonance.

I am not making this up.

They studied 154 species of primates to see how they use physical “ornaments” and “badges” — including beards on males of our species — to stand out. The researchers found that male primates who live in larger, multilevel societies use flamboyant and conspicuous markers to signal “identity, rank, and dominance” (and, not incidentally, “attractiveness” to females).

“We need a quick, reliable tool to evaluate someone’s strength and quality, and that’s where these elaborate ornaments come in,” explained Cyril Grueter, lead author of the study published in Evolution and Human Behavior.

Another study showed that if a man has a thick beard, but is seen only with clean-shaven men, he has a distinct advantage over them.

Researchers recruited 1,453 women and 213 men who were asked to rate the attractiveness of different images of men’s faces.
Some of the participants were shown mostly “full” beards, while others were shown images of mostly clean shaven men. A third group was shown a mixture of several types of facial hair, from none to bushy beards.

The more rare a facial hair type, the more attractive it was to both men and women.

Would a clean shaven Mulcair win as many votes?