Why Is This Man Smiling?: 5 Reasons for Nigel Wright’s Grin 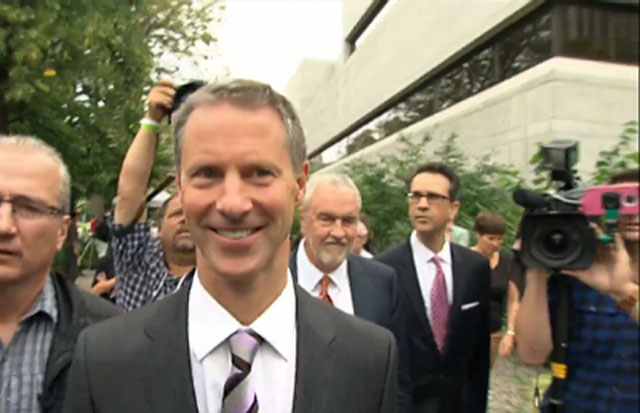 Nigel Wright, the former Chief of Staff to Prime Minister Stephen Harper, appeared in court today to testify about both his role in the Mike Duffy expense scandal and to explain what the Prime Minister’s Office knew about the $90,000 Wright loaned Duffy.

Curiously, however, on his way in and out of the courthouse – both at the beginning of the day and during breaks – Wright sported a wide smile under pressure, particularly when flanked by a throng of reporters desperate for a quote or sound bite. Why, many wondered, is this man smiling? We’ve got five theories:

5. Just before being dismissed for lunch, Mike Duffy stopped him in the court hallway, told him he forgot his wallet and asked if he could bum some lunch money.

4. Wright found out that, given his penchant for handing out cash, there’s a chance he could nab a spot on the next season of Dragon’s Den.

3. You’d be smiling too if you looked that dashing in a tailored charcoal suit and your name was literally Mr. Wright.

2. He finally binged-watched the first season of the comedy/drama Transparent last night and was remembering some of the funniest lines. He certainly wouldn’t have been allowed to watch a show like that while working for the Conservatives, especially given the fact that the Prime Minister’s Office clearly doesn’t seem to know the meaning of the word “transparent.”

1. There’s only so many times you can say that the Prime Minister didn’t know anything fishy was going on with a straight face.