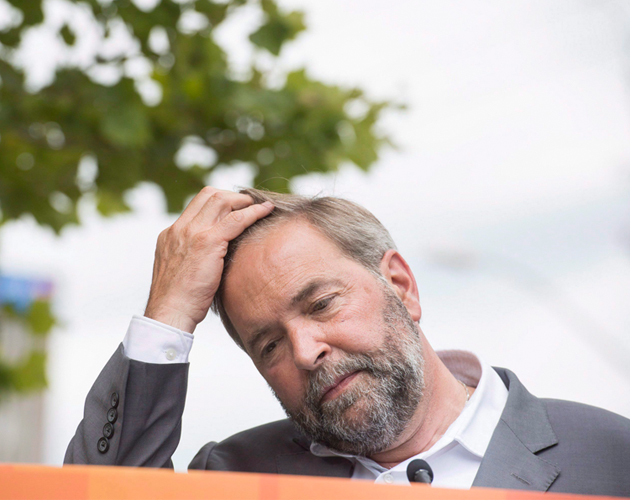 While NDP leader Tom Mulcair basks in the glow of leading the polls, he’s quickly learning that it’s not always easy at the top.

Not only has the NDP’s first-place standing provoked aggressive attacks from both the Liberals and Conservatives but it’s also brought a more intense scrutiny from the media. But perhaps most alarming, it’s provoked the so far silent left-wing faction within the NDP, which has begun to air their grievances on the party’s new political direction.

On Sunday, a National Post article notes that both the Liberals and Conservatives attacked Mulcair’s spending promises this weekend, claiming there’s a “multibillion-dollar hole” between the NDP’s platform and it’s promise to balance the budget. Liberal MP John McCallum was particularly critical, saying “Tom Mulcair is not telling the truth to Canadians. He’s offering a phoney set of promises that he has no intention of keeping.” This has led to obvious speculation that the NDP is sitting on plans for a huge tax increase that it won’t yet reveal.

Because there’s nowhere for a first-place party to hide, the Toronto Star ran an opinion piece that cites five weak spots in the the NDP’s election campaign, including its “tax-and-spend image”, “lack of experience” and “internal splits” within its own party.

The latter point on internal division is a large one. Mulcair has led the charge to first place by running to the centre of the political spectrum. It’s a risky strategy: while it’s won him support from moderate voters, it’s also alienated the NDP’s base, the staunch left-wing loyalists.

There are now signs that the party’s socialist base is ready to air what the Toronto Sun calls: “skepticism of Mulcair’s sincerity.” Barry Weisleder, chairman of the NDP socialist caucus, tells the National Post that he’s worried that Mulcair’s adoption of conservative fiscal policies has gone too far, effectively silencing the left-wing elements in the party.

But it’s not only the party’s centre-right fiscal policy that’s worrying the old NDP guard. The Socialist Project recently published an online bulletin decrying the fact that Mulcair is further betraying the party’s left-wing by clamping down on candidates who criticize Israel.

How well Mulcair manages to fend off attacks from opponents and appease the soul of the party will ultimately determine whether the NDP retains its comfortable lead in the polls.