In Praise of the Missing Elizabeth May 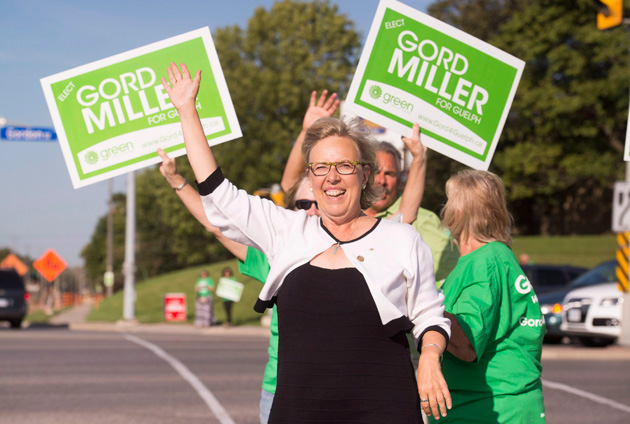 She came off best at the Maclean’s debate last month but Elizabeth May won’t be seen again at the party leaders’ debates, starting with the Globe and Mail debate scheduled for Thursday.

Why is she missing in action?

Some people think it’s because she’s just too good, showing up the big boys with her easy manner, obvious smarts, command of the facts and straight-shooting analysis.

Others think she’s been eliminated because she’s playing a different game, one that automatically and unfairly lets her shine.

Unlike the leaders of the Big Three who will be debating Thursday night, May has nothing to lose. This does gives her more freedom to say what she thinks, to show what she knows and to stay loose — an obvious advantage over the guys who have to work on a tight leash.

Also, say some pundits, because May is not a contender for Prime Minister she therefore has no place among the contenders and would serve only as a distraction.

But her defenders say she deserves to stand with the other party leaders for several different reasons.

Anne Kingston, writing in Maclean’s has five “non-partisan” reasons for including May:

1.She brings welcome diversity.
2. Her focus on issues highlights political blustering.
3. She sets a candour baseline.
4. On-site fact-checking on the environment file.
5. She serves as an active reminder of federal female political representation.

Meanwhile, Warren Bell, writing in the National Observer has one very partisan reason for why May hasn’t been included.

“Harper’s afraid – he knows – that if he were to engage in a fair debate against Green Party leader Elizabeth May, in public with millions of Canadians watching, he’d lose.”

He lists four reasons why Harper would lose to May in a debate:
1. May understands climate change. Harper doesn’t want to.
2. May is a far more skilled presenter than Harper.
3. She knows Harper is trying to subvert Canada’s democratic institutions.
4. May is every bit as smart as Harper, if not more so.

“Elizabeth May,” says Bell, “is a seasoned, deeply intelligent, ethically driven extrovert with a life-long history of confronting large and powerful political dragons with solid documentation and slaying them dead.”

And, he says, she has “a deeply informed, steel-trap mind…”

The missing May will be missed.