Let Paris be a Red Line Beyond which Terrorists Cannot Go 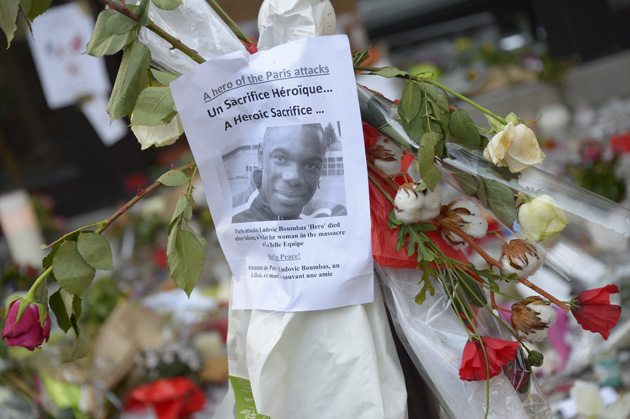 A placard bearing the picture of Ludovic Boumbas, one of the victims, at a memorial at the site of the attack at the Cafe Belle Equipe on rue de Charonne on November 18, 2015 in Paris. BERTRAND GUAY/AFP/Getty Images

I am not a big fan of sentimentality so I wasn’t all that impressed by the guy who brought his piano to Paris so he could play “Imagine” at the Place de la Republique.

My thinking is more in tune with that of London Telegraph columnist, Allison Pearson.

“This butchery of innocents,” she wrote, “cries out for vengeance, not some plonker who set up a portable piano and tinkled ‘Imagine’ to credulous reporters. Not votive candles and wishful thinking about the brotherhood of man.”

I guess it’s okay for people to find and seek comfort in any way they can, even if it involves trying to fend off the abyss with street shrines and teddy bears.

But softening the awfulness with sentimental kitsch and stuffed animals is not the response I favour.

Do these swaggering suicidal death cultists with Kalashnikovs see themselves as macho heroes, defending their faith?

I’ll tell you who the heroes are — and they are people of many faiths, including Muslims, and many backgrounds, including Middle Eastern.

We are hearing about them daily now in the aftermath of the massacre, a week later.

Yannick Minvielle, father of one, shot dead with a bullet through the head when he jumped in front of his girlfriend as one of the Bataclan terrorists prepared to shoot her.

Ludo Boumbas, IT engineer of Congolese origin who moved to Paris a few years ago, threw himself in front of a hail of bullets to save his friend Chloe Clement at La Belle Equipe restaurant. They were celebrating the birthday of Tunisian friend Houda Saadi, who died along with her sister Halima in the arms of their brothers, Khaled and Bashir.

Elsa Delplace shielded her five-year old son Louis, with her body. He was found alive, dripping with his dead mother’s blood and body fluids, as if emerging from her womb once again as she gave him life.

Antoine Leiris, whose wife Helen Muyal-Leiris, mother of their toddler son, died in the attack, declaring, in an open letter to the terrorists, “On Friday evening you stole the life of an exceptional person, the love of my life, the mother of my son, but you will not have my hatred.”

(Stuffed teddy bears, I think, are little comfort to that child whose mother disappeared into the Paris night.)

The heroism and the stubborn determination to celebrate life and love make me even more furious with the nihilist killers.

I look at the pictures and descriptions of the people who were cut down in the Paris bloodbath and the litany of loss is almost unimaginable: American student Nohemi Gonzalez, Moroccan newlywed Akram Benmbarek, Chilean grandmother Patricia Nunez…

I’m sick of the indiscriminate slaughter, the rapes and the stabbings, sickened by the crucifixions and beheadings.

Whatever it takes to stop this, I am for it, whether it means more military action, intensive spying and hacking, strange bedfellows as allies, more money for integrating immigrants here and abroad.

I’ll even put up with less privacy and more stringent travel inspection (although no Canadian grandmother over the age of 65 has ever been found to be a security risk).

Honestly, I don’t know how to stop this. All I know is that the world leaders we’ve entrusted with our lives and the future of our children and grandchildren better find a way.