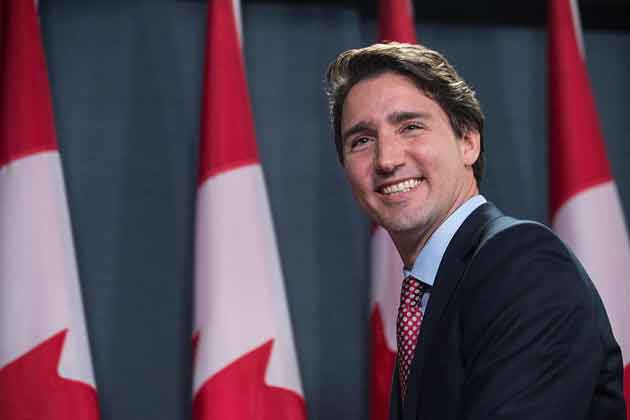 The days are disturbingly brief with the winter solstice less than a week away.

The unseasonable warmth coupled with gloomy dampness feels wrong even if it’s a relief not to be swathed in snow gear.

Nevertheless, these are sunny days indeed for Canadians, dull skies and swooning loonie aside.

We’re warmed by the good feelings of doing good as a nation, joyfully welcoming Syrian refugees when many other countries are turning their backs.

And there’s ample scientific evidence that generosity and altruism brings benefits even beyond superficial warm feelings.

“A strong correlation exists between the well-being, happiness, health, and longevity of people who are emotionally kind and compassionate in their charitable helping activities.”

That’s the conclusion of a respected bioethicist writing in the International Journal of Behavioral Medicine.

We’re also basking in the world’s attention to our comely new first family, a made-in-Canada mirror image of the young royals across the pond. We’re proud of entrusting the country to a new generation, not yet jaded, eager to change the world.

An NYT editorial praised Trudeau’s “”personal warmth and leadership” in meeting Syrian refugees at the airport.

And, if truth be told, we Canadians are also now enjoying a flicker of schadenfreude — that delicious feeling of pleasure at another’s misfortune — regarding the shenanigans across the border.

The political climate in the U.S. is weirder even than the weather.

We’ve always felt a little superior to Americans (or should that be inferior?).

As 2016 approaches, with crackpot Trump leading the Republican polls, Hillary reviled by as many voters as she’s revered, and aging socialist Bernie galvanizing the far left (more than likely to no avail), Canada seems like a model of progressive civic serenity compared to the wackiness in the U.S.

So yes, for now let’s bask in these sunny days and revel in the festive lights and joys of the season because there are dark clouds on the horizon and threatening weather may not be not far off.