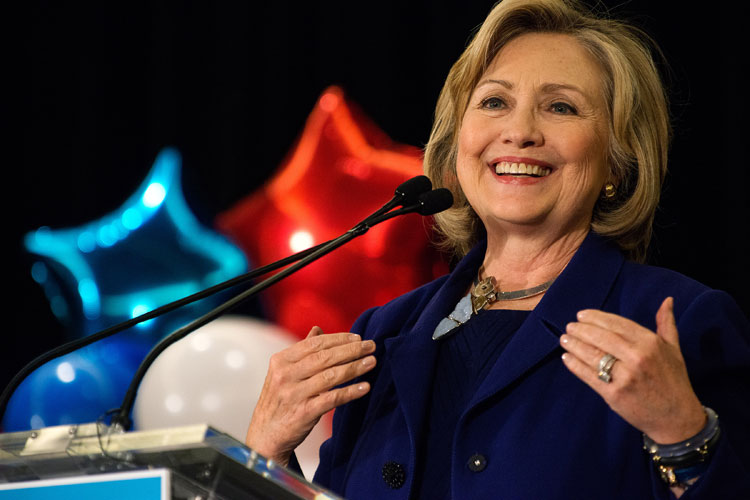 It was said that Ginger Rogers had to do everything that Fred Astaire did, but backwards and in high heels.

President Obama, reminiscing about his bruising campaign for the Democratic Party 2008 presidential nomination against Hillary Clinton, recently said the same thing of her, noting that she had to get up earlier on the relentless trail with its punishing schedule to get her hair and makeup done, something he didn’t have to worry about.

It was a long way from “You’re likeable enough, Hillary,” his infamously patronizing comment during that election, said while looking down and writing a note, when Clinton’s  “likeability,” a constant Achilles heel in decades of polling and focus groups, was put to her by the debate moderator.

On the same stage, the soon to be disgraced Senator, John Edwards, also agreed that Clinton was likeable enough, but made it clear he did not find the jacket she was wearing that night likeable at all. No questions were asked or comments made about whether the male candidates were likable or what they were wearing.

Clinton was used to this. In her journey from Valedictorian, to lawyer, to political spouse, to Senator, to Presidential candidate, Clinton  had been witheringly criticized for her hair-dos, her hair bands, her pantsuits, her cleavage, her voice and the tone of it — basically for all the “female “ things.

This is probably why in that ’08 campaign Clinton chose to hold the gender card, running as Commander-In-Chief, except for tearful breakdown at a pivotal point in New Hampshire that stalled Obama’s momentum for a time.

This year, in her second bid for the Democratic Presidential nomination, which she looks sure to lock up, Clinton is running against Senator Bernie Sanders who effectively neutralizes the ageism problem, though last time around she was of course criticized for looking old.

This still leaves her holding the gender bag.

And she is going there, running as Grandmother-in-Chief, with a pledge to Make America Whole Again.

With a long history of championing feminism —  from using her maiden name as the First Lady of Arkansas until it became political kryptonite to do so, to stating “Womens’ Rights are Human Rights” while in China as First Lady of the United States —  isn’t it ironic that perhaps the most feminist thing for her to do at this point in her trajectory is to double down on being female?

During her husband’s 1992  campaign for President, she said, “I am not some little Tammy Wynette standing by my man and baking cookies.”

Of course, a backlash ensued from offended women who worked in the home.

A factor was President  Clinton’s “bimbo eruptions” — in itself, a sexist characterization of the women involved  — which continued to make news culminating in the Monica Lewinsky scandal. That Clinton was known to be in the “war room” that discredited the women, some of whom were her husband’s staffers and who have claimed to be coerced and that she stayed with him after the Lewinsky matter has made her a complicated figure to other women, especially younger ones who grew up in a culture that takes harassment, especially in the workplace, more seriously now than then.

In fact, younger women have a complicated relationship with feminism, with many eschewing the word and figuring the battles, such as they were, have been won despite scads of evidence to the contrary on a range of issues such as equal pay for equal work to honour killings.

Few would understand the tribalism inherent in Clinton surrogate, former Secretary of State Madeline Albright’s statement on the 2016 campaign trail that “there is a special place in hell for women who do not help other women.” And indeed a backlash ensued.

Clinton’s other Achilles heel has been her perceived dishonesty — the investigation into her emails is a self –inflicted wound that does not help – and her so called inauthenticity  — perhaps because she lacks her husband’s easy charm or Obama’s soaring charisma. But who does? She has characterized the problem as “people wondering if she is in it for herself,” rather to serve and help others.

How dare a woman have ambition and pursue power to better bend the world to her view. She must mask it and be a supplicant while doing so. Another thing, like wearing heels, that Sanders, Trump, Cruz, Rubio and Kasich will not have to navigate as the political circus rolls on.

The speech Clinton gave in ’08 when she finally conceded to Obama, who had received fewer votes but more delegates before heading to the Democratic convention, was the only one of hers that came close to one of his barn burners.

“Although we weren’t able to shatter that highest, hardest glass ceiling this time, thanks to you, it’s got about 18 million cracks in it,” she orated. “And the light is shining through like never before, filling us all with hope and the sure knowledge that the path will be a little easier next time.”

She went on to support Obama in the general election and to serve as his Secretary of State. That last role makes her among the most qualified people in the history of America to ever run for the nation’s highest office.

Which is why on International Women’s Day, we should all have the chant of Run Hillary Run in our hearts. For as she said back during that ‘08 concession speech, “As we gather here today, the 50th woman to leave this earth is orbiting overhead. If we can blast 50 women into space, we will someday launch a woman into The White House.”

And that woman will never speak about the size of her hands.