The Politics of Women as ‘Persons’ 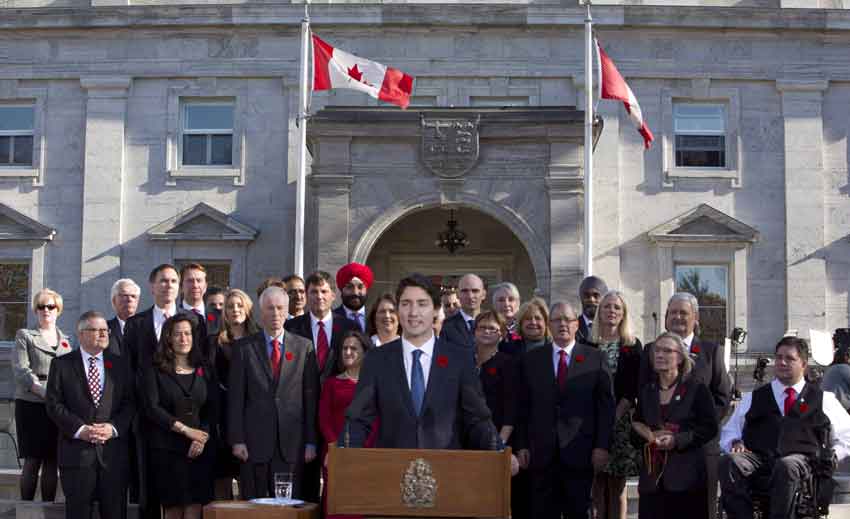 Prime Minister Justin Trudeau holds a news conference with his cabinet after they were sworn-in at Rideau Hall, the official residence of Governor General David Johnston, in Ottawa, on November 4, 2015.

“Because it’s 2015.” That was Justin Trudeau’s rather succinct retort to the question of why he appointed a gender-equal cabinet this past fall, the first Canadian Prime Minister to do so.

It wasn’t the first time that advancing gender equality would play out in one of our political institutions.

This time last century it was the Senate. At that time the Upper House remained a men-only chamber. It would take five women (the Famous Five, as they became known), a challenge of our highest court and a ruling all the way from London for that to change. And all because women weren’t yet ‘persons’ under the constitution (the British North America Act as it was then) as unanimously ruled by the then all-male Justices of the Supreme Court of Canada.

Those “Famous Five,” all women and all Albertans incidentally, were led by Emily Murphy. A judge herself and the first female one in the British Empire no less, Murphy took up the charge to have the Red Chamber doors opened to women and challenge the Court Justices’ assertion that no penis equaled no person.

Wherever you land on the debate of the merits of our Senate, feminists owe the Upper House a thank you for instigating an important leveling of the political playing field some 90 years ago.

Nearly a century later, of 105 Senate seats 28 are held by women, and with 23 vacancies the Prime Minister has the chance to make it gender equal as well – that is if he doesn’t abolish the Red Chamber entirely. While over in the Green seats, there are a record 88 women Members of Parliament – progress but still only 26 per cent of the total. And when it comes to provincial/territorial leadership (we hit a record in 2013 with six), women currently sit at the helm of three provinces including Rachel Notley in the Famous Five’s home province of Alberta.

The Famous Five’s appeal landed in Canada’s highest court at the time, across the pond. And in 1929 London’s Privy Council overturned the Canadian Supreme Court’s ruling. Women were in fact persons, by law. In his announcement of their decision, Lord Chancellor John Sankey added that, “The exclusion of women from all public offices is a relic of days more barbarous than ours.” A little less concise than Prime Minister Trudeau but the underlying message was one in the same. It was about time.

Nellie Mooney McClung, 1873–1951, a suffragist, author and member of the Alberta Legislature

Louise Crummy McKinney,1868–1931, the first woman elected to the Legislative Assembly of Alberta, or any legislature in Canada or the rest of the British Empire

Henrietta Muir Edwards,1849–1931, author and a founding member of the Victorian Order of Nurses