#Elbowgate: Kids Carrying on in Parliament 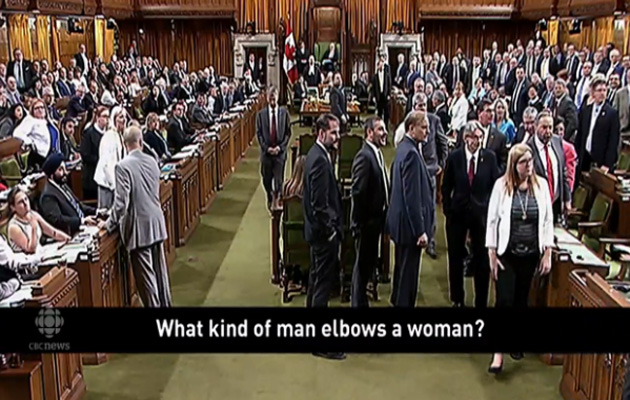 See what happens when we boomers let Generation X and Millennials take over and run the country?

The kids are carrying on in Parliament like it’s a preschool playground.

So much for Canada’s reputation for making nice.

So much for sunny days and sunny ways.

It was more like “Get out of the way” at yesterday’s fracas in Ottawa.

Our Gen X Prime Minister marched over to grab Minority Whip Gord Brown and escort him back to his seat so the vote about assisted dying could proceed.

Brown was surrounded by a bunch of NDPers who were acting as if they were guarding LeBron James from scoring a three-pointer.

Our Prime Minister, perhaps stronger than he realizes after all that weight lifting and yoga posing, accidentally jabbed his elbow into a segment of the anatomy of Millennial Member of Parliament Ruth Ellen Brosseau, who was standing behind.

There are conflicting reports about whether it was her “chest” or her “ribs” that suffered the blow. The “bosom” word has been studiously avoided so far, but you get the idea.

The 32-year-old NDPer, previously dubbed “Vegas Girl” because she went to Las Vegas to celebrate her 27th birthday during the election campaign, claimed to be so grievously injured by the Prime Minister that she had to retreat from the House and sit out the vote.

“It was very overwhelming,” she declared.

So was Trudeau just being petulant and temperamental, having inherited the Fuddle-Duddle gene from daddy?

Or maybe, after apologizing earlier for the 1914 Komagata Maru incident and many demonstrations of his feminine side, he felt compelled to exhibit some alpha male behavior, parade his take-charge virility on that determined march and grab, and remind the populace that he had once worked as a bar bouncer.

Notice how his apology today referred to his “manhandling.”

As for Ms. Brosseau as victim of male aggression, a popular stance right now, the Prime Ministerial elbow accidentally colliding with her above-the-waist body was an opportunity not to be missed.

Somewhat ridiculous and certainly undignified, the entire episode at least couldn’t compare to what happens in some other arenas of government.

As the Washington Post noted, in prominently reporting Trudeau’s tantrum, “In December, Ukrainian Prime Minister Arseniy Yatsenyul was hoisted by his crotch by a member of parliament who, moments before, had handed Yatsenyuk a bouquet of roses.”

But with a Gen X Prime Minister and Millennials in the House, who knows what could happen next?