Why We Should Cut Melania Trump Some Slack 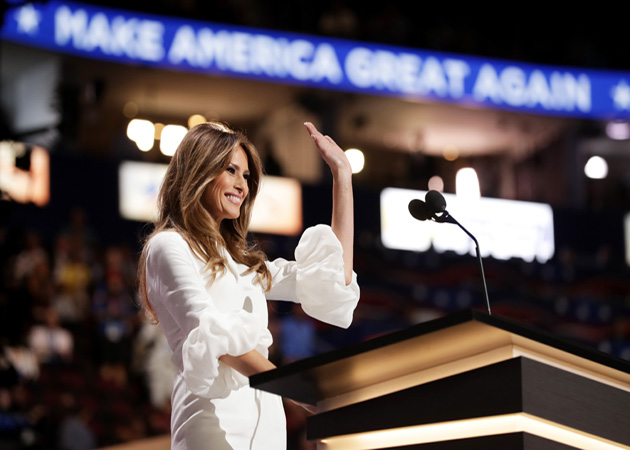 Let’s not blame Melania Trump for her speech—and let’s not make a big deal about the least awful misstep by the Trump juggernaut.

It’s not in me to feel sorry for sensationally gorgeous, fabulously wealthy, exquisitely groomed, smooth-skinned younger women with impossibly high cheekbones who also have a tush and a poitrine (forgive the foreign languages, but Yiddish and French seemed like the best choices under the circumstances) so perfect they can be wrapped and presented in a flashy white garment that clings like a second skin.

But feel sorry I do for Melania Trump, the stunning avatar of everything mentioned above, and wife of Donald.

It can’t have been easy for her to address the audience last night at the Republican convention in Cleveland.

Who, except an experienced public speaker, wouldn’t be nervous about taking the spotlight as the main attraction, speaking live on the first night of the convention, knowing it would be broadcast and watched by millions of people around the world?

Likely even more intimidating for her were her foreign accent—how many at the Republican convention even knew she was an immigrant (a big Republican no-no) and how many have no clue about the existence of Slovenia, let alone its whereabouts?—and her past as a nude model.

She had to know how much she’d be scrutinized, criticized and probably even fantasized about. But, like a good wife, she soldiered on, trying to convince us that her husband is a kind, loving, loyal human being with no hang-ups—which is a little like trying to turn lead into gold.

So there she was, doing The Donald proud, only to wake up this morning to be accused of plagiarizing Michelle Obama’s speech at the 2008 Democratic convention.

Suddenly, her promising debut in the public arena turned to disaster.

I think we should cut her some slack.

So let’s not blame Melania and let’s not make a big deal about the least awful misstep by the Trump juggernaut.

A lot worse was said, and it’s those awful, hateful thoughts and attitudes that ought to be scrutinized and denounced, not Melania’s debut.