Age Without Wisdom: 7 (of Many) Stupid Donald Trump Quotes 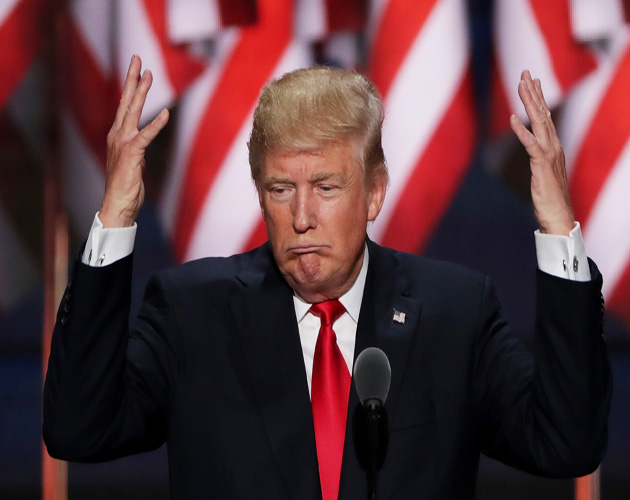 He may stand to become the oldest first-time American president in history, but Donald Trump, 70, continually proves that wisdom does not necessarily come with age.

Well, it’s official – as of last night at the Republican National Convention, Donald Trump is the party’s nominee for President of the United States of America.

Let that sink in for a moment: the man who’s famous for hair that looks like a woodland creature is taking a nap on his head, the number of fortunes he’s made and lost, the number of wives he’s wed and lost, and for declaring “You’re fired” to reality show hopefuls could be elected to the White House in November.

Still, if elected president, Trump, at 70, would make history as both the oldest, and the orangest, first-time U.S. president ever , beating Ronald Reagan by a year.

And yet Trump seems to prove on a daily basis the Oscar Wilde assertion that “With age comes wisdom, but sometimes age comes alone.” With that said, read on for seven of the stupidest things Donald Trump has ever said, while keeping in mind that something as simple as a hanging chad (remember Bush vs. Gore in 2000?) could make this man the leader of the free world in just a few months.

1. We all know how this turned out: “An ‘extremely credible source’ has called my office and told me that Barack Obama’s birth certificate is a fraud.”

2. Trump: Keeping it classy since 1946: “If Hillary Clinton can’t satisfy her husband what makes her think she can satisfy America?”

4. Sounds like the sort of thing a man with tiny hands would say: “My fingers are long and beautiful, as, it has been well documented, are various other parts of my body.”

5. We have a feeling that Trump doesn’t actually know what ISIS is: “What I won’t do is take in two hundred thousand Syrians who could be ISIS.”

6. Not only is this a direct quote from Trump’s Twitter, but he spelled “assaults” wrong. Genius.: “26,000 unreported sexual assults in the military-only 238 convictions. What did these geniuses expect when they put men & women together?”

7. We saved this for last because, well, nothing really tops bragging that you could date your own daughter: “I’ve said if Ivanka weren’t my daughter, perhaps I’d be dating her.”