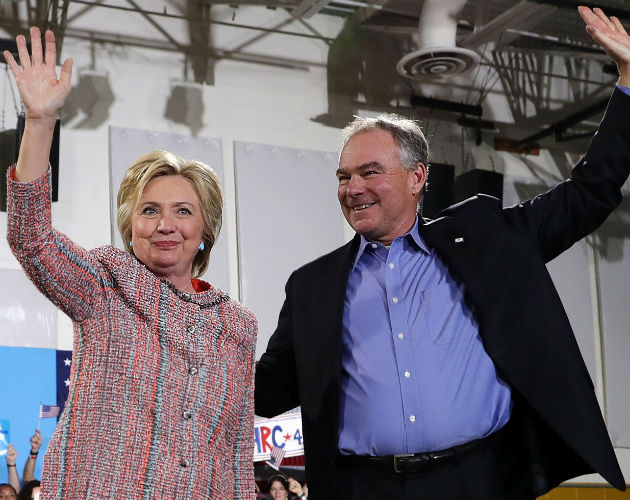 Kaine and his Republican counterpart, Mike Pence, an equally bland nominee for vice-president, pretty much cancel each other out. They’re both traditional choices: older white men with respectable political and personal records. (Kaine was a missionary—as well as one of only 20 people to have served as a mayor, governor and senator.)

This year, there’s no need for a colourful, attention-getting sidekick.

Both the presidential candidates this year are already revolutionary—Hillary as the first woman, Donald as the first, well, to put it nicely, unpredictable, politically incorrect, anti-politician.

What both needed—and settled on—were reassuring, traditional, calm, generally moderate running mates with long, stable marriages, with no sex or financial scandals, with the respect of colleagues, with years of political experience and with policies that pretty much align with their respective parties and presidential candidates.

Both would be competent in taking over as president, if necessary.

Some Democrats are likely disappointed that Clinton didn’t make a bolder choice, casting more to the left in recognition of Bernie Sanders’ supporters and success. The very left-leaning, 67-year-old Elizabeth Warren was on the list but, sadly enough, a ticket with a pair of two white women pushing 70, one liberal and the other even more liberal, would have sent many middle-of-the-road male voters, especially the independents, into the (circus) tent of Donald Trump.

Another near miss in the vice-presidential stakes was Cory Booker, the 47-year-old African-American junior senator from New Jersey. But again, the thinking in the end was that a ticket without at least one “traditional” candidate—meaning white male—would be off-putting for the blue-collar, Midwestern white men both Democrats and Republicans want to woo.

So the vice-presidential picks by both parties are a non-issue, practically a matched pair, two sides of the same coin gearing up for a gentlemanly tussle.

The presidential candidates, however, couldn’t be more different in every possible way—gender, lifestyle, experience, policies, leadership, world view and vision for the country. (They do have one thing in common: smart, confident daughters.)

At the top of the ticket, at least, it promises to be unlike anything we’ve ever seen in American politics.