Bill Clinton’s Life Is Like A Trip Through Boomerland 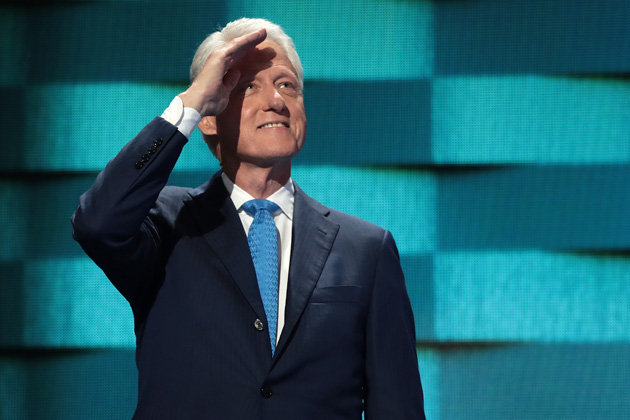 He was conceived three months after the end of the Second World War and entered the world on a hot summer day in a town called Hope (in Arkansas).

He managed to parlay his brains and charm—and the twinkle in his eye—to the presidency of the United States. And he was prescient in picking his spouse. Hillary will likely bring him back into the White House for at least another four years as First Gentleman.

Mapping Bill’s life is like a trip through boomerland.

He did the ’60s right, managing to have it both ways: establishment and anti-establishment. He got his law degree at Yale—you can’t get more establishment than that, or maybe you can, because he also studied at Oxford on a prestigious Rhodes scholarship.

But he also fought for civil rights in the American South where he grew up and he later admitted to smoking dope. Except that he insisted he didn’t inhale. Talk about having it both ways!

With his razor-sharp lawyerly mind and murky politician’s soul, he liked to let himself off on a technicality.

That was never more blatant than when he told the world that he “did not have sex with that woman.”

His statement, spoken sincerely to the camera on prime time TV, led to an international discussion about the definition of sex—sex being something we boomers, perhaps more than any other generation, have always enjoyed discussing, and, well, just enjoyed.

Especially Bill. There was a entire tag team of fetching, big-haired females at his beck and call, including one with the memorable and suitable name of Gennifer Flowers.

While whatever-you-call-it that he did with Monica Lewinsky—or was he just the innocent bystander of her lust as the Clintons seemed to want us to infer?—cast a shadow on his moral status (or should that be “oral”?) at the time, in the end, it really hasn’t done him any harm.

Women have forgiven him for his lapses in fidelity to the sainted Hillary and men, they may just have secretly admired him all along.

But all that belonged to the potency of his middle-age and political power.

At the age of 64, post-presidency, he had to deal with something many boomer men face: chest pain caused by cardiovascular disease. He underwent quadruple bypass surgery and became a different man.

He gave up the hamburgers and southern fried foods that had nourished him since childhood and became a strict vegan.

“He looks so skinny!” people exclaimed whenever he showed up on television.

Chelsea told ABC News, “He walks four times a week diligently wherever he is in the world.”

In this, too, in turning his wanton ways of satisfying his appetites into a disciplined, healthy way of life, depriving himself and driving himself, he was doing the boomer thing, aware at last that life can’t be about getting away with what feels good if you want to feel good and survive for a few decades more.

Mortality becomes a boomer concern once you hit 60 and Clinton, as with many other things, felt it even more than most this last decade and, typically, took forceful action.

After he left office in 2008, he established the non-profit Clinton Foundation. Its mission is all the good stuff: improving global health and wellness, reducing disease, increasing opportunities for women and girls, helping communities deal with climate change, creating opportunities for economic growth.

Who could argue with any of that?

Through 2016, the Foundation raised about $2 billion from U.S. corporations, foreign governments and corporations, political donors, and various other groups and individuals.

The problem, it turned out, was that Mrs. Clinton was then Secretary of State, negotiating with foreign entities and some of those foreign entities were major contributors to the Clinton Foundation.  There were also funds from wealthy political donors, corporations and others who, it’s been suggested, were looking for a tit-for-tat arrangement.

You can see the problem.

So could the Republicans and the ethics watchdogs who have accused the Clinton Foundation and Hillary in particular of, to say the least, questionable dealings.

Donald Trump is all over this, accusing the Clinton Foundation of ” a pay-to-play” relationship between donors and Hillary’s State Department, citing some leaked emails.

There have been other accusations, too, of playing fast and loose with the Foundation’s donated funds instead of putting most of them into charitable causes.

However, CharityWatch, a charity monitor, says that 88 per cent of the foundation’s money goes toward its charitable mission and gave the foundation an A rating for 2016.

In 2013, when Hillary left office, the Foundation’s name was changed to the Bill, Hillary & Chelsea Clinton Foundation.

And this week, Bill announced that the Clinton Foundation would no longer accept foreign or corporate money and that he would resign from its board if Hillary is elected.

It could easily be argued that this is too little and way too late.

If foreign and corporate money aren’t appropriate when she’s president, how is that they were acceptable when she was Secretary of State?

As always, Bill was using his Clinton Foundation to have it both ways — doing good but practicing some crafty, murky politics at the same time.

Now the Big Dog is a skinny besotted grandfather of two and a devoted spouse, paying Hillary back for all the years she stood by him and promoted his career while postponing hers.

And although so much about him has changed, mostly for the better, that twinkle in his eye and legendary charm are still as potent as ever.

That, too, is encouraging for the rest of us.