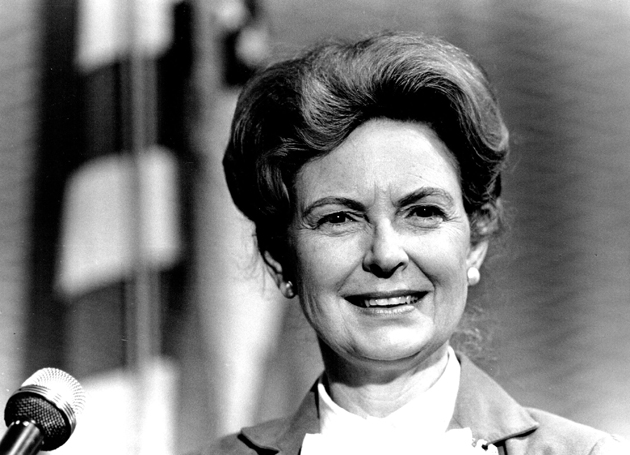 For Phyllis Schlafly, who died this week at 92, being on the wrong side of human progress and equality won her few friends and even more enemies.

The kids today won’t even recognize the name, but for those of us who came of age in the 1960s and who thought we were right about everything—meaning: politically and culturally left wing—remember Phyllis Schlafly as the enemy.

The ultra-conservative campaigner against abortion, gay rights and the Equal Rights Amendment died Monday, September 5 at the age of 92.

From the vantage point of 2016, Schlafly was just a fly in the ointment of human rights progress, a minor annoyance. But her role in transforming American politics, in pushing the Republican Party to the right, and in polarizing a nation, can not be underestimated.

She tapped into the same fiercely anti-government American mindset that’s currently pumping up Donald Trump, but she did with it feminine graces and a pose as a concerned housewife who believed all women would benefit by being stay-at-home mothers.

She let it be known that she breastfed each of her six children and taught them all to read before they started kindergarten.

Feminists working to get the ERA passed accused her of being out of touch with the vast majority of Americans because she was cosseted and protected by her rich lawyer husband and his wealthy family and the household help she could afford.

They accused her of being a hypocrite because, while she preached about women staying at home, she was a constitutional lawyer whose activism became a high-profile career.

Her political life began with speaking out against international communism in the 1950s.

She supported Barry Goldwater in his disastrous run for President in 1964. That was the year the Democrats’ iconic attack commercial showed a little girl picking petals off a daisy as she counted down from 10, when a nuclear bomb exploded.

A narrator asks voters to support ­Johnson on Election Day: “The stakes are too high for you to stay home.”

Schlafly’s candidate may have been badly beaten, but the extreme right wing legacy lives on.

Her own great victory, of sorts, was in almost single-handedly preventing the ERA from being passed. At the deadline for ratification, it was a few states short of the number needed.

The amendment, in one sentence, stated that “Equality of rights under the law shall not be denied or abridged by the United States or by any state on account of sex.”

Schlafly fought it because, the Washington Post reported, “she believed it would open the door to gay marriage, abortion, the military draft for women, co-ed bathrooms and the end of labor laws that barred women from dangerous workplaces.”

She added: “Equality would be a step down for most women who are ‘extremely well-treated’ by society and laws.”

Her anti-ERA activist organization, the Eagle Forum, went on to “support causes such as opposition to illegal immigrants, federal judicial activism, ballots in languages other than English, the Title IX rules that required equal treatment of girls and boys in sports, and “privacy-invading questions” on the census,” noted the Washington Post.

She once said that secretaries, stewardesses and other women fighting for wages of comparable worth were simply “envious” of the wages paid to janitors and truck drivers.

Her positions earned the wrath of feminists including Betty Friedan who, during a debate, said, “I’d like to burn you at the stake.”

Even President Ronald Reagan was not conservative enough for Schlafly.

When his surgeon general, C. Everett Koop, tried to introduce AIDS education in public schools in the 1980s, Schlafly likened it to “the teaching of safe sodomy.” She called sex education “a principal cause of teenage pregnancy.”

Even as she aged, she never mellowed or altered her views.

Six months ago, she endorsed Trump for president, saying he had “the courage and the energy” to do “what the grass-roots want him to do.”

In a 2006 interview with the New York Times, “she attributed the improvement in women’s lives in the 20th century not to feminism but to labour-saving devices like the indoor clothes dryer and paper diapers.

While her persistence and activism earned some grudging admiration, being on the wrong side of progress in human rights and equality has won her few friends, and many enemies outside the ultra-conservative niche.

She will not be remembered kindly.

“I am unable to recall a public figure of the last century as smug, self-righteous, and reliably wrongheaded as Mrs. Schlafly,” wrote one reader, commenting on her obituary in the New York Times.

“With all due respect, it is hard to imagine another person in our time who has done more damage for women’s rights. And I’m sure she was very proud of that,” wrote another.

“She was a traitor to all of us women who worked and marched for equal rights for blacks and for gays and for ourselves.”

Yes, it’s safe to say that Phyllis Schlafly will not be remembered kindly.