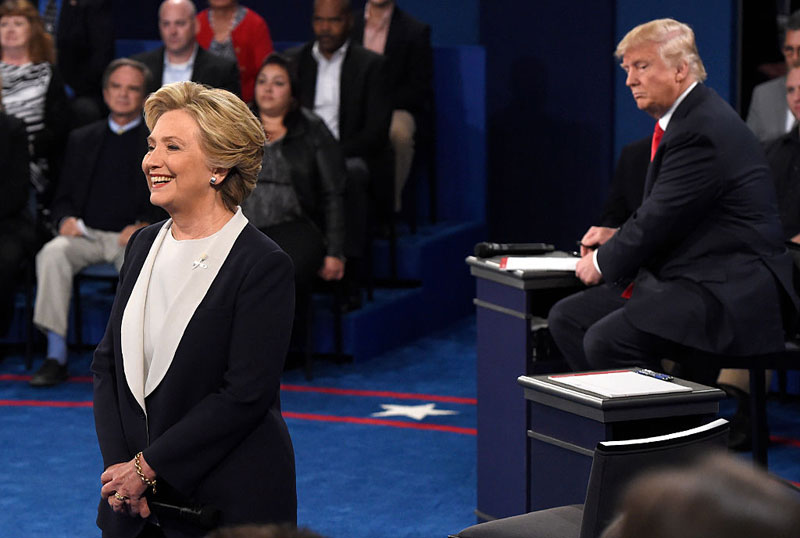 Yes, Donald Trump went there. But is it really surprising?

It’s no surprise that at the second U.S. presidential debate Sunday night Donald Trump stalked, threatened, bullied and lied about Hillary Clinton, even insisting she was akin to the devil (“she has hate in her heart”) and declaring (like the dictator wannabe that he is) that she’ll be jailed if he’s elected.

Here was a woman he couldn’t seduce and wouldn’t want to. Hillary Clinton is exactly the kind of woman Donald Trump wishes were non-existent: mature, powerful, knowledgeable, not Miss Universe material, not hot.

That this woman who should be invisible and irrelevant in Trumpland nevertheless stands up to him and is set to bring him down—to make Donald Trump a big loser!—is more than this ridiculous excuse for a man can bear.

Because it’s Trump’s deluded fantasy that he is irresistible to women, a man so charming, desirable and potent that women “will let me do anything.”

He’s bragged about being able to kiss and grope women in a 2005 video It doesn’t matter if they are married (Nancy O’Dell, subject of the video), or the teenage daughter of his friends (Paris Hilton at age 14), or his own daughter (famously saying he might date her, if she wasn’t, you know, his daughter).

If he is attracted, they are fair game. As the owner of the Miss Universe pageant, Trump literally dealt in beautiful women.

They were his stock in trade. He is a wealthy powerful man, a star, as he himself points out in the video, and he is entitled to take what he wants. Everyone knows that’s how it works. Including the women themselves.

But here’s the real problem:
Donald Trump’s fantasy of being irresistible to women extends to American voters.

His fantasy of being irresistible and entitled extends to the presidency.

In the New York Times Magazine this week, Susan Dominus writes about his attitude toward attractive women: “His thinking is ingenious in how hard it works to justify itself, how it flatters Trump: Take first, then claim they let you; explain it all with an inflated notion of your desirability and celebrity. Hovering underneath all that supposed desire is contempt: These women are so stupid, they’ll let me do anything.”

Replace “women” with “voters” and it still works. Remember “How stupid are the people of Iowa?” “I love the poorly educated”? “I could shoot someone on 5th Avenue and not lose supporters.” It seems so long ago. And so innocent.

Trump’s fantasy is that the country needs him and secretly desires him. He can do anything he wants. Don’t all women ultimately find him irresistible? Doesn’t the country? Voters should just give in and allow themselves to be Trumped.

Up until this weekend, it truly seemed possible that on Nov. 8 Trump could bed his biggest conquest yet. That he could actually take the American presidency because he could convince enough of the nation that he’s a star, a celebrity, a masculine powerhouse. It was coming to him, just like everything else in his life had.

He just had to reach out and grope it.

A grandmother with pneumonia was no match for the clear strength and virility of Trump. And plenty of voters were buying it.
Trump’s flirtation with the presidency was perhaps never meant to become a long-term relationship. But he couldn’t stop ogling it, and it became more and more desirable.

To Trump, winning the presidency is like seducing the most beautiful woman he has ever seen. He must have it, even if he would not know what to do with it if he got it.

The actual job of president for Trump would be like the Miss Universe who gained 60 pounds, “a real problem.” It’s the chase that matters, and the trophy. But he doesn’t need the headache. He already has a full-time job; this would just be an extra-marital affair. Which is why when John Kasich was originally offered the role of vice president, Trump’s son told him that Trump’s vice president “would be in charge of foreign and domestic policy.” Trump has no interest in marrying or living with the presidency, he just wants to prove he can, er, “seduce” the nation.

Instead of just feeling like he is the most powerful man in the world, it would actually be acknowledged! He thinks he can achieve this with voters mostly by charm, by simply declaring his greatness, and flashing his wealth and celebrity like he has always done with young women, models, and actresses.

But behind it are the darker instincts, the ones that hint of threats or assault if he doesn’t get his way. What he can’t take by charm, he’ll try for by force. Who knows what kind of instability is on the horizon if he loses, with the NRA behind him and Russia flexing its muscles?

At this rate, he’s going to need a whole candy factory’s worth of Tic Tacs to convince voters to pucker up.