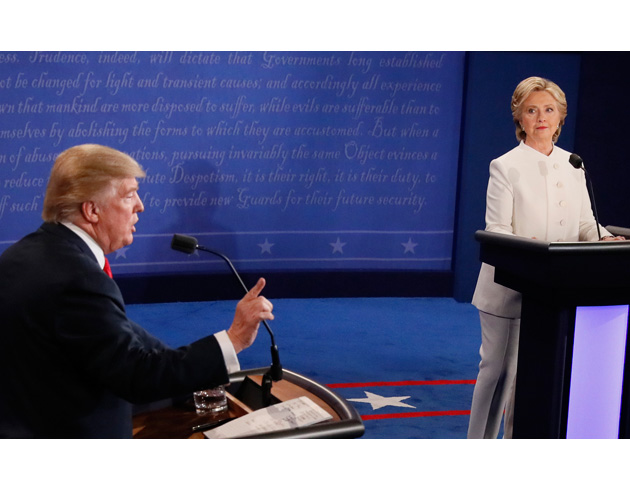 What’s disturbing—but useful—about what’s happening in America is that how women are treated is coming to the forefront of the national conversation.

Watching the third and final U.S. presidential debate Wednesday night on a split screen was a mirror of what is happening in the country.

It was also like watching a reality show on one side of the screen (“I will keep you in suspense,” said Trump about whether he’d accept the election results). There was also a touch of TV western when he mentioned “bad hombres.”

And on the other side of the screen was an experienced politician laying out plans for a progressive, liberal society.

Trump lost this one “bigly” (or is he saying “big league”?).

Besides losing it every time Clinton chided him and taunted him, he shocked the world by refusing to confirm that he would accept the results of the election.

His followers are already primed to distrust and revile Clinton and to question her right to lead the country—just as they questioned Barack Obama’s birth as an American, san ugly, racist issue pumped up by Trump.

“She shouldn’t be allowed to run,” he said.

“Send the bitch to jail,” clamour his supporters.

Somehow, Americans enamoured of Trump don’t seem to care too much about his own qualifications.

One of the biggest worries about Trump, even if you agree with his ultra right-wing vision for the country—he’d make sure his Supreme Court appointees would be judges who would overturn Roe vs. Wade, the decision allowing abortions—is his skewed view of international relations.

He’s perfectly willing to pander to Vladimir Putin, ripping apart NATO and insisting, over and over again, that he’d “get along” with the Russian strongman. He doesn’t even realize how subservient, even submissive, that sounds.

Meanwhile, all the hype about how Wikileaks would severely damage Clinton late in the campaign was, it turns out, just hype. Wkilileaks revealed nothing more damaging than typical campaign chatter and strategizing.

What’s both disturbing but useful about what’s happening in America is that how women are treated is coming to the forefront of the national conversation.

At the final debate, again, it’s been noted, Trump kept interrupting Clinton, trying to override her comments with his louder, deeper voice while she had to balance her voice carefully to avoid being called shrill and angry.

Moderator Chris Wallace, like previous moderators, allowed Trump to keep talking past his limit and to respond but Wallace kept cutting off Clinton so he could move on to the next question.

And soon after the debate, one pundit declared that Clinton’s smile (she wisely smiled at Trump’s more ridiculous statements) was “mirthless” while another described it as “smug.”

What did they expect? A joyful, delighted, happy smile at finding herself sharing the stage with a juvenile huckster?

Many Americans are now worried about what will happen on November 9, the day after the election.

They’re worried that, with the NRA ermpowered by Trump’s support, with his followers stoked with the Hillary hatred he has fanned, and with his hint of rejecting her election, there could be riots or even an assassination attempt.

The best case scenario is the observation one commenter made shortly after the debate: “On November 9th, Trump will be in denial for the rest of his life.”