13 Thoughts On The Improbable Election Of Donald Trump 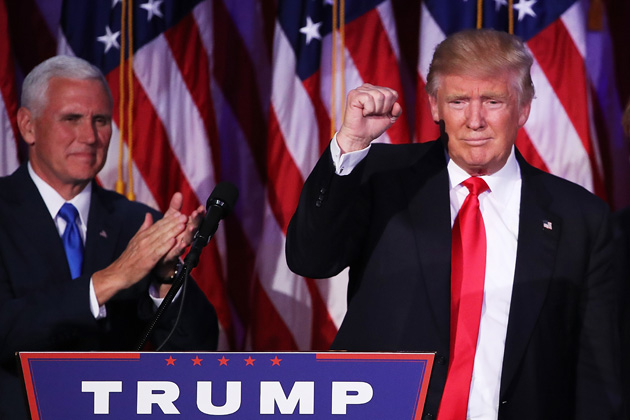 In honour of the the original 13 states, Judy Gerstel shares 13 thoughts on the unlikely election of Donald Trump as the President of the United States.

13. For Canada, President Donald Trump may be both good and bad. He’s in favour of the pipeline but wants to dismantle NAFTA. Global uncertainty about President Trump and distrust about his ability to lead the country will likely sink the American dollar and hike the price of gold.

12. People in America, as in many other countries, are afraid and insecure and they’re closing the gates, building walls, rejecting globalism and turning to the extreme right.

11. Melania Trump, nude model and third wife, is going to be the first lady of the United States. Ironically, she will also be the first immigrant to occupy the White House.

10. Americans panicked at the changing demographics of the country and the threat to white male supremacy to the extent that they were willing to overlook all the reasons why Trump was not fit to be president.

9. Trump and Republicans won by demonizing Clinton, something they’ve been doing for the last 15 years. They put the pushy woman in her place—which was not going to be the White House, no matter what. He told Americans that if they elected Clinton she’d bring millions of refugees into the country in the first week of her presidency. It was just one of his many lies but he managed to make enough Americans believe that she was the liar.

7. The rest of the world (except Russia which is no doubt celebrating its effectiveness in interfering in the election) is worried. World stock markets and economists are worried. They’re predicting a global economic recession.

6. American kids are scared. At my granddaughter’s school in Massachusetts, the kids are worried that Trump is going to start a war. I despair for my granddaughters’ having to offer Trump the respect they ought to have for their president.

4. One pundit spoke about the “moral numbness” in America. They’ve elected a sleazy man who cheated on his wife, cheated suppliers, groped women, insulted minorities, mocked the disabled, joked about the size of his penis and—need I go on?

3. Married men voted overwhelmingly for Trump (think about why) while single men, single women and married women voted for Clinton, but with a much lesser margin. Millennials and minorities held back. People who didn’t vote because they didn’t like either candidate or who voted for a third party are largely to blame for this. They screwed up and now America is screwed.

2. Yes, the pollsters got it wrong. But so did the American people. They got the wrong ending to the story. The smug misogynistic racist bully isn’t supposed to win. How did this nightmare happen?

1. This was the second American Revolution, 240 years after the first one.