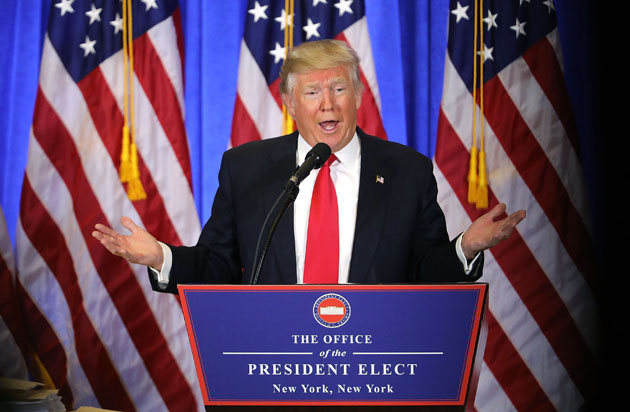 Forget schadenfreude: Canadians are enjoying the feeling of Trumpenfreude in the days leading up to the inauguration.

Schadenfreude is the feeling of enjoyment that comes from seeing or hearing about the troubles of others.

Trumpenfreude is the feeling of enjoyment that comes from living in Canada and seeing and hearing about the troubles of Americans, leading up to the inauguration on Friday.

Even worse are Trump’s actions and threats: the insanely inappropriate appointments meant to dismantle important government agencies, the repeal of Obamacare with no replacement, the abandonment of ethics in benefiting financially from the presidency, the immoral, mysoginistic behaviour; and the attacks on respected American institutions and icons like the CIA and venerable civil rights activist John Lewis.

But, let’s be honest, aren’t we enjoying this, just a little, teeny tiny bit?

We Canadians have always had this love-hate relationship with our next-door neighbour. We flock to Florida, heart New York and shop Buffalo—but we’ve also historically resented the grandiosity and self-congratulatory attitude of the U.S. of A., as well as the wealth and success behind it.

So it’s no wonder that some of us are feeling, well, a little smug right now about what the self-styled “greatest country on earth” has done to itself.

I am still mourning Hillary Clinton’s loss, but at one point leading up to the election, I did say that, in a way, I hoped Trump would be elected because it would serve Americans right—as in, be careful what you wish for.

The U.S. is in total disarray at this moment and for four years more years or until impeachment, whichever comes first. Pundits are predicting the latter, and sooner.

Watching what Trump is doing to America right now is like watching one of those slo-mo nature documentaries on the Discovery network where the cunning predator stalks and snares the vulnerable prey and proceeds to rip it apart.

And here we are, safe and sound north of the 49th parallel, unarmed, enjoying universal health care, relishing diversity, opening our borders to refugees, maybe just a tad disappointed in our young leader’s propensity for cash for access, but without fear about our nation’s future (though we may be a little worried about the world’s future after Trump takes over).

So, yes. We should feel smug about being Canadian and not being American these days.

And no, we shouldn’t feel bad about our Trumpenfreude.