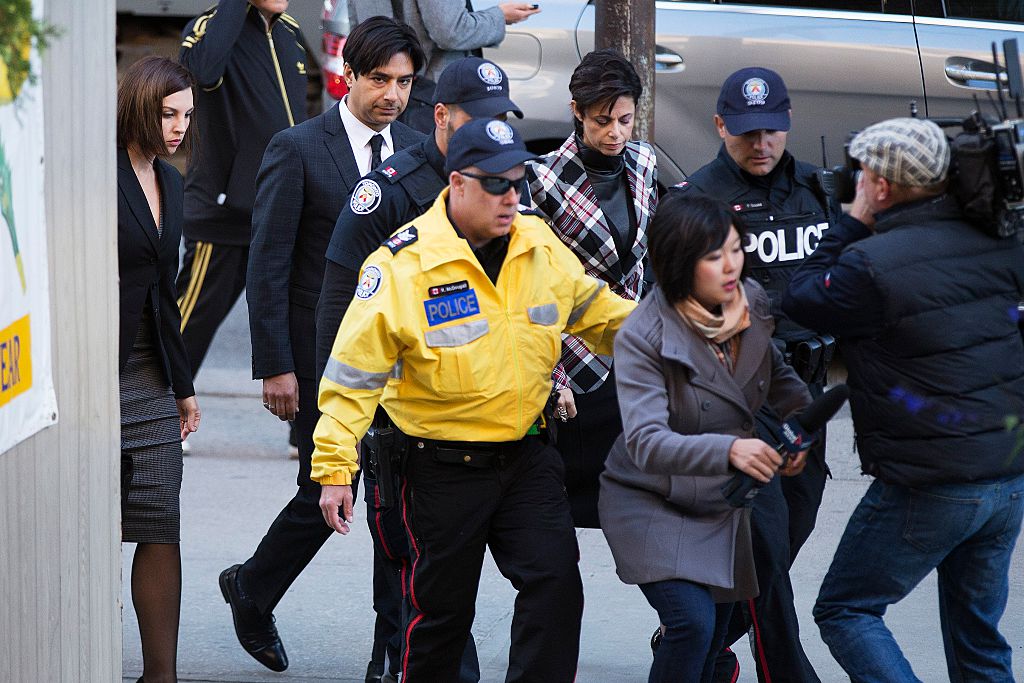 March 8 marks International Women’s Day, and we’ve come a long way, baby – or have we? Here, a look at modern misogyny …

When I was hired as a columnist in the late ’90s, the message on my answering machine. “You’ve got the job,” said my new boss, “even though you didn’t put out.”

The newspaper’s offices were out in the sticks, so we had met at a downtown restaurant for a drink and interview the evening before. I’d pitched him on why I was ideal for the position; he’d agreed. Then he got drunk and wrapped things up by attempting to paw me in a taxi. I gamely fended him off until I was able to leap out at my address, deploying the nuanced rebuff with which women in this situation are all too familiar – the one where your disinterest is conveyed but in a jovial manner that won’t offend the man who’s offending you. After all, you do want the job. It’s a memory, and one that seems sepia-quaint by today’s standards, that came back to me last year as the Jian Ghomeshi scandal detonated. Of all the sordid details, what struck me most was an anecdote by former Q producer Kathryn Borel who’d been openly groped, massaged and dry humped by Ghomeshi, who had also relayed during a workplace meeting in the company offices that he’d like to “hate f***” her. Reporting his lewdness to CBC higher-ups, Borel was advised to “figure out how to cope with” her boss, who “was the way he was.” In other words: quit or deal with it.

As another woman told the media in the wake of the Ghomeshi tsunami, things over on Parliament Hill weren’t much better. A 22-year-old intern at the time, Jasmine Ali was fired from the office of a Liberal MP in 2007 after objecting to the conduct of her supervisor. “Parliament is not a place for women,” he’d announced on her second day at work, pointing to his erection, while defining the capital as “a men’s locker room where it’s all about whose thing is bigger.” During her second week, he informed her, “Women can’t sue for sexual harassment on the Hill. It’s the one place exempt.” She rejected his advances; he sabotaged her efforts to impress their boss, took credit for her work and made her wash his dishes. The treatment would cease, he noted, if she agreed to date him.

Jerks on the loose in their private lives? I’m old enough not to be surprised. That women in the 21st century – navigating office hard-ons and “hate f***” asides – are told they are responsible for a male colleague’s arrant sexual entitlement stuns me.

Raised by a Ms. Magazine subscriber in the most liberal of Canadian milieus, I thought we were over this garbage by the ’90s. Or, assuming men now “knew better” that, at the very least, we’d moved passed its more boorish articulations. Instead, decades after women fought for equal rights at work, we’re circling back. We may now have legislation on our side, but a familiar dynamic, only more vulgar, has insinuated itself. It’s helped along, as usual, in that women don’t want to be “difficult,” branded the office harridan or impede their professional advancement by making a “fuss.” Coddled by this convenient silence, (some) men feel free to behave badly. There’s nothing new in this stale equation, the question is: what’s at the root of this prickly brand of post-modern misogyny?

Discussing the recent, well-documented wave of Flintstone gender politics with friends, one demurred with, “I think if you asked a secretary from the ’60s, she’d say it was worse then.” Most pointed to social media. “It’s the CNN effect,” offered a university professor. “Things aren’t worse – they just seem worse because we hear about everything now.”

Actually, there’s a lot of “everything now”: it’s been a banner time for misogyny. From the litany of domestic abuse by NFL players and the 2014 California Elliot Rodger massacre, through Gamergate, which exposed online anti-woman harassment in the video game culture and the flood of campus rapes, there seems to be an entrenched acceptance of the behaviour despite some attempts to punish the perpetrators. In 2014, though suspended from the NFL and dropped by his team, men dressed up as Raven’s linebacker wife-beater Ray Rice for Halloween, proudly issuing Instagram posts (#hitabitch, #illtaketheelevator). Across America, hundreds of high schools invited “motivational speaker” Justin Lookadoo – whose maxims include “dateable girls know how to shut up” – to address their students.

In Canada, undergraduates in Dalhousie’s dentistry program formed a “gentlemen’s” Facebook forum in which to banter about chloroforming women, compare classmates they’d like to have “hate sex” with (that again…) and share images of a scantily clad female with the tag line: “Bang until stress is relieved or unconscious.” A stance with which a shameless Bill Cosby – hitting 50 on the alleged Quaalude-induced rape charts – could only concur? Professor Françoise Baylis, one of just four Dalhousie faculty members who filed a formal complaint demanding suspensions, told CTV News, “We’re at a very unique cultural moment [where we’re] able to name the problem publicly – to call this misogyny.”

Last May, CityNews on-air correspondent Shauna Hunt was treated to the sport’s world’s fun new lark: men screaming “F*** her right in the p****!” as a female reporter broadcasts live from a game – an affront so popular that it enjoys its own meme: #FHRITP. Covering the Toronto FC’s opening soccer match while a man shouted the vulgar epithet at her, Hunt turned the camera to confront him, coolly inquiring how his “mother would feel if she saw him talking like that.”

A civil servant, Simoes was summarily fired from his job at Hydro One – before the government-owned utilities corporationwas forced to reinstate him to his $100,000-plus post after he took his case to arbitration. A verdict his female coworkers could only have been thrilled with – another victory for the doucheoisie.

Swap “woman” for “black person” in any of the above incidents, and we’d call it a hate crime. While terms like “toxic masculinity” aren’t often bandied about outside of Women Studies programs, let’s connect our culture’s blasé acceptance of a sexually malevolent status quo to a wider context of increasingly normalized misogyny – and the probability that “hate f***” makes it into Webster’s this year.

One might look to Marc Lépine, who massacred 14 women at Montreal’s École Polytechnique in 1989 while shrieking “I hate feminists!” to make the case that lady-hating lunatics are nothing new. But that was a different era and set of circumstances. Lépine was born Gamil Gharbi to a first-generation Algerian immigrant who – lugging some Old-World baggage that included noxious views about women – beat his wife while insisting she exhibit no affection toward their son, whom he also abused, before abandoning both when the boy was seven.

In the mid-century, we had male chauvinism (“the belief that men are superior to women”) with all the glass ceiling pats on the ass and maddening paternalism that came with it. Now we have Postmodern Misogyny (“the hatred of women”), a spikier class of assumed supremacy embraced by the sort of men who, maladapting in an era of gender parity, react poorly to the “pressure.” They then recoil into Internet-enriched delusions, incapable of assessing their own conduct.

In 2014, “dating coach” Julien Blanc caused a media maelstrom when an online video appeared of him in Japan, encouraging men to grab random women by the neck and shove their faces into their groins. “In Tokyo,” schooled Blanc, “if you’re a white male, you can do whatever you want.” Blanc is a disciple of Real Social Dynamics (RSD), cofounded by Canadian Owen Cook, whose company runs $2,000 three-day boot camps on how to pick up women. Tips include dealing with females who are “not in the mood” (“throw her on the bed”). The RSD corps also includes California-based executive coach, Jeff Allen, who tools around San Francisco in his vibrantly painted self-proclaimed “rape van.” This is a multi-million dollar a year business.

Employing the same backward logic as “white rights” factions, the central forum for “male empowerment” is the site A Voice for Men, a website flagged as a ‘hate site’ by Norton Symantec’s virus software in 2013. The site hawks Feminists Are Stupid T-shirts and Femi-Nazi posters that co-opt Third Reich imagery. Advancing from whining online to hosting public symposiums, the organization held its first conference in 2014 to dismiss rape and place blame for domestic assault on women.

In October, its leader Paul Elam crafted a website full of disinformation that mimicked the look and URL of the White Ribbon Campaign – the Canadian anti-domestic violence association. Discussing his copycat site, Elam told Cosmopolitan magazine that domestic violence shouldn’t be presented as something that “men can control only, that men need to stop.” Not that his troubling views precluded Elam – author of such blog posts as “When is it okay to punch your wife?” from being invited to speak about domestic violence at Toronto’s Ryerson University in June 2015.

In a political messaging triumph akin to Republican party in the United States convincing legions of poverty line voters that they don’t need health care, young women are now flying the anti-feminist flag, launching the Tumblr feed Women Against Feminism to swap such chestnuts as “I don’t need feminism because it’s hurting men,” “Feminism invented the war on women” and “I’m not a feminist because wearing a bra does not objectify me.” Oy.

Googling “feminists should” in 2014, a UN report found that search results included: die, be shot and “be killed. In September of that year, when actress Emma Watson gave a speech at the UN about the importance of global feminism, 4chan hackers threatened to post stolen nude photos of her online as payback. In November 2014, Time magazine offered up “feminist” in its annual reader-generated list of words that should be banished from the lexicon. Time subsequently apologized.

In our #WTF? info-age culture, the liberal women’s site Jezebel was forced to rebuke its own publisher. It ran a column titled “We Have a Rape Gif Problem and Gawker Media Won’t Do Anything About It” in reaction to the flood of sexually violent images uploaded by trolls infesting their site, thanks to an operating system that shelters anonymous, untraceable commenters. “Free speech absolutism is very costly speech,” media critic Soraya Chemaly remarked to the press while liaising with Facebook to combat the social network’s ongoing sexual harassment issues.

But what’s most disturbing about the warped new gender perspective is that it speaks primarily to a continually renewed audience of boys and young men, drunk on the Wild West Wi-Fi that is free of standard media ethics and that fosters misogynist pathology as it disseminates the message that women are mere objects. That women are there for male amusement, resentment and carnal fulfillment. These men are encouraged to laugh it off when they’ve crossed the line – or to have no idea where the line even is – as modern culture continues to purvey that vulgarity and violence toward women is permissible. This leads to an apathetic society offering a collective eye roll and a few platitudes about freedom of speech while boys grow up free to Google “slut blows horse,” before being expected to greet women in the workplace as individuals worthy of respect.

That’s why your daughter’s or granddaughter’s boss wants to “hate f***” her.

It’s enough to make you pine for an old-fashioned pat on the ass.