Women’s March An All-Out Rebellion Against What Trump Represents 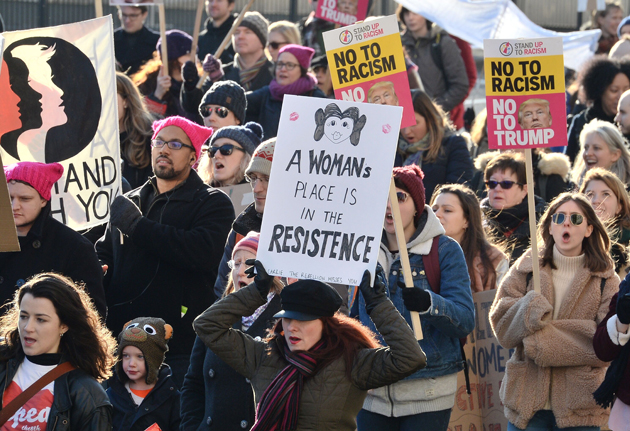 A friend who was at Berkeley in the ’60s was excited about taking part in the Women’s March at Queen’s Park in Toronto, one of more than 100 which took place on January 21 in cities across Canada and the world.

The mother of all these marches, of course, took place, in Washington, D.C.

It was my friend’s first protest march in almost 50 years and she was eager to get out there again with like-minded people and brandish placards and chant anti-administration and anti-Trump slogans.

Her preferred chant for the march, courtesy of singer Fiona Apple: “We don’t want your tiny hands anywhere near our underpants.”

A past chant that was popular when she marched all those years ago, during the war in Vietnam: “Hey, hey, LBJ, how many kids did you kill today?”

If you missed the ’60s the first time, you’re in luck.

An American government that wants to turn back the clock and repeal much of the progress that began with the ’60s is making it possible (some say necessary) to experience the anti-government, anti-establishment demonstrations all over again.

Trump’s inaugural address, like his policies, instead of healing the nation’s divisiveness, promoted the polarities.

At the inauguration on January 20, 95 people were arrested for smashing windows, throwing bricks, setting tires on fire and clashing with police who responded with tear gas and pepper spray. We can expect the protests to continue and even turn into riots as the country is transformed.

Although the original point of the recent Women’s March was to protest how aging men are trying to exert control over women’s bodies, it’s become an all-out rebellion against what the Trump administration represents.

Sure, there are problems with identity politics in the ranks of the protestors. No protest movement is without its internal issues.

But it’s fair to say that everyone who took part in the Women’s March in January —and for the next four years—is somewhere between concerned and devastated about what is happening now and for the future in America and the world.

Here in Canada, many ex-pat Americans, like my friend, marched to protest the new government of their native land.

Others have family in the U.S. and are worried that a Trump administration will disrupt their lives, affect their health care and the education of the children.

Some Canadians are fearful that the causes they uphold, whether it’s protecting the environment or upholding LGBTQ rights, may be rolled back in our neighbouring country, a nation that has so much influence in the world.

And although, as Canadians, we’re feeling somewhat protected (and just a little smug), we recognize that we belong to a great big interconnected world that’s less secure and more volatile—for women, for nations, for everyone—now that Trump, with all his recklessness and pettiness, is in charge of America.

People who are marching, in Canada and everywhere, are taking steps to show their concern and, they hope, to bring about change.