Guess Her Age: The Next French Leader’s Older Wife 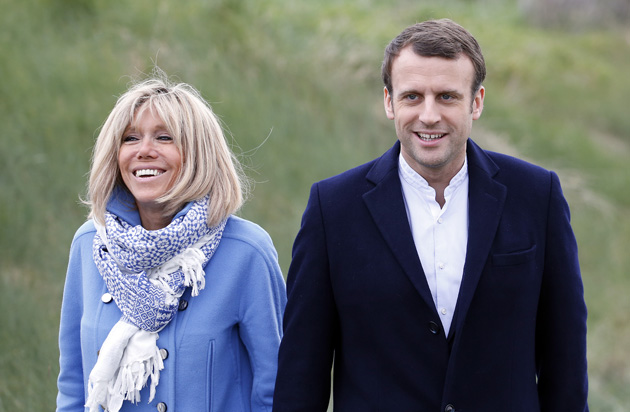 When it comes to comments about the age gap between French presidential hopeful Emmanuel Macron and his wife, Brigitte, it becomes clear that ageism and sexism are alive and kicking.

If I could vote in the upcoming French election, I’d vote for Emmanuel Macron. I’d vote for him not because he’s a centrist, which is a good enough reason, considering his opponent is the crazy, racist right wing nut Marine LePen. No, I’d vote for Macron because he’s happily married to a woman who’s 25 years older than he is.

That age difference between 39-year-old Macron, the current front-runner for French president, and his beautiful 64-year-old wife Brigitte, is no big deal in la belle France.

The French are famous for their easygoing, live-and-let-live attitudes to l’amour.

That acceptance of anything goes may be one of the reasons why former Canadian Prime Minister Kim Campbell, 70, and her third husband Hershey Felder, 48, have made their home in Paris. They’re celebrating their 20th anniversary this year.

Certainly the French have had greater scandals to digest than a much older wife. After all, mistresses are de rigueur for French presidents.

“The monogamous relationship between Mr. Macron and a wife 25 years his senior might seem staid by the standards of some unfaithful French presidents,” noted London’s Independent newspaper.

Outside of France, there’s great interest in the 10-year marriage of Monsieur and Madame Macron and the fact that they met when he was 15 and she was his married teacher at a private Jesuit school. Her daughter was in his class.

Teacher and former student kept in touch while he went to Paris to study but the commitment was firm.

Last year, Brigitte told Paris Match, “At 17, Emmanuel told me ‘Whatever you do, I will marry you’!”

Maybe it’s that back story that makes the Macrons so fascinating to people around the world. Likely, it’s just the reversal of roles that’s caught their attention.

The 22-year age difference between 70-year-old Donald Trump and his 47-year-old wife Melanie is almost the same as that between the Macrons and, yet, it’s hardly remarked upon.

That’s because it’s considered normal for an aging, wealthy, powerful man to have a glamorous wife several decades younger. It’s taken for granted that men value youthfulness in a mate and find older women unattractive.

And in relationships where the woman is older—even a few years older, let alone a few decades—the tabloids can’t resist referring to her younger partner as a “boy toy.”

Have you ever heard Melania or any much-younger wife referred to as “girl toy”? (OK, I’ll admit that “toy”and “girl” don’t rhyme but still…)

The Guardian newspaper got it right by stating, “The reaction to the age disparity between the French presidential hopeful and his wife proves one thing: endemic ageism and sexism are alive and kicking.”

I especially liked what Guardian writer Zoe Williams said about the the situation: “You have to rejoice in Macron kicking against the really pernicious and widespread view that a woman’s attractiveness is pegged directly to how close she is to 18.”

I can’t cast a vote for Macron as President of France, but I’m still voting yes for him as a mensch and hoping that Brigitte gets to celebrate her 65th birthday in the Élysée Palace as wife of the youngest French president ever.