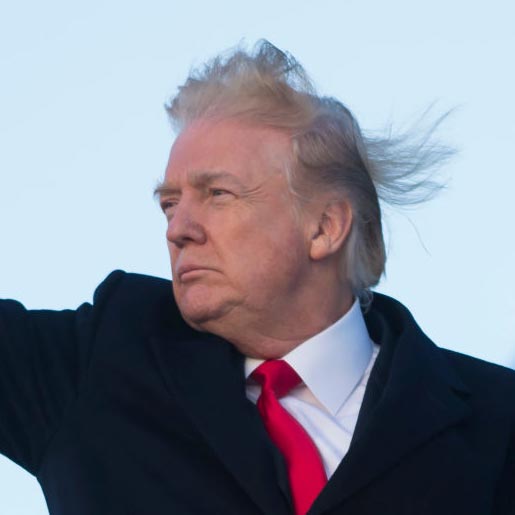 US President Donald Trump waves from Air Force One prior to departure from Joint Base Andrews in Maryland, Feb. 2, 2018. Photo: Saul Loeb/Getty Images.

Probably the sharpest assessment of Donald Trump – variations of which have come from standup comics and director Jon Favreau – is that he is “like an internet comments section that decided to run for President.”

You run into a Trump almost every day on social media, a run-amok id who plays by schoolyard rules of name-calling and is never happier than when he knows an insult has stuck. You think you’re having a conversation, and suddenly, you’re called a “moran” and a “looser” (their misspellings are so consistent, it’s as if they get together and decide how to misspell).

If you continue to engage, they will Google you. If they see a picture, particularly if you’re a woman, they will focus on your looks.

Save for the perverse few who enjoy fighting trolls, most sane people bail/block/click “ignore” and leave the child to the schoolyard. The first insult is the end of the argument.

You don’t return fire. To ignore them is to deprive them of oxygen.

To say that “Twitter President” Trump has lowered public discourse is like saying California has had a few brush fires lately. He has petulantly rattled the cage of a nuclear power, calling North Korean leader Kim Jong-un “short and fat” (in retaliation for Kim calling him “old”). He has called both Arianna Huffington and New York Times columnist Gail Collins “dogs.” He refers to the hosts of MSNBC’s Morning Joe as, “Low IQ Crazy Mika and Psycho Joe.”

And for some reason, he loves attaching “Little” to the names of his opponents – including Marco Rubio, Kim Jong-un, Congressman Adam Schiff and Senator Bob Corker (who got a kindergarten change-up, as “Liddle Bob Corker”).

But in his own perverse way, @realdonaldtrump may have been logical when he once tweeted about another public foe Bette Midler “, [email protected] talks about my hair but I’m not allowed to talk about her ugly face or body — so I won’t. Is this a double standard?”

Trump’s hair was indeed in the news this week, when the Huffington Post released a video of his hair blowing in the wind as he ascended the steps to Air Force One. It apparently revealed a major bald spot and a comb-over that seemed a marvel of engineering that fell apart structurally.

When I say it was in the news, I mean it was everywhere – Time magazine, New York magazine, the Guardian, the Daily Mail.

If it got that much mainstream media coverage, you can only imagine the schadenfreude it generated on Twitter and Facebook. (It has 85,000 views on YouTube alone).

In the past, Netizens have retweeted unflattering pictures of Trump’s girth in stretchy golf pants and have doctored a photo of those same white pants to make it look like he’d become incontinent in them (a photo that was accepted, retweeted and shared as real my many). They had a field day with the results of his medical exam, and revelations that his diet is primarily McDonald’s and KFC-based.

None of which has anything to do with the job he’s doing as President. As a parent, you quickly learn to criticize actions. It’s fair to mock Trump for taking credit for the stock market rise but not taking the blame for its fall. It’s fair to criticize his decision to hold a military parade in his… excuse me, the MILITARY’S honour, because it’s inappropriate on many levels (including the sorry state of care for veterans with PTSD). It’s fair to call his treatment of immigrants unfair and to accuse him of ignoring the plight of American citizens in Puerto Rico.

It’s also fair to accuse him of failing to live up to the standard of civil behavior we expect from the ostensible leader of the Free World. (But good luck with that).

But to fight Trump in his own octagon, to truck in personal insults, even to succeed in humiliating him, is like beating up someone to teach them that violence is unacceptable. His penis size, his weight, speculation about his son, the state of his marriage, they are at best distractions from things we should actually be talking about. At worst, they are an indication that whatever is in his soul is contagious.

When it comes to going low, Trump is rubber, you are glue. There is also the old adage, “Never wrestle with a pig. You both get dirty, and the pig likes it.”

But let’s not forget it was the much-maligned mainstream media that kick-started Combover-Gate, and they did nothing to acquit themselves this week. When the biggest story of the week is “71-year-old man is bald!” it may be time to give your head a shake, turn off your smart-phone and go look for real news.

For better or worse, Trump may even make that news, in the window of opportunity when he’s off Twitter. In the meantime, though the temptation can be overwhelming, we’d all be better off leaving the low blows and insults to the Insulter-in-Chief.