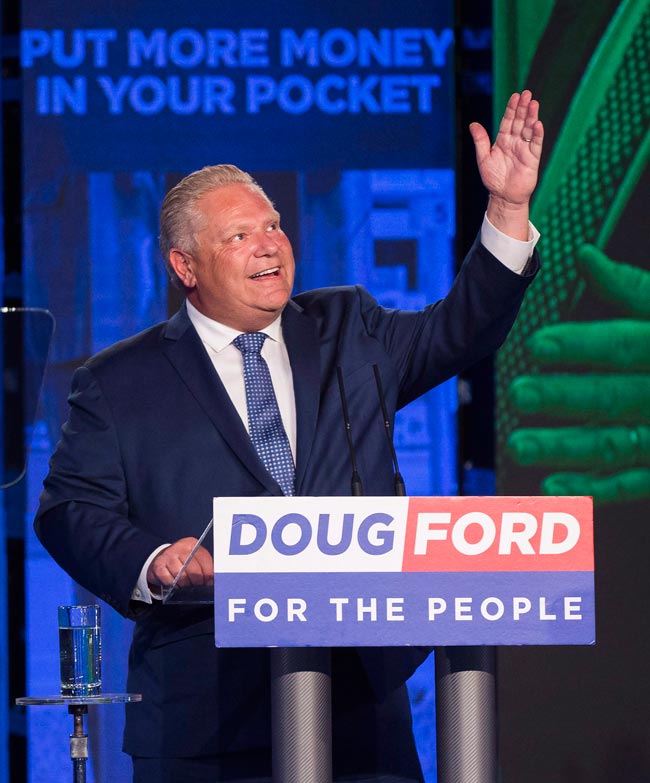 After 15 years of Liberal majority governments, Ontarians voiced their desire for change — and did so in resounding fashion.

On June 7, voters handed Doug Ford and the Progressive Conservatives an overwhelming majority of 76 seats (40 per cent of the popular vote) and completely abandoned Kathleen Wynne’s Liberals, reducing the long-serving government to a paltry seven seats.

And while Andrea Horwath’s NDP made strong gains — more than doubling their seat count from the previous election (18 – 40) and forming the official opposition — there’s a sense of missed opportunity among supporters, disappointed that the party couldn’t do more to stop the PC majority.

“We have taken back Ontario,” Ford said in his victory speech in downtown Toronto. “Tonight we have sent a clear message to the world: Ontario is open for business.”

What Ford’s campaign lacked in detail it more than made up for with simple messaging that voters could understand: cut taxes, reduce hydro rates and end wasteful spending. Basically, it was a repudiation of everything Wynne’s party stood. And, in the end, the message resonated with voters — and left the Liberals with not enough seats to form an official party.

While the NDP tried to position itself as the government that cares for its people, Ontarians clearly didn’t trust them to run provincial finances in these challenging economic times. Their path to victory rested on stealing enough Liberal voters outside of Toronto. It didn’t happen and early on it became clear that the NDP’s second-place fate was sealed.

The fact that the grinning Ford even made it to the victory podium marks the final surprise to one of the strangest provincial elections in in recent memory.

Because the newly crowned leader was supposed to be from PC leader Patrick Brown. And Ford was planning to run for mayor of Toronto in the next election.

However, in January, Brown was unceremoniously turfed from his leadership role after allegations of sexual impropriety surfaced. A hastily convened leadership contest saw Ford barely eke out a victory over Christine Elliot, giving the new leader only two months to cement his new role and roll out an effective campaign.

Then came Kathleen Wynne’s sudden surrender announcement just a week before the election. Knowing she couldn’t win, her unexpected concession left Liberal candidates and supporters confused and wondering where to direct their vote. Add in the usual Ford chaos of secret audio tapes improper nominations  and a nasty family squabble gone public and no one had and anything from an NDP majority to a Conservative minority was on the table.

Here’s how the mainstream press is reacting to Ford’s victory:

Globe and Mail: “Hold on to your hats, Ontario: Expect a wild ride under Doug Ford”

Toronto Star: “Ontario has given Doug Ford carte blanche to do virtually anything he wants”