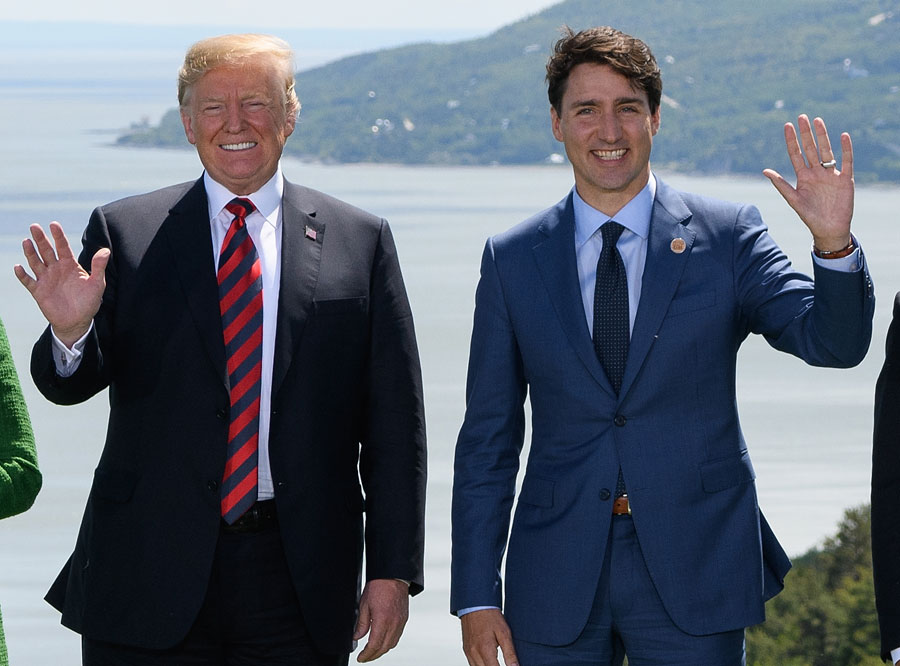 A tense G7 Summit concluded this weekend in Charlevoix, Quebec with gathered leaders putting their differences aside, renewing their commitment to “free, fair and mutually beneficial trade and investment” and resolving to “reduce tariff barriers, non-tariff barriers and subsidies.”

Everything seemed so rosy.

What followed was an outburst of diplomatic whining and raging, behaviour that’s commonly heard in a playground, not a gathering of the most powerful world leaders.

In his post-G7 media wrap-up, Trudeau adopted the pose of a smaller kid who stands up to the schoolyard bully. Saying the U.S. tariffs on steel and aluminum were “kind of insulting” and that Canada “will absolutely not be pushed around” by the U.S. trade tactics.

Viewing Trudeau’s press conference onboard Air Force One, Trump immediately went into a fit of apoplexy. And after rocketing off a volley of angry tweets attacking Trudeau, it became clear that whatever progress had been made at the G7 meetings was now history.

Here’s how the breakdown of the G7 commitments took place. Read the level of discourse and ask yourself whether they were made by respected world leaders or by children in a playground dispute.

“We acknowledge that free, fair and mutually beneficial trade and investment, while creating reciprocal benefits, are key engines for growth and job creation … We note the importance of bilateral, regional and plurilateral agreements being open, transparent, inclusive and WTO-consistent, and commit to working to ensure they complement the multilateral trade agreements. We commit to modernize the WTO to make it more fair as soon as possible. We strive to reduce tariff barriers, non-tariff barriers and subsidies.”

“The historic and important agreement we all reached at #G7Charlevoix will help make our economies stronger and people more prosperous, protect our democracies, safeguard our environment and protect women and girls’ rights around the world. That’s what matters.”

Trudeau’s not-so-feel-good comments that sent Trump into a rage:

“[Retaliating to U.S. steel tariffs] is something we absolutely will do because as Canadians we are polite and reasonable but we will absolutely not be pushed around. I will to that without flinching. That is what I explained to the president.” “He really kind of stabbed us in the back. [The  President] is not going to let a Canadian prime minister push him around. We were very close to making a deal with Canada on NAFTA, bilaterally perhaps, and then we leave and Trudeau pulls this sophomoric, political stunt for domestic consumption. Trudeau made an error. He should take it back.” — Larry Kudlow (Trump Trade Advisor) on CNN‘s State of the Union

“That’s what bad faith Justin Trudeau did with that stunt press conference. That’s what weak, dishonest Justin Trudeau did. There’s a special place in hell for any foreign leader that engages in bad faith diplomacy with President Donald J. Trump and then tries to stab him in the back on the way out the door. hat was one of the worst political miscalculations in Canadian history.” — Peter Navarro (U.S. trade official) on Fox News Sunday

“The Prime Minister said nothing he hasn’t said before — both in public, and in private conversations with the President.” — Trudeau spokesperson Ahmad Cameron

“Canada does not conduct its diplomacy through ad hominem attacks. We don’t think that that is a useful or productive way to do business. We are absolutely convinced, today more than ever, of the necessity of a clear, resolute, strong and firm Canadian response.” — Chrystia Freeland, Canadian Foreign Affairs Minister

“The situation isn’t very nice. I don’t think that ratcheting up the rhetoric is going to improve things.” — German Chancellor Angela Merkel