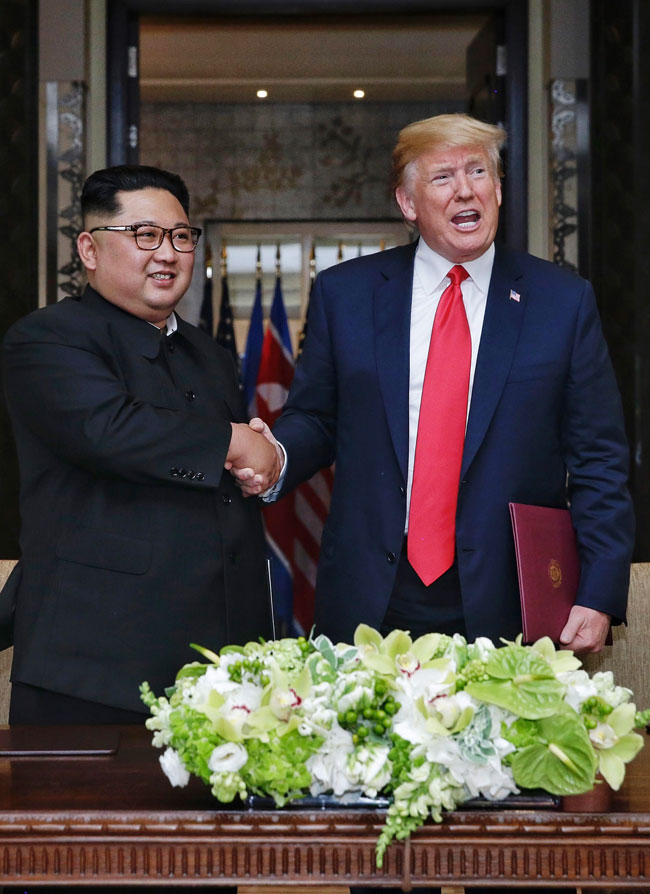 Donald Trump and Kim Jong Un concluded their historic meeting in Singapore on June 11 with an agreement to end hostilities that have isolated North Korea since 1953 and commit to “complete denuclearization” of the Korean Penninsula. And they may have hashed out a few condo deals on the side.

“We’re prepared to start a new history and ready to write a new chapter between our two nations,” Trump said.

“We had a historic meeting and decided to leave the past behind,” said Kim “the world will see a major change.” Kim Jong-un agreed.

While both leaders basked in the media spotlight gleefully shaking hands, they deflected questions on the lack of concrete details in the agreement. “We’re starting that process very quickly — very, very quickly — absolutely,” said the U.S. President.

The document does not go into specific detail on how “denuclearization” will take place, nor give a timeframe for the process. In a follow up interview with ABC anchor George Stephanopoulos, Trump vaguely assured everyone about Kim’s good intentions: “He’s de-nuking the whole place, and he’s going to start very quickly. I think he’s going to start now.”

After the summit, he added that the U.S. would end military exercises in South Korea, an assertion that caught everyone off guard, including the South Korean government and the U.S. military.

Moon Jae-in, South Korea’s President, issued a statement saying his government needed to “to find out the precise meaning or intentions” of Trump’s statement.

While any agreement that could end the brutal regime in North Korea is a positive step, Trump didn’t see this as the only goal of the meeting. Instead, he added his signature surreal touch by turning the whole thing into a real estate pitch.

“You could have the best hotels in the world right there,” Trump said. “Think of it from a real estate perspective. You have South Korea, you have China, and they own the land in the middle. How bad is that, right? It’s great.”

North Korea’s leader could be forgiven for if he felt slightly bewildered after his whirlwind meeting with the U.S. leader. “There are many people who will think of this as a scene from a science fiction movie,” Kim Jong-un told Trump through a translator.

That’s a sentiment many world leaders share after they’ve had meetings with the President.

Just ask Prime Minister Justin Trudeau. He’d warn the North Korean leader just how bizarre it can be dealing with the leader of the free world.