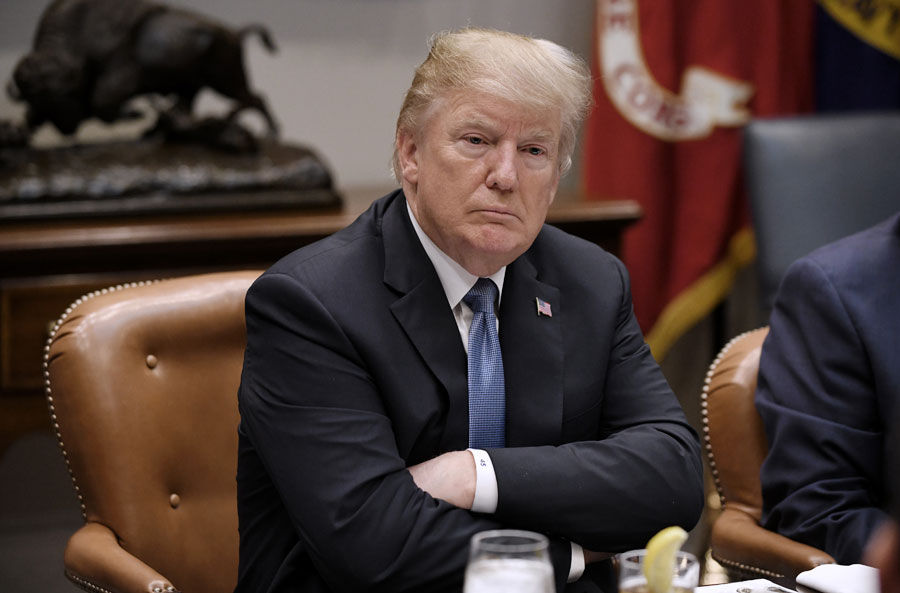 US President Donald Trump attends a working lunch with governors in the Roosevelt Room of the White House, in Washington, DC, June 21, 2018. Photo: Olivier Douliery/AFP via Getty Images.

Worried about the economy? You’re not alone.

Canadians’ optimism about the future prospects of our economy has fallen off a cliff in the past few months, thanks in large part to the trade war ignited by the U.S. president against us — and the rest of the world.

The Bloomberg Nanos Canadian Confidence Index which measures our views on personal finances, job security, the outlook for the economy and where real estate prices are headed — illustrates just how precipitously our morale has dropped.

At the beginning of this year — with the stock market booming, a rosy jobs picture and welcome possibility that Canada and the U.S. could agree on a new free-trade agreement — our confidence was sky high. The Jan. 2018 Nanos Index reached a record high of 62.1.

By June, however, this optimistic sentiment entirely dissipated. First came the imposition of U.S. tariffs on Canadian steel and aluminum exports, which was quickly followed by Canada’s  retaliatory measures against the U.S. It all climaxed with  Trump’s anti-Trudeau/Canada post-G7 meltdown, and the once sunny forecast had given way to ominous storm clouds.

This breakdown in relations between the two allies was reflected in the Confidence Index. The latest poll shows it has fallen 55.2, down 1.8 from the week earlier — the biggest drop since 2013 when Nanos began to track the confidence index.

Few days go by without the president firing off another blistering tweet warning Canadians that trade agreements between the two nations will be drastically rebalanced. This is just the latest:

These threats, it seems, are taking their toll in terms of consumer confidence.

“We rarely see an all out economic threat issued by anyone to Canada,” says Nik Nanos, whose Nanos Research tracks the issue. “It’s probably fair to say a certain proportion of Canadians think that Canada will pay and it won’t be a pleasant experience.”

In other words, few Canadians think we can win a trade war with the U.S. Our only hope is to limit the fallout.