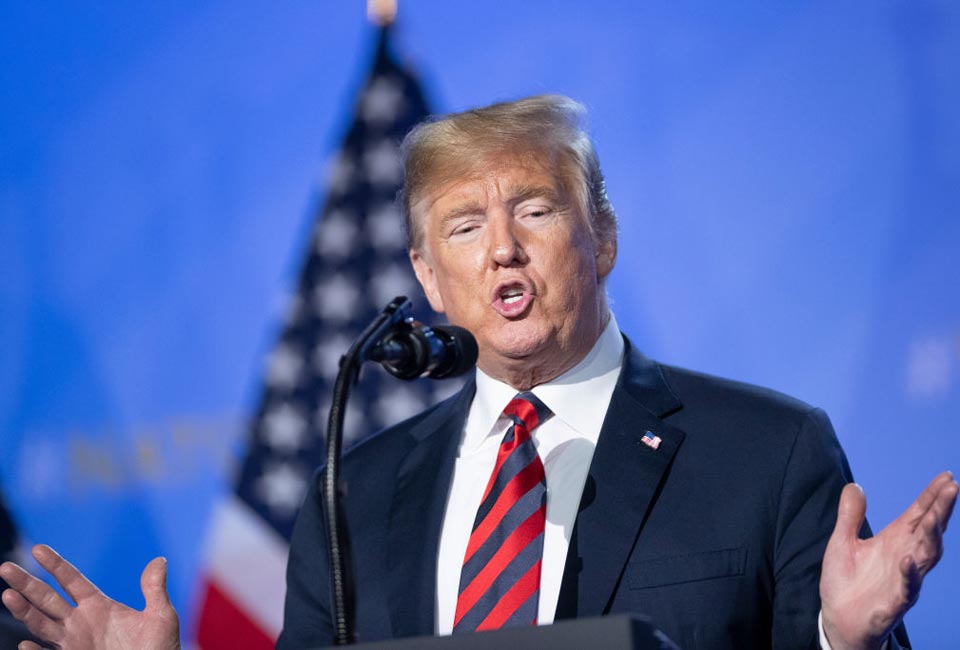 President Donald Trump gestures during a news conference at the 2018 NATO Summit at NATO headquarters on July 12, 2018 in Brussels, Belgium. Leaders from NATO member and partner states are meeting for a two-day summit, which is being overshadowed by strong demands by U.S. President Trump for most NATO member countries to spend more on defense. (Photo by Jasper Juinen/Getty Images)

Thanks to his tough negotiating skills and hard-line diplomacy, Trump boasted in his press conference, NATO’s 29 member countries had agreed to up their defence spending commitments. And, because the president had been so firm, the allies had pledged another $33 billion and would no longer be freeloading of the U.S. as they have done so since the mutual defence organization was founded in 1949.

Not according to some of the leaders who were there. While both Prime Minister Justin Trudeau and French President Emmanuel Macron agreed to spend more on building up their militaries, both said this commitment didn’t come as a result of the Brussels’ meetings but from previous NATO summits.

Still, Trump is crowing a NATO “victory” and that’s all that matters.

In fact, the whole NATO process was all-too-familiar to observers who watched Trump during the NAFTA and G7 negotiations.

Here’s how the Trump game of military brinksmanship usually plays out.

With NAFTA, Trump claimed Mexico and Canada were taking advantage of the U.S. with favourable trade deals. And, in the lead-up to June’s G7 Summit in Quebec, he accused Europe of imposing unfair trade restrictions on U.S. products. Before the NATO meetings, he accused member countries of being “delinquent” in their military commitments.

During the ongoing NAFTA negotiations, Trump has continually called out Canada for not playing fair. And in the aftermath of the G7 Summit, he called Trudeau “weak” and “dishonest”. He followed the same stunt during the NATO meetings, this time calling out Germany for being “totally controlled” by Russia.

Step 3: Threaten your allies that you’ll leave the treaty/room.

We’ve stopped counting the times Trump has threatened Canada about “ripping up” the free-trade agreement. Similarly with the NATO meetings, according to insiders, Trump went on a long rant about member countries not paying their due, threatening the U.S. would “go our own way” if his demands weren’t met.

Before he even returned to Washington after the G7 meetings ended harmoniously, Trump reacted angrily to a press conference given by Trudeau and said he wouldn’t endorse the agreement he had signed hours earlier. It was the same way at the Brussels’ meetings: just when rumours started surfacing that Trump would angrily pull the U.S. from NATO, he changed tack, saying everything was fine, even praising the organization he had just spent two days bashing. “The United States’ commitment to NATO remains strong, very strong,” he said at his concluding press conference. “I believe in NATO, I think NATO is a very important, probably the greatest ever done.”