Spat Between Premier Ford and Mayor Tory Could Get Ugly 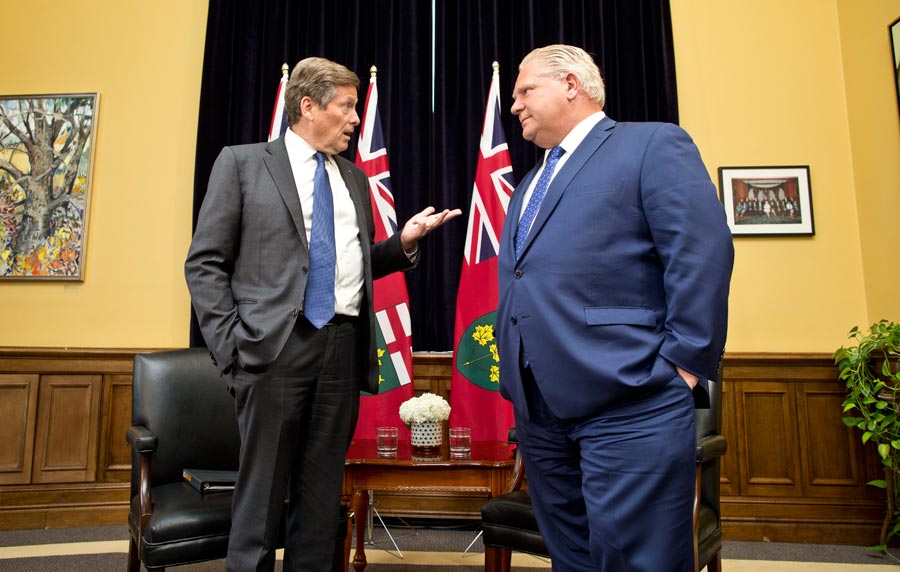 When Doug Ford campaigned on a promise to reduce the size of government, everyone thought he was referring to Ontario’s bureaucracy.

It turns out he was referring to the cities as well.

On Thursday, Ford surprised everyone — including Toronto Mayor John Tory — by telling the Toronto Star that, “we will be introducing legislation that, if passed, will dramatically improve the decision-making process at Toronto city hall.”

Referring to the city council of Canada’s largest city as the “most dysfunctional political arena in the country,” Ford’s proposed legislation would slash the number of city councillors in half, from 47 to 25.

Tory reacted angrily to the news, accusing the Premier of trying to “change the rules in the middle of the game.” Yesterday, he moved a motion at city council to hold a referendum during this October’s municipal elections asking voters if they want to reduce the number of councillors.

While both men hail from the Progressive Conservative party, relations between the two have never been friendly.

Tory, remember, soundly defeated Ford in the 2014 mayoral election. And it’s not unlikely that the mayor suspects the Premier’s attack on council could be motivated by the negative experience both he and his late brother Rob Ford had during the latter’s rocky term as mayor.

Ford’s habit of speaking bluntly and making sudden and controversial policy announcements already has many comparing him to a certain leader from south of the border.

It remains doubtful, however, that this style of leadership will resonate as well in Ontario as it does in certain parts of the U.S.

Another nemesis, Patrick Brown – who Ford replaced as leader of the Progressive Conservative Party – was also in the news today. Brown had been running for the Chair of Peel, Ont., until Ford announced he was putting a “pause” on the election of Chairs in Peel, York, Niagara and Muskoka regions. Instead, Brown showed up at Brampton city hall, registering to run as mayor in the October municipal elections.