Should We Care What Tiger Woods Said About Donald Trump? 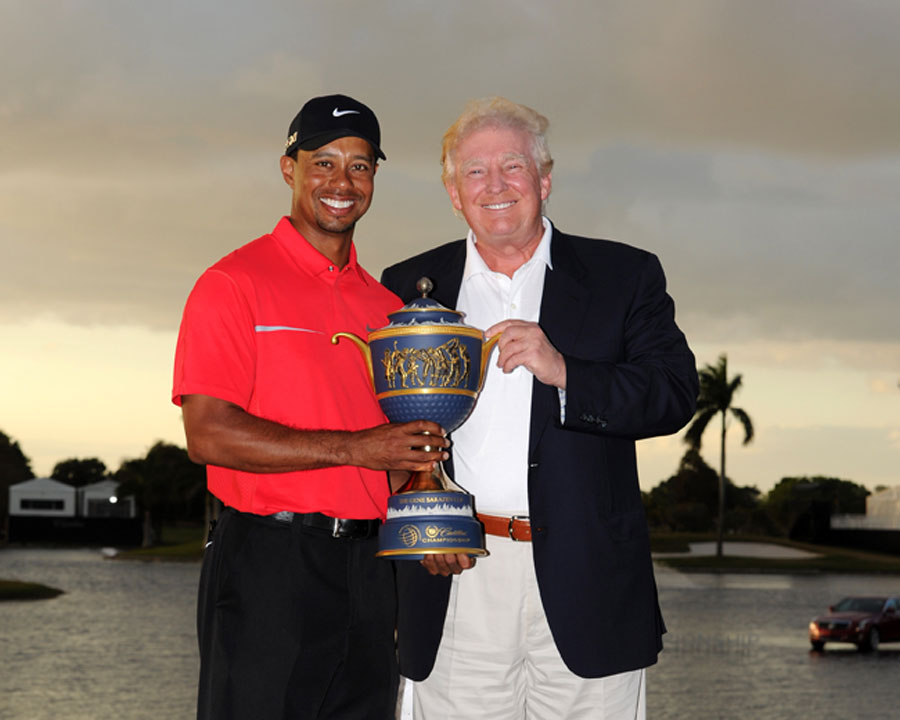 Facing the media after finishing his final round at this weekend’s Northern Trust, Tiger Woods was asked a question that defines a major beef I have with sports coverage today.

Besides fielding the usual inquiries asking him to assess his play in the tournament, about his golf game in general (specifically his poor weekend with the putter) and the health of his back, Tiger was also asked to defend his relationship with Donald Trump.

“At times, especially 2018, I think a lot of people, especially immigrants are threatened by him and his policy,” the reporter said, setting up his zinger.  “What do you say to people who might find it interesting that you have a friendly relationship with him?”

Why do we care what Tiger Woods — or any athlete for that matter — thinks of any leader or political issue? He’s one of the best golfers of all time, not a political pundit. Is his opinion on this or anything non-golf related even remotely relevant?

All it accomplished was to allow Trump to fire off another tweet about “fake news.”

This type of loaded question represents everything that makes following sports today so exasperating. Not only do you have to keep up with the scores, but now you have to know an athlete’s political stance as well. One of the greatest golfers of all time, we shouldn’t judge Tiger based on anything but his performance on the course.

When sports becomes politically charged – as it often does with race, gender or money issues – or an athlete protests a social ill (kneeling down for the national anthem),  jock commentators should leave their commentary to the front page pundits, editorialists and late-night hosts. Outside of sports, we don’t really care what their opinion is.

We grew up in an era when the sports page focused on … sports. You’d get a list of scores, an analysis of the local team, relevant stats and a longer article on a superior athletic accomplishment or a future star.

While this editorial style didn’t provide much insight into the personality of athletes, it didn’t seem to matter. Most athletes are so single-minded in honing their craft that they lack the self-awareness or introspection to make interesting profile subjects. Besides, if you really wanted to get up close and personal with a sports figure, you could always get that in long-form magazine stories or weekend sports features.

Nowadays, the score comes second to the context of the game seen through the lens of current issues. Team A wins in thrilling fashion thanks to a walk-off homer — but the coverage (especially on social media) the next day focuses on a teammate who has been accused of domestic abuse, and why the manager of the team didn’t speak out on it.

The current furor over Urban Meyer follows this familiar tired pattern. For college sports fans, he’s known as a top-rate coach who’s led teams to three national championships. Now, his reputation has taken a beating because he hired an assistant coach who had been accused of domestic abuse and didn’t take appropriate steps to stop it. This is a big issue that shouldn’t be downplayed. But why do we need ESPN analysts commenting on it?

Meyer’s subsequent suspension has given occasion for sports radio hosts and columnists to pile on. And it’s not just this issue, sports media endlessly pontificates (the worst offender is probably the Toronto Star‘s Bruce Arthur, a fine writer when he’s not moralizing, which is seldom) on why there’s no place in sport for: domestic abuse, racism, homophobia or insert any current social no-no.

Of course there isn’t room for this type of bad behaviour in sports. There isn’t room for it anywhere in society — it simply goes without saying. Yet writers and broadcasters repeat the mantra endlessly, perhaps because they’re bored of covering the scores or need to fill blank airspace. More likely, they’re out to prove that they’re just so woke, much more than us dumb sports fans who want to hear who won, who lost and who played well.

Following sports is meant to be an escape from the dreary, boring or stressful realities of life. It helps us forget the pressures of holding down a job or paying off the mortgage. We don’t want to read about war, politics or cultural issues. We don’t want to be preached to.

And we certainly don’t want to hear about what Tiger Woods thinks about Donald Trump.