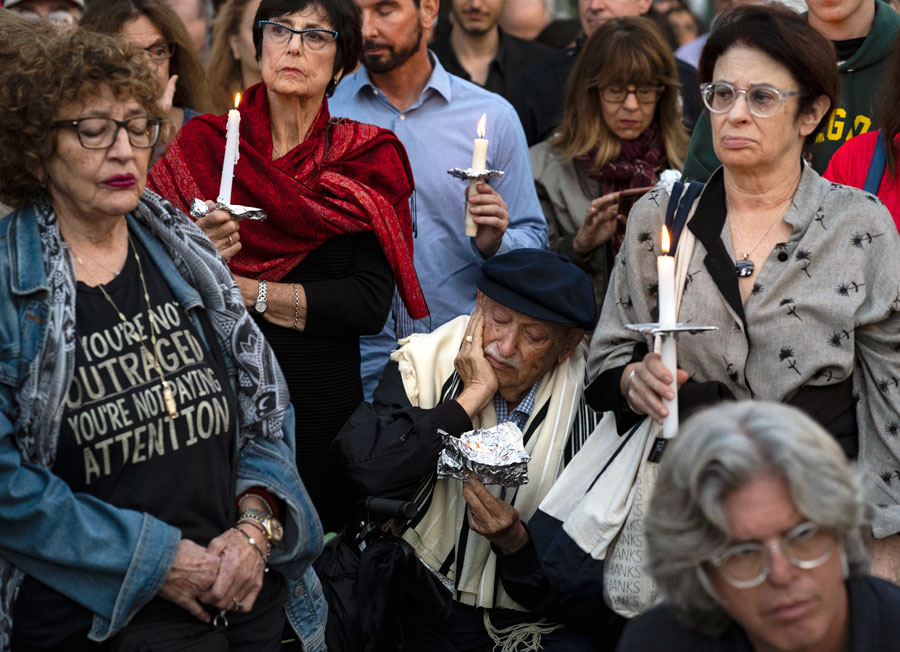 People gather for an interfaith vigil for the victims of the shooting in the Tree of Life Synagogue in Pittsburgh. Los Angeles, California on October 28, 2018. Ronen Tivony/NurPhoto via Getty Images.

Just as the bizarre pipe-bomb terror campaign was brought to a conclusion on Friday, Americans woke up on Saturday to another violent event — this time the mass shooting of mainly older worshipers at a Pittsburgh synagogue.

Robert Bowers, 46, is being charged with 29 charges, including murder and hate crimes, after he opened fire on the Tree of Life synagogue, killing 11 people.

Bowers’ motivations were clear. He made anti-Semetic comments during the shooting and has a long history of anti-Jewish propaganda on the “free-speech” website, Gab.com.

Before surrendering, Bowers apparently told Swat team officers that he “wanted all Jews to die” because they “were committing genocide against his people.”

Unlike Cesar Sayoc, the Trump supporter who was arrested Thursday after sending 12 pipe bombs to well-known Democrats, Bowers’ social media comments paint him as a Trump opponent, criticizing him as a president who “surrounds himself with *****” (the derogatory word used for Jewish people). One of his last posts, however, which may have sent him over the top, referred to the migrant caravan making its way to the U.S. Calling the migrants “invaders,” Bowers posted that “I can’t sit by and watch my people get slaughtered. Screw your optics, I’m going in.”

Many are blaming Gab.com, the so-called “free speech” website where Bowers was allowed to post his anti-Semitic comments before the shooting. Gab denied it had any link to the shooting, claiming it has a “zero tolerance” policy for terrorism or violence. The site has since been taken offline.

The tone of debate on Gab mimics the political environment in the U.S. In recent memory, the country has never been so divided or “toxic”, as Jeh Johnson, the former secretary of homeland security under former president Barack Obama, called it on ABC’s new show This Week.

So how does the U.S. stop the violence and elevate the level of political rhetoric and debate?

Johnson, along with many Americans, thinks that the culture of division begins and ends with the man with the biggest platform. President Trump must stop the violence and try to unify the country, rather than divide it.

“This particular president has a particularly large voice and a large microphone, and Americans should demand that their leaders insist on change, a more civil discourse and a more civil environment generally,’’ Johnson said.

Trump does seem incapable of ever being civil, especially on Twitter. Every time he posts comments — especially after a tragedy like the synagogue shooting in Pittsburgh — he only proves Johnson’s point.

However, Vice President Mike Pence argued on NBC News on Saturday that the president is not responsible for either the pipe bomb campaign or the synagogue shooting.

He said that both parties are guilty of amping up the volume and rhetoric of anger. “Everyone has their own style and people on both sides of the aisle use strong language about our political differences, but I just don’t think you can connect it to threats or acts of violence.”