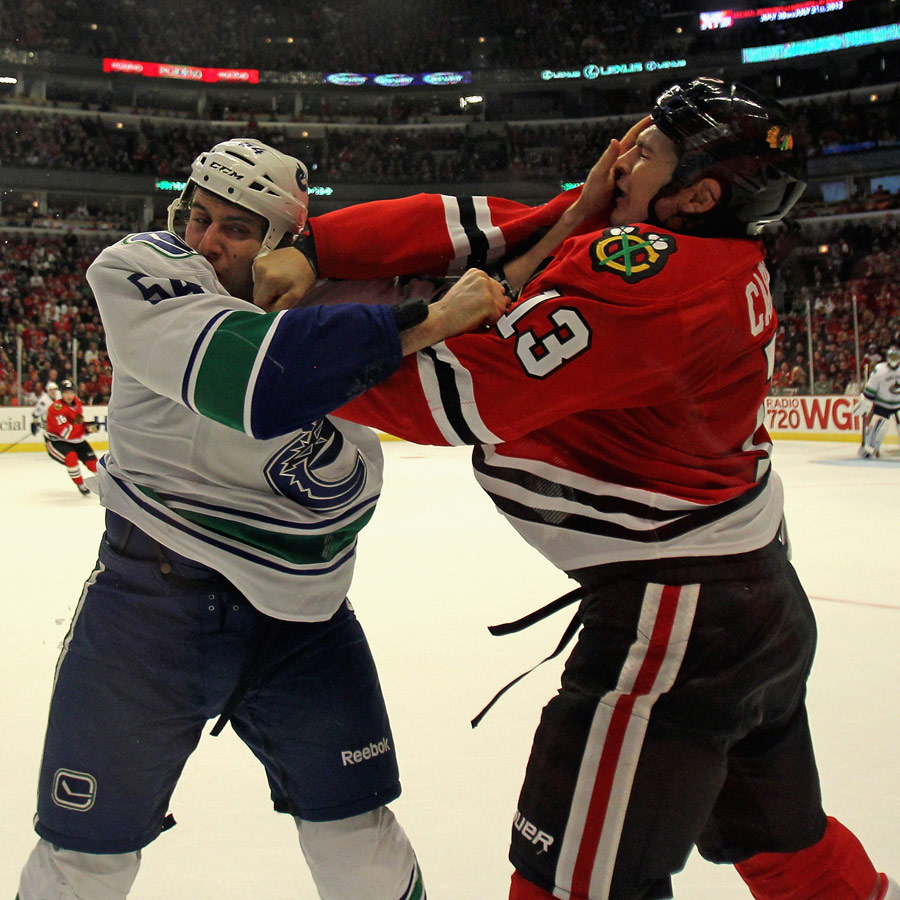 Daniel Carcillo #13 of the Chicago Blackhawks and Aaron Volpatti #54 of the Vancouver Canucks fight in the second period at the United Center on November 6, 2011 in Chicago. Photo: Jonathan Daniel/Getty Images.

The NHL has settled a lawsuit with former players for its failure to protect them from head injuries and warn them of the long-term risks of concussions.

In a Minnesota courtroom yesterday, the league agreed to a tentative $18.9 (USD) settlement that would see the 318 players suing receive $22,000 each and be eligible for up to $75,000 in medical care.

The $18 million total seems paltry compared to the billion-dollar agreement the NFL has agreed to pay its former players over a similar lawsuit. The former hockey players argued that the NHL knew about the long-term effects of concussions but did nothing to protect its athletes. The settlement agrees that the NHL does not accept any liability in these claims and protects it from being sued in the future for damages as a result of concussions.

Stewart Davidson, the lawyer representing the players, acknowledged that the settlement was small but insisted that it was the best deal on the table. “I think it’s important for players who have an opportunity to settle their case with the NHL now to understand that before they get anything through a trial against the NHL it’s going to cost millions of dollars in experts to get there, and that’s going to have to be paid for before they see a penny from any recovery, assuming they win.”

Former NHL player Daniel Carcillo could not disagree more. The one-time agitator who suffered concussions during his career and now runs a non-profit organization assisting NHLers in their life transition after they retire, called the agreement “an insulting attempt at a settlement” and called on former players not to accept it.

Until recently, NHL players knew very little about the damage concussions do to the brain as well as the long-term effects of chronic traumatic encephalopathy (CTE), a neurodegenerative disease found in people who suffer frequent head injuries.

With new concussion protocols in effect, players who suffer a suspected head injury must leave the game for instant diagnosis, and are given as long as they need to recover. Players like Sidney Crosby have missed huge chunks of past seasons due to concussions.

In the old days, however, blows to the head were considered party of the game. Players who suffered a head injury would go back to the bench and “shake it off,” often returning to the game which they wouldn’t remember the next day. As a result, many ex-players suffer the lingering effects of CTE, and suffer vertigo, memory loss or early dementia.

Some, like Steve Montador and Derek Boogaard, died in their late 20s or 30s, their deaths associated to CTE.

It’s for these players that Carcillo is so adamant that players in the suit vote against accepting the settlement.

There is still a possibility the deal will not go through. The NHL has the right to cancel the deal if not all 318 players opt in. Joining Carcillo in the “No” camp is former player Dennis Maruk, who suffered multiple concussions during his playing career.