Guardians of the Truth: TIME Honours Persecuted Journalists as the 2018 Person of the Year 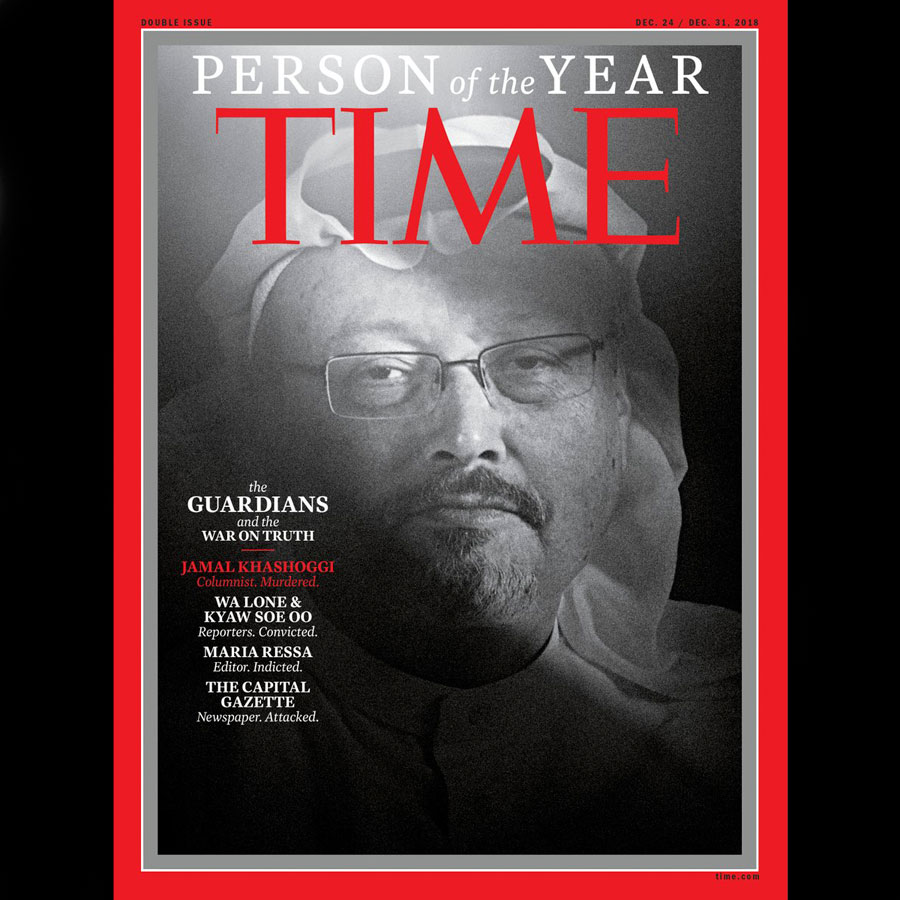 In an era when governments around the world are waging an increasingly violent war on journalists who dare criticize their regimes — when even the U.S. President has declared war on the press — TIME has fittingly named the the ones who bring you the real news as its 2018 Person of the Year.

Hailing them the as “The Guardians,” TIME has named Jamal Khashoggi of Saudi Arabia, the staff of the Capital Gazette in Maryland, Maria Ressa of the Philippines and Wa Lone and Kyaw Soe Oo of Myanmar as its Person of the Year. These people represent all journalists who, in the face of threats not only to their career prospects but also their lives, uphold the freedom of the press and report the truth.

While so much of what we read is distorted version of the truth, either through the misinformation of social media or the agenda-driven takes of mainstream media, it’s never been more important for these brave men and women to face down criticism and personal threats and report on what’s actually happening.

“The old-school despot embraced censorship,” writes TIME, describing why they chose the Guardians. “The modern despot, finding that more difficult, foments mistrust of credible fact, thrives on the confusion loosed by social media and fashions the illusion of legitimacy from supplicants.” “Because,” TIME continues, “the strongmen of the world only look strong. All despots live in fear of their people. To see genuine strength, look to the spaces where individuals dare to describe what’s going on in front of them.” Khashoggi, a Saudi-born journalist working for the Washington Post, was recently murdered in Istanbul, a killing that was clearly orchestrated by powers in Saudi Arabia. His alleged crime? Bringing to light the brutality of the government. “I have left my home, my family and my job, and I am raising my voice. To do otherwise would betray those who languish in prison. I can speak when so many cannot,” Khashoggi wrote in one of his last Washington Post columns. In June, a crazed gunman broke into the newsroom of the small Maryland-based Capital Gazette and opened fire. Undeterred by the carnage and devastation and rallied by the community, the Gazette refused to cave in. “I can tell you this,” said reporter Chase Cook hours after the shooting, “We are putting out a damn paper tomorrow.” A 55-year-old Philippine journalist is the chief executive of the Rappler news website (rappler.com), which has bravely uncovered the “extrajudicial killings” of Philippines strongman President Rodrigo Duterte. Becaue of its reporting the site has become a target of the state and Ressa has been charged with tax evasion and fraud. Ressa told TIME that she thinks “the biggest problem that we face right now is that the beacon of democracy, the one that stood up for both human rights and press freedom — the United States — now is very confused.” These two young Reuters journalists are currently languishing in prison in Myanmar for nearly a year. Their crime? Writing and researching an article called “Massacre in Myanmar,” which exhaustively documents the army’s role in the mass killing of Rohingya Muslims. The pair have been sentenced to seven years in prison for violating the Official Secrets Act. “Where is the justice to sentencing two journalists to seven years in prison just for doing their jobs?” asks Kyaw Soe Oo’s wife, Chit Su Win.