Patriot’s Owner Robert Kraft and the “Spa” in Florida – Whatever Happened to Older and Wiser? 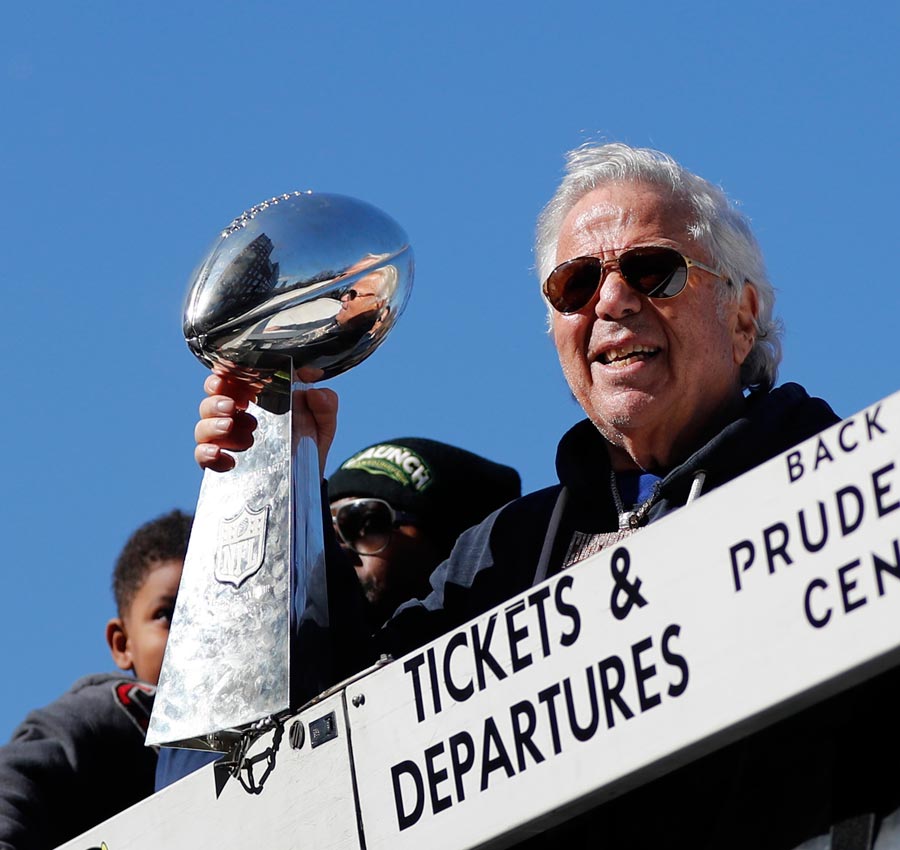 Is there no end to the list of men behaving badly?

Can they not just keep it zipped and refrain from planting their mouths and hands where they’re not wanted?  Shouldn’t the brain be the organ that determines behaviour even for people who stand up to pee?

What’s bewildering is why so many men, older American men as it happens at the moment, are being so stupid about sex and how they behave with women.

Sure, there are plenty of young men in every nation in the world who try, sometimes stupidly and awkwardly to — as we used to say — get into a girl’s pants.

In a strange twist, the head of TimesUp, MeToo’s sister movement advocating gender equality in the workplace and campaigning against sexual harassment, resigned because her son was accused of, wait for it, sexual misconduct.

But why would the 76-year old billionaire owner of the Boston Patriots frequent Orchids of Asia Day Spa in Florida, a strip mall shop that offers hand jobs and oral sex for $79 an hour?

Will boys always be boys even when they’re pushing 80?

What ever happened to older and wiser?

At first, I confess, I was somewhat sympathetic to Robert Kraft. He’s a 76-year old widower who likely wanted to exchange a straight business transaction for some quick sexual satisfaction (especially when you consider his much younger modelesque girlfriend recently had a child that is not his).

So what. Why not, I thought.  Maybe that kind of sex should be legal.

Kraft probably wanted to keep it simple, no strings attached, no risk of blackmail.

Then I learned more about who the “orchids of Asia” were: young trafficked sex slaves confined to the premises.

Kraft wasn’t just indulging in some harmless transaction between consenting adults. He was participating in the exploitation of helpless young woman for his own pleasure. And now he’s facing a first-degree misdemeanour charge, and has pleaded not guilty to two counts of soliciting prostitution.

Kraft wasn’t the only high profile, wealthy older man caught in the police raid of the widespread prostitution and human trafficking ring.

John Havens, 62, former president and chief operating officer of Citigroup was also charged for solicitation of a prostitute. So was John Childs, 77, billionaire founder of a private equity firm.

It’s a dynamic — powerful older men, very young and vulnerable women — that plays out in some form in almost every episode of men behaving badly.

Somehow, the idea of sex slaves is what it takes to excite and satisfy some men. R&B superstar R. Kelly has been charged with aggravated criminal sex abuse involving four females, three of whom were between 13 and 17. The charges say Kelly used force or the threat of force.

There were plenty of rumours about his behaviour for years.

In 2008, he was charged with 14 counts of child pornography and making a 27-minute sex tape with an under-age female.

But “a high-powered defence team convinced the jury of nine men and three women that the identity of the girl was not conclusive,” reports the New York Times, and he went free.

Finally, it took the MeToo movement and a six-part investigative documentary series on Lifetime, “Surviving R Kelly,” to bring his behaviour out in the open.

“He would cruise McDonald’s near high schools and have someone from his team go up to a girl, get her number,” the documentary’s executive producer, Dream Hampton, said during a NPR interview.

Kelly will be arraigned in court in Chicago on March 8.

Jeffrey Epstein, one of the world’s most successful and wealthy fund managers, was notorious for having sex with underage girls and for “loaning” them to other rich, powerful men.

More than three dozen women, many underage, complained to the FBI about molestation and there was enough evidence to send Epstein to prison for life.

Instead, he made a sweet plea deal that put him in a private cell in the Palm Beach jail for 13 months on a work release program, allowing him to leave the jail and work from an office in West Palm Beach six days a week.

The plea deal also stopped the investigation and granted him immunity from federal criminal charges.

Behind the deal was Alex Acosta, then Miami’s chief federal prosecutor. Acosta is now Secretary of Labor in Donald Trump’s Cabinet.

A recent blockbuster investigative piece in the Miami Herald suggests that Epstein’s young victims were sold out by Acosta.

“For reasons that are not entirely clear, Acosta took extraordinary measures to let Epstein — and, crucially, other unnamed people — off the hook,” according to a New York Times columnist.

All that happened before the MeToo movement.

Now, both Epstein and Acosta are back on the hook, big time.

Meanwhile, Bill Cosby is currently serving a prison sentence for being a “sexually abusive predator.”

Then there’s Harvey Weinstein, whose rape and sexual assault trial will take place in New York in June. He’s scheduled for a pre-trial hearing on March 7.

He’s been charged with rape of one woman and forcible sexual assault on another but more than 50 women have accused him of sexual assault and, well, behaving very, very badly, kicking off the MeToo movement.

Finally, there’s Donald Trump and his self-confessed penchant for you know what-grabbing and forcible kissing.

In 2003, he had this to say about his good buddy Epstein: “He’s a lot of fun to be with. It is even said that he likes beautiful women as much as I do, and many of them are on the younger side.”