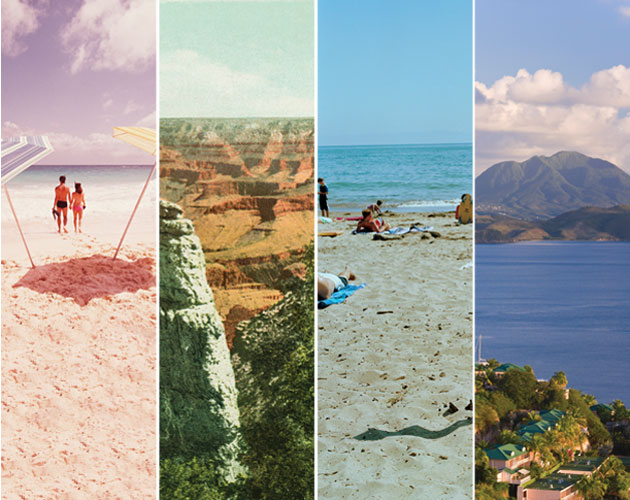 From Bermuda and Puerto Rico to Sin City and the American Riviera, we look at five inspired destinations for your next getaway.

1) Where the Twain shall meet

Imagine there’s a country, it’s easy if you try: pink sand below us, above us only blue skies … Well, John Lennon imagined it, and it was here in Bermuda where, after five years of being holed up in the Dakota in New York City, he wrote such songs as the sadly prophetic “Living on Borrowed Time,” “Watching the Wheels” and “Cold Turkey” for what eventually would be his seminal return album Double Fantasy.

Lennon wasn’t the only artist who was taken with this British outpost – made so by the crash landing of colonists en route to Virginia in 1609. “Bermuda is the right country for a jaded man to loaf in,” said American author and humorist Mark Twain, who was so smitten that he made the islands (Bermuda is actually an archipelago of more than 180 smaller landmasses) his second home. Timing, of course, is everything: from now until March, the country is celebrating Bermuda Rendezvous, where you can take in Bermuda Gombey dancing, glassblowing and cooking lessons, play a round of golf in the moderate climate (its subtropical location makes for mild winters) and learn about culture, heritage and tradition. Canadian hotelier Fairmont has town (Hamilton Princess) and beach (Southampton) locations, and both Air Canada and WestJet offer direct flights, at just less than three hours from Toronto. www.gotobermuda.com  —Vivian Vassos

You may love Sin City, but sometimes even the most hardcore players need a little respite from the roulette wheel. Go into the wilds – and the past – of Las Vegas with a Pink Jeep tour. The sightseeing company has been around for half a century, driving adventure seekers around America’s southwest with 10 tours in the Las Vegas area alone (from the Grand Canyon to the Hoover Dam and everything in between, including downtown Vegas’s Fremont Street, the storied Golden Nugget and the city’s desert environs). The Red Rock Canyon Tour includes the ranch that recluse Howard Hughes built along the tour’s 13-mile drive. Surprisingly, it’s just a few minutes away from The Strip’s high-stake action, and the serenity and red-rocked beauty of this place is enough to keep anyone a captive audience. Even better, to celebrate 51 years young, Pink Jeep Tours Las Vegas is partnering with the Nevada Cancer Institute for Trek for the Cure, where $5.10 from each Red Rock Canyon Tour will go directly to the institute. 888-900-4480, www.pinkjeep.com  —VV

If you’ve thought about combining fun in the sun with honing your senses and shaking a leg, the Courtyard Isla Verde Beach Resort in San Juan, Puerto Rico, has got your dance card ready to be filled. Its low-key beach location is perfect for multi-gen family holiday goers (separate kids’ and toddlers’ pools too). It is also a short drive to the rich history, colourful architecture and culture of Old San Juan. With complimentary bonuses, like weekly salsa dance classes and bi-weekly wine tastings, and a 24-hour casino (okay, that’s not free!), there’s plenty of adult diversions to go around. 800-791-2553, www.sjcourtyard.com  —VV

4) Head for the Coast

Each year, thousands wash up in L.A. with dreams of stardom; some leave, yet many stay on long after those dreams are quashed to reinvent themselves in another part of the state. Some may choose a less angst-ridden town, say Santa Barbara, to which
the drive can be made in less than two hours from L.A. or slightly longer if you opt for the scenic Pacific Coast Highway.

Nicknamed the American Riviera thanks to its Mediterranean climate, Santa Barbara is all picturesque Spanish colonial architecture and lies smack between the Pacific and the imposing Santa Ynez mountains. On arrival, we check into the newly renovated Hyatt Santa Barbara, formerly the Mar Monte, which was built in 1931, and is across the street from the beach. Even though the exterior is old-style California Spanish Colonial, we’re escorted to a contemporary room complete with private terrace, which overlooks both ocean and pool.

After ordering a picnic basket with wine from the hotel kitchen, we rent bicycles and venture along the beachside paths before finding the perfect spot. We descend a wooden staircase to the sand and sit, eating as pelicans soar overhead. There, near the surf, with the cool Pacific breezes whispering up the cliff tops, it’s easy to see why this quintessential California experience continues to hold such mystique.

Santa Barbara is quiet and quaint, and has managed to maintain its historic appeal while becoming modern enough to attract tourists and multi-millionaire residents like Oprah Winfrey. The town’s main avenue, State Street, allows for an easy stroll to peruse boutiques, restaurants and art deco movie houses. Intermezzo Bar, a French-inspired café, complete with cane-backed chairs and bistro tables, beckons. We discover it’s part of Wine Cask, a restaurant that offers five separate dining spaces and experiences and a wine list that’s merited winner of Wine Spectator’s top award 27 years running. I test the bartender’s skill at making Sidecars (spectacular) and the sommelier’s selection of buttery chardonnays and distinctive Cabernets (sublime). A starter of Dungeness crab cakes and tuna tartare, mains of grilled marinated rack of lamb with warm Mediterranean salad, wilted dandelion greens with spiced date Muscat-reduction and a pan-seared kurobuta pork chop with fava bean, caramelized shallot and black truffle demi glaze made for one of the best meals we’ve ever had. Period.

One gets the impression that Santa Barbara’s resident vintners, shopkeepers and surf instructors came for the fame and stayed for the beauty. That’s true California dreaming. 805-882-1234; www.santabarbara.hyatt.com —Kim Izzo

Looking for a getaway on a Caribbean island less travelled? Look no further than St. Kitts. Just 69 square miles, the island – named for Christopher Columbus, who discovered it – is home to a handful of well-appointed vacation properties. If you’re the type that loves the all-inclusive, St. Kitts Marriott Resort & The Royal Beach Casino is 10 minutes by car from the airport. The capital, Basseterre, features the Caribbean’s largest Vegas-style casino, challenging golf at the Royal St. Kitts, sandy stretches on North Frigate Bay beach and an easy stroll to The Strip, where you can “go limin’ ” – eat, drink and be merry – with the locals at hangouts like the Shiggidy Shack and Reggae Beach. The best part? Air Canada launches its new non-stop Toronto-St. Kitts weekly service on Dec. 23, and the Marriott has partnered on some great package deals. Happy holidays. St. Kitts Marriott Resort, 869-466-1200, www.stkittsmarriott.com  —VV