A Journey to the South Pacific 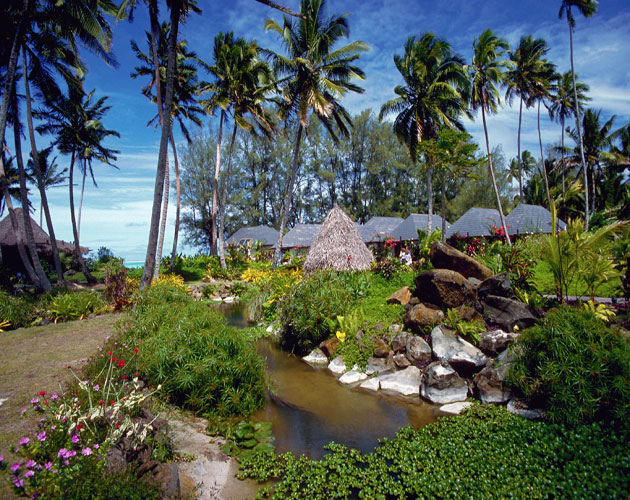 Anne Gordon discovers the true beauty of the Cook Islands lies within its people.

Located 1,500 miles off the New Zealand mainland, the Cook Islands are called by many, the Secret Islands. They are the visible result of hundreds of eruptions along fault lines that range across 2.2 million square kilometres of ocean.

Stunning geography is only part of its appeal. It’s the people – characters honed by the sea and the remoteness of this place – who also lure us here. After migrating thousands of years ago from China through Taiwan and finally arriving on the islands of the South Pacific, the culture of the Cook Islanders, as a matter of survival, was a violent one. Wars, cannibalism and other nefarious activities were rife.

But today, all that has changed. Where the smiling greeting is “Kia Orana” (May you live long), one would go a long way to find a gentler, welcoming people.

These islands are still largely free of mass tourism, lending the days a tranquil ambience. Nights, meanwhile, find women wearing crowns of fragrant frangipani and gardenias, dancing the hula with wild abandon. The men who accompany the dance are masterful drummers, reputedly among the best in the world.

Traffic lights are non-existent. One can ride the island bus or hire a scooter and join the local populace; silver-haired grandmothers carrying shopping bags bulging with papayas and bananas, voluptuous island ladies in colourful pareaus, and families – sometimes three or even four on one scooter – puttering along island roads.

One night, I dined with the son of an island queen. Like most Polynesians, Tupe Ariki Samuela Napa (Sam for short) has a strong affinity for the sea. His mother, with a noble bloodline going back 48 generations, presently reigns as Paramount Queen of Takitimu.

Following in the ways of his ancestors, Sam embarked on a sea voyage of 7,000 nautical miles in 2010, travelling with five others to China on a traditional Polynesian vaka, a double-hulled ocean canoe. With white teeth gleaming against nut-brown skin giving him the appearance of a dashing pirate, he related how many had told him they wouldn’t make it. “Cyclones and an earthquake in Indonesia were just some of the hazards along the way. But it was an experience of a lifetime,” he said. “I was fortunate to learn traditional navigational skills from Koronui, a Cook Islander famous in the Pacific as a traditional navigator.”

Later, in a tropical garden overlooking the Cook Islands Marine Preserve, I am in the presence of Tua Pittman, a local island chief. A master navigator, he, too, in the style of ancient Polynesians, charts an ocean passage relying on stars, wind, waves and the flight of birds. When he chants a traditional greeting for our gathering, I close my eyes, attuning my mind to his mysterious vocalization. Caught up in the moment, the melodious timbre of his voice led me to imagine a powerful Tua of long ago, riding the bow of a vaka, calling to ancient gods of the sea.

A walking tour with the island herbalist and mountain guide Papaapaiikioeiaku Teuruaaa (Pa for short) takes me to Rarotonga’s mountainous centre. Bare-chested, wearing baggy shorts with spliced palm fronds fastened to his arms and legs with beaded bands, dreadlocks knotted here and there covering his head, he’s tucked a bunch of flowering thyme behind one ear and a tattered frangipani blossom behind his other, it’s his island camouflage that makes him as much a part of the scenery.

Pa claims to have cures for virtually every ailment known to man, including cancer. As we stroll along winding dirt roads, through bush, across streams and to the foot of craggy mountains covered in dense jungle foliage, we munch on guavas sliced straight from the tree and squeeze a sticky stream of juice from a foul-smelling Noni fruit on our arms to prevent sunburn.

The darling of celebrity visitors, Pa treated a well-known Hollywood film star on one of her trips to the island. “What ailed her?” I asked, not expecting to get an answer. Chewing on a piece of greenery, he looked at me with a grin. “It was all in the mind,” he said. I put her to work in my garden and she was cured in a very short time!”

After my time spent in the Cook Islands, I had no doubt.

If you’ve done Hawaii or are en route to Tahiti or New Zealand, a stop here is a must for those who prefer the road less travelled. Named for its discoverer, the 18th century navigator Captain James Cook, the country is made up of 15 islands, tucked between New Zealand and Tahiti. It is a self-governing county, but its close ties with New Zealand include using N.Z. currency as its own as well as the same official languages, Maori and English. No matter what island you are visiting, scuba diving, snorkelling and the hunt for sailfish and marlin are popular ocean activities. Here are a few of the more traveled.

–Rarotonga, the main island, is a place of volcanic peaks crowned by tropical cloud forests and encircled by white coral beaches set in a cobalt blue ocean. At the local market, fish, vegetables, fruit, sarongs, shell jewelry – it is a source of island delights. And although the superior black pearls for which the islands are famous are expensive even locally, lesser gems can also be bought from a market stall.

-Among its 14 sister islands, Aitutaki is known for its rainbows. Its lagoon – said to be the most beautiful in the Pacific – is the haunt of the grey ghost: with an artful cunning, these stealthy silvery fish are like shooting stars. One minute you see them, then suddenly, they melt away into their watery habitat.

Eight million years old and famous for its birdlife; Great Frigate Birds, Brown Bobbies, Kura and Blue Kingfishers, Atiu is a dream place for ornothologists. Its coastline is stippled with sea caves once used for burials. Today, ancient spirits share the caves with tiny swiftlets. Bat-like, the Kopeka is able to navigate the limestone caverns in total darkness.

–Manahiki, one of the smaller but economically important islands of the Cooks is a four-hour flight from Rarotonga. In a massive lagoon, black pearls much favoured by Elizabeth I, Catherine the Great and Empress Eugenie, wife of Napoleon, are cultivated and harvested by pearl farmers. The royal ladies believed that black pearls were symbols of their elevated status.

Getting there: Air New Zealand has direct flights from Vancouver to Rarotonga.(www.airnewzealand.ca)