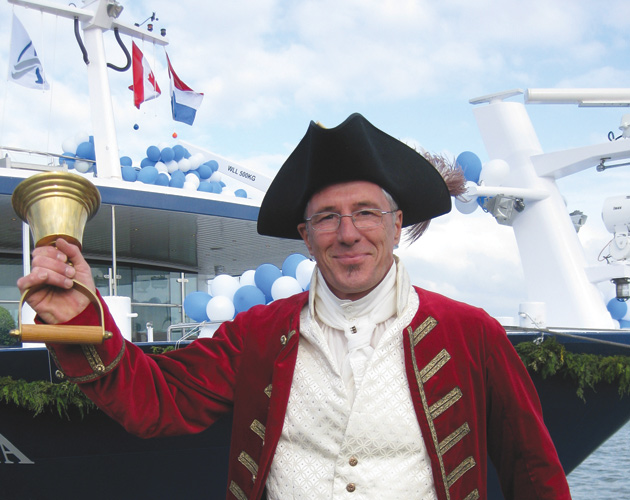 On a river cruise in northern Holland, Vivian Vassos finds there was a time when Netherlanders ruled the seas.

The Batavia shipyard in Lelystad, Holland, is nothing without its history.

A replica of a 1629 ship, the eponymous Batavia wrought from 17th-century methods and traditions, sits proudly in the harbour while another, the 7 Provinces, lies in the yard, like a half-built Gulliver tied up, all gigantic exposed ribs, open decks and rough wooden edges. Here, 300 volunteers do the work, led in part by Willem Vos, one of the few traditional shipbuilders left.

No easy feat, as the modern-day floating museum that is the Batavia is 46 metres long, features 100 hand-hewn sculptures – all of oak – and took 10 years to build. The original was the Titanic of her times and sank by running aground somewhere in the South Seas on her maiden voyage to Australia. The shipwrights of old didn’t leave any plans – if they even had any – so Vos and crew must rely on paintings by artists who were witness to the ships in battle during the Dutch wars against the Brits. (Think of them as today’s photojournalists.) Peering through the ribs of the half-finished 7 Provinces, I try to imagine the cannon of this man-of-war, all pounding blasts and smoke. She’ll be resplendent with 80 guns and 300 sculptures and, when finished, she’ll be floating alongside her sister.

Yes, a tiny North Sea country known best for its tulips, wooden shoes and windmills (okay, we admit that it’s the cheese that we’re really fond of), was once the ocean-going superpower of the world. In the 1600s, the Dutch East India Company (VOC) claimed its stake as the top seafaring trader of spices, silks and other such riches from the exotic East, particularly the region known today as Indonesia. (Its capital, Jakarta – first named Batavia by VOC raiders – became a colonial epicentre for these spice merchants’ influence.) The best shipwrights in the world were based in Holland during its “Golden Age,” and Lelystad, on what was then the South Sea – Zuiderzee in Dutch – was its superhub (before the dyke builders constructed a cross-water causeway to Enkhuizen, another shipbuilding town, cutting it off from its saltwater North Sea sibling, thus creating the freshwater body of water now called the Ijsselmeer and ending the area’s shipping prowess). From here, ships would sail around South Africa’s Cape of Good Hope (in the hopes of getting to India unscathed) and all the way to South America’s Cape Horn (named for Hoorn, another charming Dutch shipbuilding town). A nation of less than two million people at the time, it also made its mark with the Dutch West India Company, from Nieuw Amsterdam (the little town on the Hudson we call New York) to Tasmania, discovered by the Dutchman Abel Tasman.
In Lelystad, Hoorn and Enkhuizen, I’ve discovered a traveller’s trifecta: history, charm and access to the Northern Tulip Road, a road less travelled but equally as impressive as the more common garden paths of Holland come spring. And so has another seafaring band, Avalon Waterways. The company has just christened two ships, the Vista and the Visionary, “panorama class” vessels that feature larger suites with wall-to-wall glass doors that open to create a balcony – with the bed perfectly positioned to take in the passing views. The bonus: sojourns feature a focus on regional culture. Take, for example, a jenever (the precursor to what most of us know as gin) and cheese tasting in Holland or the Culture through Cuisine program, where local chefs come onboard to showcase native ingredients.

Celebrating a ship’s christening, too, has its history – a brutal one, at that. “Christenings started with the Vikings,” says Avalon president Patrick Clark. Bloodletting, human sacrifice – it wasn’t until the Greeks and Romans decided to switch from blood to water, adds Clark, that the carnage subsided. “In the Middle Ages, it was wine in a golden goblet,” he continues. “The goblet would then be tossed into the water – not against the side of the ship.”

It was the Brits who began the tradition of the Royal Family doing the honours, Clark adds; from there, the idea of the godmother was born, using a bottle of champagne swung from a rope to smash against the side of the hull. “Room temperature,” says Clark with a smile, “for maximum fizz.”

From maximum fizz follows maximum opportunity – to take in some of the most beautiful scenery and history from a viewpoint that’s practically in the country’s backyard. Sidling up to the centuries-old port in Enkhuizen, the ship is docked a stone’s throw to town – and walking tours or climbing aboard a bike or bus that might take you on a guided expedition to a working windmill or a cheese shop for a tasting. Or, as in Lelystad, a chance to stand on the deck of the Batavia, imagining a hoist of the anchor and a trip round the Cape of Good Hope.

In spring 2013, the Visionary will join another one of its sisters, the Luminary, on the Tulips of Northern Holland river cruise, one of more than 70 itineraries through Europe. Come April 2013, the Vista will also work that perfect Tulip Time that makes the country a magnet for naturalists and gardeners alike, then continue to carve the waters of the storied Rhine and Danube rivers through central and eastern Europe through the fall.
1-800-268-3636; www.avalonwaterways.ca