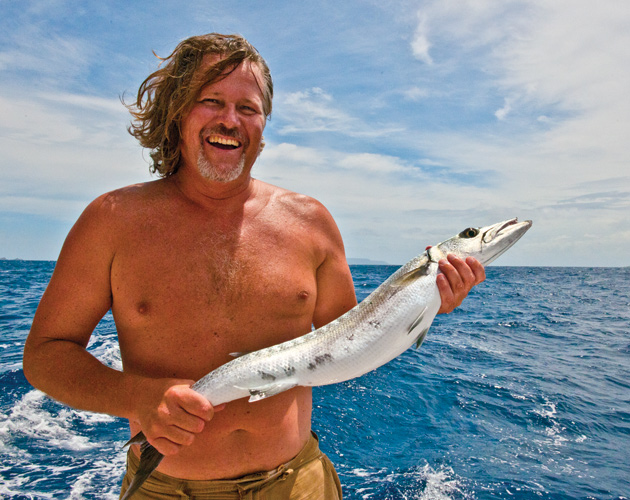 A new take on small-ship cruising: exploring the most intimate corners of the French Caribbean on board a Catamaran.

GUADELOUPE IS THE PERFECT combination of nature’s best and hedonist French chic,” says Magnus Lewin, 46, a veteran of the vacation ownership-hotel industry, one of the founders of TradeWinds Catamaran Cruising and, by a stroke of luck, the captain for this particular journey round some of the Eastern Caribbean’s less charted waters. “Nowhere else will you get the best of both worlds.”

If being aboard the New Beginnings, moored on the edge of the Jacques Cousteau Marine Park by the Petite-Terres islands in the French Antilles, then, yes, it certainly suits the definition of hedonism, a sensual self-indulgence. The butterfly shape of the island of Guadeloupe only stands to add a sybaritic nature to the whole affair, ensconced in a region that is an overseas department of France – the euro is the currency here, but that doesn’t deter one from taking in a selection of French wines on the main island of Grand-Terre – yet its hidden-gem disposition is what makes it unique.

Of course, the inhabitants here may call themselves French, but their heritage is infused with the blood of Breton corsairs – pirates who swashbuckled their way through the West Indies in the 18th century. Long before these buccaneers, the Arawaks, Caribs, Spaniards and Africans inhabited this off-the-beaten (read safe haven) idyll. Rum and its running, the enterprise of pirates and prefects alike, still makes its mark today as the chief export, with sugar following a close second.

With a small ship like a catamaran – it suits eight friends or members of a multi-generational family quite nicely – setting sail to Marie-Galante, about 15 kilometres southwest of Guadeloupe, is all the more intimate. In essence, a floating mini boutique hotel for those who may not want to break the bank on chartering a yacht or don’t have the wherewithal to man the ship themselves. “Sailing on a catamaran is the ultimate way to see the hidden secrets of this tropical paradise,” says Lewin, whose company also features itineraries that go up-close in Greece, Turkey and Central America. “We can take you to the hidden coves that land-based visitors and cruise-ship guests never get to see.”

Or simply, the pursuit of pleasure on the azure sea.
www.tradewindscruiseclub.com