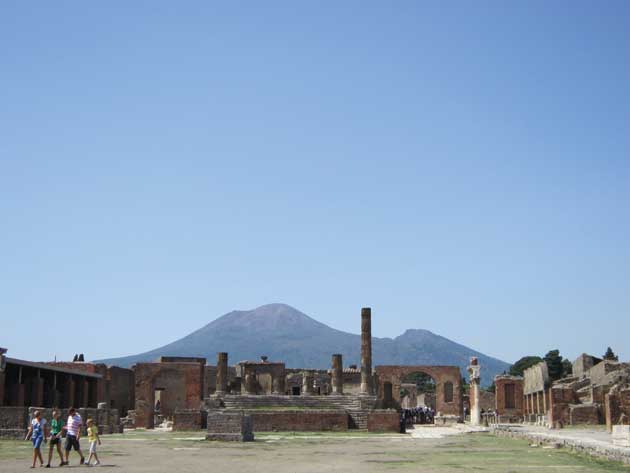 It may be ancient history, but cruising the Mediterranean is an all-ages affair.

Can you hear the mermaids singing? Or is it the siren’s call? No, perhaps it’s the cries of men magically morphed into dolphins as punishment for their treachery. Whatever it may be, the truth is that it all started with a myth, powerful in its longevity, an ancient tie that binds the Mediterranean, from the coast of Greece to the shores of Italy and Spain to the beachheads of Tunisia. It’s the story of Ulysses, an ages-old tale spun in a way that exploits the foibles of mere mortals: lust, greed, temptation trussed up in the name of true love – a love so great, Ulysses would endure all of the above and more for his 10-year odyssey, mostly by ship, to get home from war and into the arms of Penelope, his faithful wife, on the island of Ithaca.

We, however, only had 10 days for our own Mediterranean odyssey, a graduation gift to our son, about to embark on a university career majoring in history. Our teenaged daughter came along for the ride, so it was key that we could find a mode of transportation that would allow us to cover all our bases and please the multi-gen nature of our group. Holland America Line had just such a ticket – the 10-day Mediterranean Enchantment on board the Noordam, with eight ports of call, including Rome (eternally fabulous!), Florence (yes, Michelangelo’s David is that good-looking!), Monaco (and the casinos of Monte Carlo!) and the aforementioned Tunisia.

Ulysses’ story has inspired place names, like Sorrento (for the sirens), near Naples in Italy, another port of call, and where Mount Vesuvius still blows smoke when it gets miffed. The most famous of Vesuvius’ by-products, Pompeii, is a continually evolving archeological dig, with new discoveries unearthed at every turn.

It’s eerie here, even under the midday blast of the sun. As much as 20 feet of volcanic dust covered the city in AD 79 (the lava flowed in the opposite direction) and although dust may seem just like, well, dust, it was so intensely thick it buried everything within a 25-kilometre radius, including 2,000 of the city’s populace – alive. Frozen in time, bodies are still in crouching, cowering poses they struck as the dust preserved them and all that stood around them. It was a lethal catastrophe, but an almost as effective preserver of homes, public buildings and the details within them. Mosaics are still visible, vibrant and fairly intact, as witnessed at a house where it’s said that Poppea, mistress and later wife of Nero, the emperor, famed fiddler and all-round general nut bar, made her home. The walls of brothels (there’s no mistaking the phallic markers at the entrances) and places of worship continue to stand side by side, and one of the world’s oldest public water fountains, located at a central junction in the city, still flows with the mountain’s spring.

Thinking archeologically, another port of call takes us  to Tunisia and the Bardo National Museum in Tunis, where the most incredible collection of Roman-era mosaics hang on the wall like paintings and where you can see Ulysses’ encounter with said sirens laid out in the puzzle-like stones.

Carthage, too, is found here on this northern tip of Africa where the Arab Spring got its start – and some thousands of years earlier where the Phoenician Queen Dido pined for her sweet Trojan prince Aeneas (of course, it’s also part of a legendary recounting as told in Virgil’s Aeneid) and from where Hannibal marched his elephants to take on the Romans.

But some of us appreciate a slightly more updated sensibility. In Barcelona, where we make port for two days, we discover a modernist art and architecture dream. Gaudí, Picasso, Miró, all challengers of the visual sense, and the city’s grand design, right down to its lampposts, make the most of these Spanish sons. From Gaudí’s work-in-progress masterpiece of a basilica, la Sagrada Familia, to Picasso’s simplistic mural in a public square opposite the old quarter, we discover that age and art have no bearing on our common level of awe.

Back on board the Noordam, there’s plenty to keep all ages entertained: a casino for card sharks, movies on a big screen on a nightly basis, cooking classes for the culinary keeners – and an old-boys’ club library and Internet café where every age group happily congregates to read the news, check out a book (there’s everything from the Classics to guide books) or just log on and send an email or two.

No cruise would be complete without the mention of food, and feeding this mass is a major accomplishment by any standard. Having a number of ports of call is also an advantage for accessing the freshest local ingredients available. “In Italy and Greece, we will have market suppliers in port that offer what’s sustainable and in season, from the cold cuts to the cannoli, so we can also offer special occasions like our Taste of Italy night,” says executive chef Thomas Schumann, who understands that, even with the task of wining and dining 850 to 900 people a day in the main dining room alone, one size does not necessarily fit all. “It’s no problem when Grandma asks for pancakes for her little granddaughter – at lunch,” he says of the need to give personal service, regardless of the ship’s size.

That said, he adds, “Guests are pretty predictable on any given night.” On a board inside the spotless stainless-steel kitchens, Schumann and his staff estimate the numbers of each dish, from what he considers will be ordered the most to the least, that need to be ready to go for the service that day – in this case, Alaskan king crab legs topped the list at 280 servings, while savory grilled tofu (there’s always a vegetarian option) brings up the rear at 12. And for dessert this evening? “I’m prepping 200 crème brûlées – and 12 fruit plates,” says Schumann. Ah, how well he knows us.

Don’t miss shore excursions to Nice, at the Monaco port of call, where you may be lucky enough to land during the flower and farmers markets – deux croissants, s’il vous plait!; there are also opportunities to cook with a countess in Capri, spend a day at the beach in Sicily and visit a pearl factory on the island of Majorca in Spain, among others. 1-877-932-4259; www.hollandamerica.com to book or to locate a travel professional in your area recommended by Holland America.