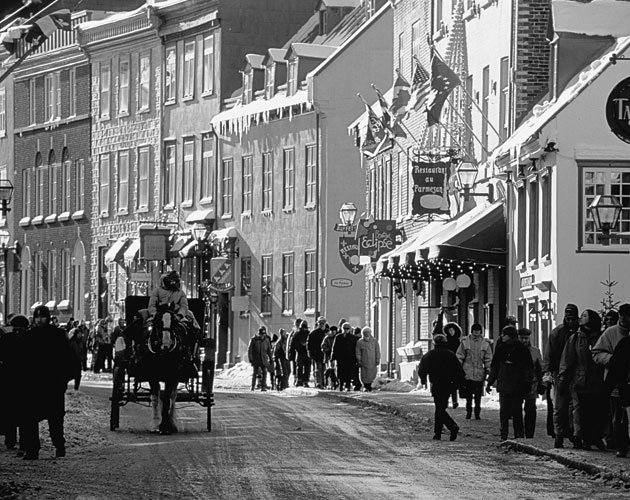 There’s something to be said about the enduring je ne sais quoi of Quebec City. At the age of 405, it’s North America’s oldest burg and harbours more history than you can shake a Bonhomme at, perhaps a reason why the readers of Travel+Leisure voted it the top destination city in Canada in 2013. Today, this port city is host to cruise ships making a stop along the St. Lawrence River, the world-famous Winter Carnival where you can find said Bonhomme and home of one of the most consistently ranked top hotels on the continent, Auberge Saint-Antoine (another T+L fave, and one of our own, as well).

Speaking of history, the Price family bought the property 23 years ago, when this lower part of town was not exactly considered hip. But it posed as the perfect purchase to allow the family’s two passions: hospitality and history, and the Museum of Civilization was right next door. It took 10 years to complete the hotel, as it coincided with the ongoing archeological dig beneath the site. The hotel itself is an archeological dig, with the site dating back to 1690. Segments of what has been unearthed – cannons, pottery, photos – are on display, whether the gun battery and its holding stones glassed in and left untouched as a room with a different kind of view at the hotel’s café-bar Artéfact or bits of china that have been light-box framed and mounted at the door of each room.

And this is definitely a town where the citizens know how to dig in to winter: no cocooning, it’s time to celebrate the sub-zero temperatures. Giant snow slides appear alongside expressway columns, plastic walking canes are filled with a warming, alcoholic elixir and parkas and furs are the au courant fashion statements.

Have dinner at Panache, the hotel’s award-winning restaurant featuring Parisian-trained chef Louis Pacquelin. Inside, you’ll find a small wooden statue of the hotel’s patron saint, watching diners from the rafters of the historic room. Or try this holiday-inspired recipe for Saint-Apollonaire duckling with cranberries and baby turnips at home.

If you’re a fan of jazz, head to Largo on St. Joseph Street East. If carnival cool is what you’re  after, then the city will be one big fête from Jan. 31 to Feb. 16, 2014, and, according to the local inhabitants, it runs all day everyday. Joie de vivre!
www.quebecregion.com

Where’s the Boeuf? Looking for an authentic yet elevated Quebecois dining experience? Try Le Chic Shack on Fort Street, where what seems like burger joint fare gets the gourmet-meets-traditional treatment. Even cheeseburgers go local, topped with ingredients from the region’s dairies, butchers and vegetable farmers, and served on a brioche bun from fellow Quebecer, the artisan baker Éric Borderon. It’s the poutine, however, which makes us linger – and willing to take in the extra calories. Cheekily labeled 2.0 on the menu, it’s “hand-smashed” Yukon Gold potatoes mingled with such cultivated flavours as Bordelaise chicken (Coq au Vin), wild mushroom ragout (La Forestière) and Red-Ale Braised Beef (La Braisée). Bon appetit.  —VV

From the pages of Zoomer magazine’s November 2013 issue