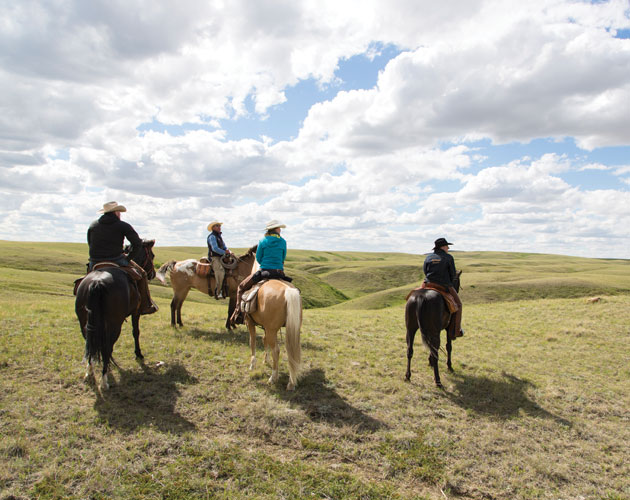 On a guest ranch in Saskatchewan, David Lasker saddles up for a soul-salving journey

We’re riding with the cattle drive at La Reata Ranch on the shores of the South Saskatchewan River near Kyle, two hours southwest of Saskatoon. Hundreds of heads and necks swing up and down like the beams of oil derricks. A pair of golden eagles wheels overhead. Steep, rugged coulees – small canyons – abruptly rip up the gently undulating terrain. We roam for miles without seeing signs of human habitation. I have an
exhilarating feeling of wanderlust. When the trail turns rocky, the horseshoes make that familiar clomping beloved of Western movies. The rhythmic sound is mesmerizing amid the prevailing silence. Evidently, there’s a tacit agreement not to break the spell with chit-chat.

For those who long for the Big Sky but feel, ahem, too grown up to really rough it, La Reata sits at the sweet spot between outdoor adventure and creature comforts. “A friend did a horse drive in Idaho where you have breakfast at 6:30 in the morning,” says Karen Greenaway, making her ninth two-week visit from England. “This is more of a vacation ranch. The owner appreciates we are on holiday, and it shouldn’t be exhausting.”

But neither is La Reata a typical dude ranch or luxury resort. Guests can participate fully or play helpless city slicker. Newbies don’t feel excluded because staff members are happy to assist and instruct as necessary. The remote location (out of reach of cellphone, Internet and TV), the low guest count (16 max) and the charming saloon encourage guests to socialize. Helping newly arrived beginners is George Gaber, La Reata’s owner, a landed immigrant from Germany who grew up on a livestock farm there. In 1995, he so enjoyed a week spent working with Texas longhorns at a cattle ranch near Swift Current, Sask., that he decided to move to the province and open his own ranch.

Even after having spent two weeks at an Arizona guest ranch myself 20 years ago, I was still green enough at La Reata to feel intimidated by the height of my American paint horse, with big, bold colour patches. Once mounted, I had to summon my willpower to stifle a frisson of fear. But my horse sense soon came back to me: walking is easy, but the faster gaits – trot, canter and gallop – require practice. So much about riding is counterintuitive: lean forward when you go uphill and lean backward and put weight on the stirrups when you go downhill if you want to maintain control of your horse. And when fast riding, stay loose and synchronize your bounces with the horse because if you hang on for dear life, you’ll pay dearly that evening with stiff shoulders and a sore butt.

Our day starts with breakfast at 9  in the cook shack. Afterward, guests mosey over to the paddock for the morning ritual of grooming their horses, then putting on blanket, padding and saddle. Guests typically bond with their horse and reserve the same one year after year. Indeed, some guests bond to the point of separation anxiety. “Hardly anyone who has been here longer than a week leaves without crying,” says Halifax resident Steve Wolff, who has visited for each of the past four years. By 11, we’re launched on the day’s main activity, the long group ride, broken up with a box lunch in a shady spot. George packs a coffeepot that he heats on a campfire. Then we nap (yay!) for 20 minutes.

Returning in the late afternoon, we descend the hill that sits around the ranch as the sun hangs low in the sky. The quality of light transforms, adding shadow and texture: prairie grass that looked flat and dull at noon turns lively and three-dimensional.

Out-of-saddle activities include a game of horseshoes, pool, foosball and darts in the saloon, and sitting in the hot tub. Nights may feature a campfire or a visit to the nearby White Bear Saloon for hot wings and drinks – 22 kilometres away, which, in the vastness of the prairies, is just down the street. Summer fun extends to swimming, canoeing, waterskiing and fishing on Lake Diefenbaker, where sandy beaches sprawl for 200 kilometres. “Sometimes we just fill up the truck with as many people as we can and take beer to watch the sunset from somewhere on our large property,” George says.

One bi-generational family passes the minutes before supper dummy-steer roping near the cook shack. At the outdoor arena, guests can also learn cutting (separating a cow from the herd by putting it into another pen) and the rodeo sport of barrel racing (riding a clover-leaf pattern around pre-set barrels).

The rewards of a hands-on vacation numbered many here. Part of the ride includes herding the cattle that laze about freely in the pasture. The week before my arrival, guests had helped out by bringing steel posts and wire to repair pasture fencing that a neighbouring ranch’s horses had kicked down. During my visit, a real-life rescue drama ensued. We came across a lost calf so young it was still mucky with afterbirth and trailing its umbilical cord. Shivering and dishevelled, it was lost in the vast pasture. A pair of guests-turned-wranglers dismounted and guided it gently toward its mother, a few hundred yards away. “I fell in love with La Reata,” says Wolff. “The scenery is so unexpected in the prairies. The rolling hills, the sun on the river and the endless sky just blew me away. Around the time of my first visit, I had been dealing with a lot of personal stuff, and this place renewed my soul completely.”