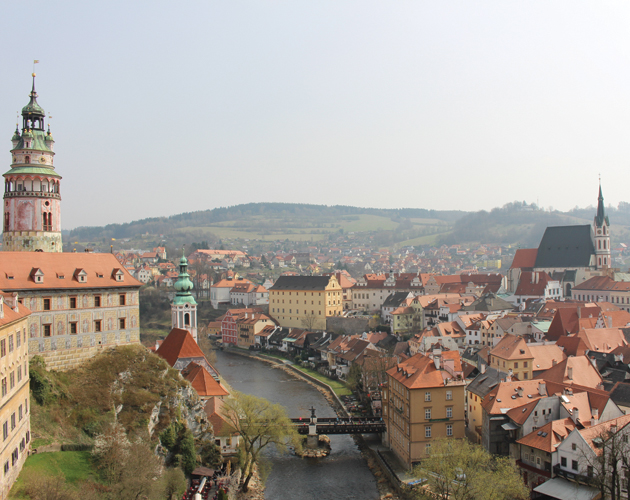 Going medieval, Vivian Vassos journeys through Bohemia and goes inside the walls of a hidden gem

If you find yourself in the Czech countryside, somewhere in Bohemia not too far from the Austrian border, say, along the curving banks of the Vltava River, you must detour to Cesky Krumlov. Admittedly, it sounds like the moniker of a cold-war politburo comrade but it is not. What it is is a hidden gem, polished and waiting to be shown off.

When you arrive, don’t be deceived by the ominous welcome. There is something beyond the towering structure that appears to be three stories of aquaducts suspended by sheer physics in mid-air and, in truth, hide only one of the many mysteries of Cesky Krumlov. This entry way is like something out of The Lord of the Rings – you’re crossing into something mythical, something magical. The rounded arches of the gate echo the curve of the river, one of the first things you encounter as you enter the city. Once through, cross the bridge that straddles the river. Stop. Now turn and look up. What you’ve just come through is not an aquaduct at all. It is a stacked series of long hallways that connect the fairy-tale, red-roofed castle to its courtyards. How do we know? We’ve been given a back-stage pass, a glimpse into the fairy tale with a local who literally holds the keys to this kingdom that lies within the walled city. And speaking of medieval, these keys appear to have been forged by giants.

Of course, we need a little help in the reveal: our local expert, Milan, comes by way of the travel specialists at Insight Vacations. The company has perfected a bit of magic of its own, managing to spirit away the stress of hauling luggage, booking hotels, transporting us through the Bohemian countryside on a coach with business-class legroom that is limited to groups with a maximum of 40 guests and, perhaps most importantly, making sure nothing gets lost in translation. We’re accompanied by a tour director – an expert in this region – and it is she who waved her magic wand, and – poof! – our English-speaking local appears.

After an easy stroll through the town, a few sets of winding stairs and a bit of an uphill slope (all the best things are better when we’ve worked up a little anticipation for them, no?) and through the castle’s official entrance – medievally named the Red Gate, naturally – we come to our bridge of hallways, called the Cloak Bridge, and make the crossing along the outdoor portion of the passage. The views alone can convince the body it need not go any further. This is Bohemian bucket list to the max. The town below is a tangled web of narrow cobblestoned streets, arch-covered footpaths, gabled houses that all spill into the main square – the same tangle that saw Tom Hulce playing Mozart in Amadeus, winding his way through what were stand-in streets for the Prague of the composer’s time.

But there is no rest for the curious traveller. We need more. Ornately decorated outdoor courtyards only hint at the grandeur within. The great key turns the lock, and we’re through, into a structure that has stood in one form or another since 1240. The interiors are resplendent, with original art works and period furniture that would have a Sotheby’s auctioneer hyperventilating. But after such a grand entrance, who could doubt it? Ah, says Milan, there’s more. It was not the seat of kings or queens, he imparts, but a rather run-of-the-mill (for the times) noble family, the Witigonens. Okay, there was a short time when the Czech branch of the Habsburg royals did move in, somewhere around the year 1600. Run of the mill or not, the family pile featured buildings for a brewery – we are in the Czech Republic, after all, where Pilsener is the real king – along with a pharmacy, a mint, a salt-storage house, a cheese dairy, stables and – the jewel in the crown – a jewel-box of a theatre. Like traversing a secret passage, we move down the covered connecting corridor of the Cloak Bridge from the Masquerade Hall to the Royal Box.
Backing onto the moat – of course, there’s a moat – this baroque building was added to the castle complex sometime in the 1600s, and many of the unique and ingenious machinery, set pullies, decorations and wooden sound-making contraptions are still on display. In the 1700s, Viennese set carpenters and scene painters were employed to make the tiny space grand. So grand, in fact, that according to our guide, its only peer as a baroque royal theatre is somewhere outside Stockholm.

I did say there was no rest, but our host has managed it, after all. “It’s rare that people get to stay overnight within the walls of the city,” says John Boulding, Insight’s Global CEO, “and in a building that has a history beyond being a hotel.” Boulding is talking about the Hotel Ruze, a five-minute walk from the town square, in a former 16th-century Jesuit dormitory and located in a designated UNESCO World Heritage site neighbourhood. The hotel has a museum-like quality; the rooms are decorated in period-style furniture – lots of Gothic dark wood and burgundy tones, no stark minimalism here – while original architectural details have been maintained wherever possible. The rusticity of the freestanding wooden bar and burgundy-velvet clad lounge is a good place to start on that Pilsener tasting (albeit the mannequins on display dressed in religious and medieval costumes are right out of an old Hollywood prop shop), and then it’s out into the town at night. Gone are the throngs of tourists and day-trippers; the curving streets throw off the shadows of the medieval past. Smoke-filled, beer-soaked alehouses, lined with communal wooden slabs for tables that may have been hewn and hauled here from trees just outside the walls – 400 years ago – beckon and encourage a bit of raucous fun with the locals. We’ve come full circle and find ourselves at the foot of our bridge of hallways, more imposing with the night sky as its backdrop. Behind us, the twisting alleyways remain unchanged, deeper in shadow, perhaps. If Mozart were to emerge from the darkness on this moonlit night, he would not seem out of place.

If you go: Insight Vacations has an overnight as a part of its Bohemian and Highlights of Eastern Europe itineraries. For more information, go to www.insightvacations.com or see your travel agent. Book by January 15, 2015 and take advantage of early booking fares.