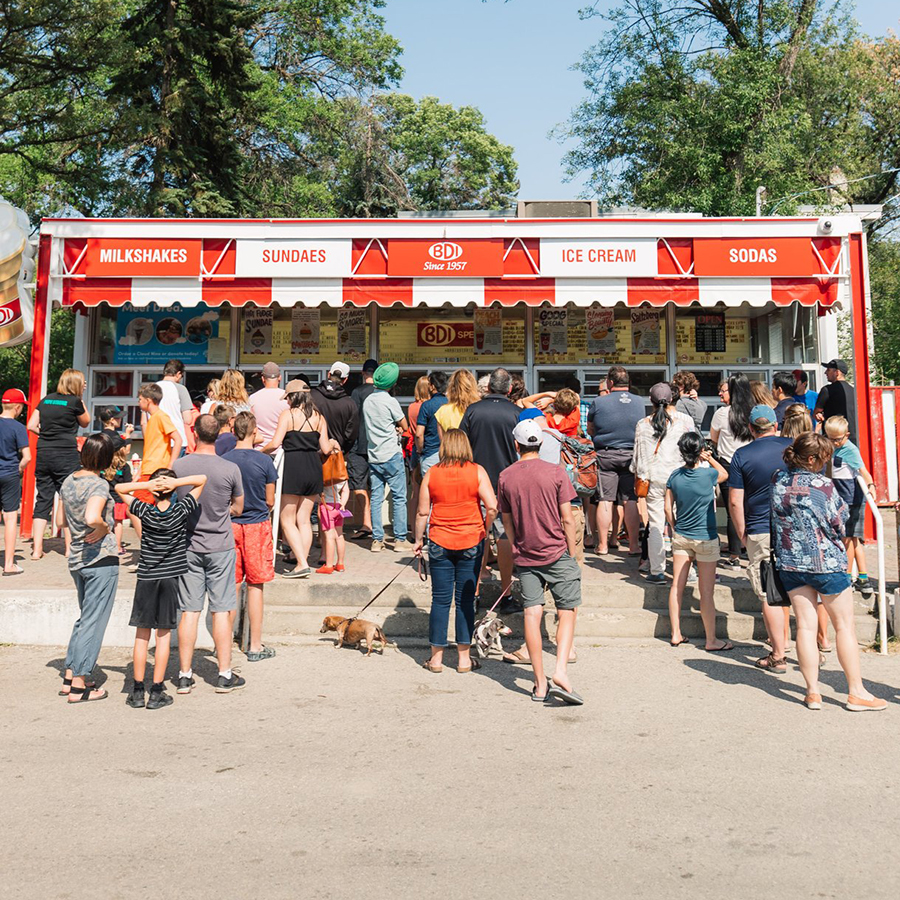 From the goog to the nip, we take a look at some of Winnipeg's delicious fast-food staples and the strange names they go by. Photo: Mike Peters

Winnipeg is getting set for summer and, when safe to do so, welcome travellers. With the new Qaumajuq, the Inuit art Centre at the Winnipeg Art Gallery opening, as well as the Manitoba Museum’s newly opened galleries, there’s lots to see, do and learn.

But, when it comes to food, this city has a quirky sub-culture all its own. And I dig it. Forget fancy food and white linen. These local institutions have survived the pandemic and are still up and running. Here, three cult classics and casual bites that ’Peggers have been devouring for decades.

What the heck is a goog? If you guessed an upside-down blueberry shake layered with sliced bananas, topped with a hot fudge sundae, whipped cream, peanuts and a cherry, “goog” job! For Winnipeggers, nothing says summer’s coming like the first goog of the season from Bridge Drive-In – or BDI in local parlance.

The tiny take-out, an institution on the bank of the Red River since 1957, packs them in at its setting next to a century-old walking bridge. As for the goog’s origins? A college kid’s creation, maybe. No one’s sure. “It’s a mystery. It’s always been an item staple,” say longtime owners Allan and Wanda Rutherford who recently passed the torch to granddaughter Jessica and husband, Justin Jacob. Ponder the mystery, goog in hand, while strolling the Elm Park Bridge across the Red River.

“The shmoo is forever,” laughs the waitress at Baked Expectations, a funky diner known for its huge dessert menu (as well as salads, sandwiches, pastas and other goodies) in Winnipeg’s indie Osborne Village neighbourhood. But it’s no joke. “We try new things but we keep tradition. It’s been our thing,” she says of the shmoo torte, a decadent angel food cake layered with caramel sauce and topped with loads of pecans, whipped cream and more caramel sauce that’s been a menu mainstay for 30-plus years. The recipe has contested origins though it’s said to have come out of Winnipeg’s Jewish community and its name (occasionally spelled “schmoo” elsewhere) is often traced back to the Shmoo of Li’l Abner fame, a delicious and bountiful creature that produced milk, eggs and even cheesecake.

Don’t call it a hamburger. Not here, not at Sals, the beloved local diner chain Salisbury House, that’s been feeding Winnipeggers since 1931. Owner Ralph Erwin didn’t like the name (too delicate!) so he called it a nip of Salisbury steak. More than 80 years later, the nip is still made with 100 per cent Manitoba beef, Sals’ own baked buns and plenty of grilled onions. As the city’s first 24-hour diner, Sals quickly spread through the city. In 2001, Winnipeggers former ice cream magnate Earl Barish and rock legend Burton Cummings took ownership. Their Pembina Highway and Stafford Street flagship store is worth the visit alone to see Manitoba music memorabilia including Cummings’ former 1891 Heintzman piano and Randy Bachman’s first electric guitar.

A Taste of Ireland: Secret Chef Recipes and Whiskey Pairings