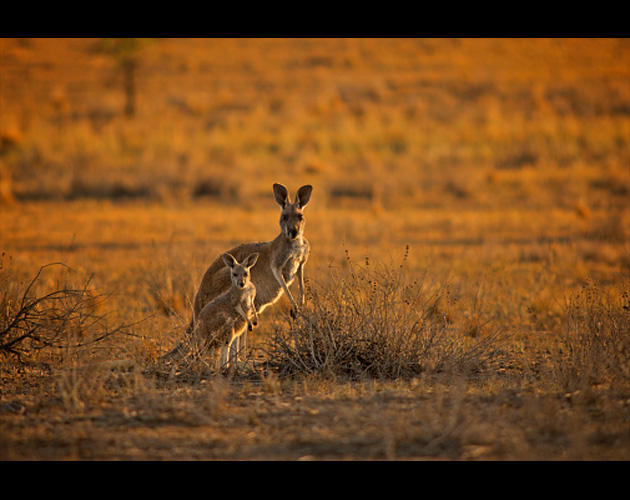 Swapping the usual destination suspects for down under, Vivian Vassos walks with kangaroos and experiences a stunning sunrise safari.

When Prince George visited a zoo on a tour of Australia and New Zealand with his parents this past year, it was on Easter Sunday, and it wasn’t the bunnies that impressed. For the wee royal, it was all about a bilby. A what? You might know it better as a bandicoot, a very rare marsupial, which looks to be a mashup of rabbit, rat and anteater.

But then again, you might not. This is Australia, after all, where most of the indigenous animals – some with barely pronounceable names, I might add – are absent from the rest of the planet: koalas (another cuddler that the Prince visited), platypus, wallabys, wallaroos and, yes, what’s perhaps the quintessential Aussie mascot, the kangaroo. Myth has it that you can chalk up its name to an Aboriginal language native to Queensland, based loosely on a word first heard by Captain Cook and his gang of explorers in the late 1700s.

And the kangaroo was my reason for making the trek to South Australia’s Barossa Valley. Okay, the wine and culinary scene didn’t hurt either, but getting up-close-and-personal with the giant marsupial sealed the deal. Typically, however, when one thinks of Oz, one thinks Great Barrier Reef, Uluru or Ayers Rock, the Outback, the Sydney Opera House. But what if you’re not a diver, a desert-trekker or into hours of four-wheeling through the dust?

This is a bucket-list destination of a different kind, the kind where you can educate your palate with food and drink and enrich your general well-being via animal appreciation: about an hour’s drive outside of Adelaide, Barossa Valley is a pocket of wine provenance that pretty much corners the market on some of the best Shiraz bottled, not just in Oz but the world.

This part of Australia has an interesting history, too. It’s a kinder, gentler spot, a paradox to the rough and ready rep of the former penal colony. And there’s the difference. The Adelaide area is unique in that it was indeed settled by the English gentry. They arrived in the Barossa Valley in the late 1830s and then hired Germans, who came to work the land – and work magic in winemaking, traditions that they had brought with them from the old country. And with the conservation of old-world ways followed the conservation of the wildlife and its natural habitat.

At The Louise, a boutique resort in the valley known for its award-winning restaurant Appellation and its intimate environment – there are only 15 suites on property, some with outdoor showers. Beyond food and wine, the resort has created an experience that is home-grown but definitely not bottled: breakfast among kangaroos at the nearby Kaiserstuhl Conservation Park. Just you and the roos, as they come out in the park’s open pastures for their morning forage. It’s arranged via local expert Jonathan Milne at Barossa Taste Sensations, and, a 20-minute ride later, you’re out of the vineyards and into the tree-filled park.

There’s no jostling in an open-aired vehicle for a better view, no guides kitted out with guns, no fences and no extreme fitness levels required. A leisurely stroll – that’s a bushwalk in Australian – for about 15 minutes through the forest reveals a flora and fauna and photographer’s delight: colourful wildflowers and towering blue-green-leafed eucalypt trees line the path while providing glimpses of a few of the near 100 species of birds that make the park their home.

The bush gives way to a field – and to two kangaroos making a meal of this morning’s dew-misted grass. Aside from my intake of breath and a slowing of our footsteps, it’s hushed yet with a lilting soundtrack of birdsong from the surrounding trees. These mammals famous for nursing and carrying their young in pouches are part of the macropod family, meaning large foot, and their feet certainly are large, facilitating their hopping forward motion. And considering that there are approximately 60 million kangaroos in Oz, that’s an impressive footprint. In this part of the country, the most common is the western grey, standing not quite as tall as its larger cousin, the red. Even so, a large grey male can reach a height of just over four feet (about 1.3 metres) and weigh in at nearly 120 pounds (about 54 kilograms).

These roos allow us to get closer – if we get too close for their comfort, they simply hop away in the opposite direction. These herbivores are also shy creatures. Ironic, as when there’s a group of them, they’re known as a “mob” – but very rarely have there been unprovoked attacks on humans. Milne finds a sunny spot in the clearing close enough so that we can appreciate the animals’ beauty without being invasive, and fresh fruit and hot breakfast is served, picnic style, from stainless steel tiffin carriers. Bubbly, of course, is part of the repast, and we say a toast as a few babies, called joeys, join their parents in the pasture.

The route through Kaiserstuhl is a circuit, all the better as you can walk off your breakfast while truly absorbing the benefits to the
psyche of just being in nature. As we pack up and then carry on down the trail, the scale of the park becomes apparent. One side forest, one side rolling hills and pastures, and everywhere kangaroos are coming out to graze and bask in the morning sun. The fields are dotted with dozens of them now, as if a mob of roos have let us into their home, just for this brief moment, a simple gesture that I try to savour, well, like a fine wine. Luxury? It’s a splurge well worth it. Spending a morning with some of the most unusual animals on earth? Priceless.

En route to the Barossa Valley, detour through the Adelaide Hills and stop for lunch at The Lane vineyard for its Euro-Australian blend wines and globally inspired cuisine, above. www.thelane.com.au

Once in the valley, if you’re a fan of port, head to Seppeltsfield, where the company has award-winning tawnys that date back more than 100 years. You can even have a taste of your own birth year port right out of the barrel or try Para DP90 Rare Tawny, one of the most awarded wines in Oz. www.seppelts field.com.au

Get an overview at The Artisans of Barossa, a co-op featuring seven winemakers, including Teusner, where shiraz, Grenache and Mataro grapes come together in bottles with cheeky monikers such as Dog Strangler, Avatar and Righteous FG Shiraz. www.artisansofbarossa.com

If you don’t want to drive, take a private tour with Adelaide local Mary Anne Kennedy of A Taste of South Australia. www.tastesa.com.au

In the New World red wine category, South Australia gives California a run for its money. Luckily, you can sample some of South Australia’s finest here: at last count, B.C.’s liquor store site listed 50-plus wines with Barossa-grown grapes (www.bcliquorstores.com), and the LCBO (one of the world’s biggest wine purchasers, www.lcbo.com) had more than 175 wines from the South Australia region in stock, including Penfolds, Hardys, Lehmann, Teusner and Jacob’s Creek. If you’re feeling really flush, go for the $1,300 Seppeltsfield 100 Year Old Para Vintage Tawny 1911.