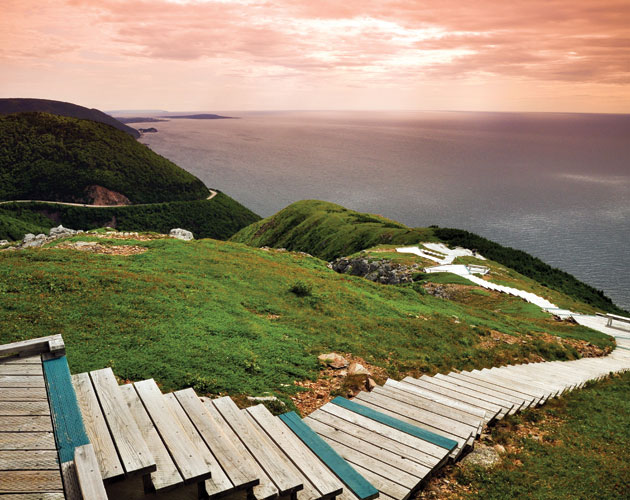 Looking for an escape from his everyday, Michael MacLennan heads to Nova Scotia.

It’s long past midnight in Sydney’s pristine Hampton Inn (so fresh, it still has that “new hotel smell”). I’m happily ensconced in bed … and wide awake. The plush mattress is built for dreamland, but my mind’s spinning – the work left back home, looming deadlines … or maybe it’s just a sugar buzz from the square of Cape Breton Fudge Co.’s highland maple fudge I scarfed down before head met pillow.

I’d completed Season 2 of my series Bomb Girls and had a precious week before launching into writing a TV movie. Time for a quick vacation! Somewhere both relaxing and stimulating that would draw my partner and me out of our routine without a long flight. We craved a connection to nature, yet some luxury, too. Would we find it in Cape Breton Island? National Geographic thinks so – its editors included it with 2013’s 20 Must-See Places in the World.

I knew that the island, perched like a huge lobster claw on Nova Scotia’s northern tip, had kindled imaginations since Alexander Graham Bell called it his summer home, conducting experiments there for 40 years. I knew that today the place was a haven for world-renowned artists including the great American photographer Robert Frank, composer Philip Glass, sculptor Richard Serra and pioneering performance artist Joan Jonas.

Of course, celebrated Cape artists are hardly an import-only business. Musicians Ashley MacIsaac, Natalie MacMaster, the Rankin Family and the late Rita MacNeil were all born here – where it’s been said there are more fiddlers per capita than anywhere on the planet. The great author Alistair MacLeod drew from the island’s landscape and history. Given a population of less than 100,000, something must be in the water. Laying in that bed that first night, I was thirsty.

It wasn’t always the case. The water – and air and sky – were long dominated by coal mines that pulled its best men underground, with steel plants taking the rest. But with a dried-up industrial basin and troubled fishery, most folks (descendants of French and Scottish settlers) are done hoping that new mines, fish stocks or corporate head offices might shift their fortunes. Instead, they’re drawing on a unique identity, creativity and pride – to make it for themselves.

Next morning, we found the perfect model in the Mi’kmaq First Nation Membertou reserve, which has reshaped itself from a shrinking, broken community to a thriving tourist hub. The Membertou Heritage Park features a fine museum and medicine garden, where director Jeff Ward welcomed us with a simple smudging ceremony, sage-smoke refreshing and grounding us. Now I’d landed.

Leaving Sydney, we stopped at Glace Bay’s Miner’s Museum for a bone-chilling view of the sacrifice and heroism beneath this beautiful land. Leading a hardhat tour through the old Ocean Deeps Colliery’s low-ceilinged dripping seams, retired miner Abbie Michalik was a perfect encapsulation of Cape Bretoners’ spirit, entertaining us with tales from his 50 years pulling coal  – and bringing us to tears with tales of tragedy and struggle. I forgot my petty problems, drawn into the island’s powerful story.

Above ground, the nearby French fortress of Louisbourg was once the largest in North America.  Razed by the Brits in the 1760s, it’s now meticulously reconstructed, a fascinating depiction of life on what the French called Île Royale. Costumed staff animate the streets with military drills, courtly dances and criminals’ sentencing. I expected a hokey charade, but Louisbourg is so immersive, it was a surprisingly compelling portrait. Cuisine is circa 1750 (including chocolate, coffee, bread and beer), while the few modern crannies demonstrate archeological discoveries – including nearby shipwrecks.

Armed with a new sense of the island’s history, we struck out for staggering coastal views: jaw-dropping cliffs, tree-packed mountainsides and ever-changing skies. Built in 1932, the 300-kilometre Cabot Trail loops the island’s northern tip. In 2012 Vacay.com listed the island as Canada’s most romantic destination.

But first, a taste of rustic grandeur, overnighting at the Keltic Lodge – piped in by a bekilted kid who probably skateboarded to work. Opened in 1940, the resort features views of Cape Smokey Mountain and the perfect crescent of Ingonish Beach. While rooms are simple, public spaces are fantastic: cliffside swimming pool, delicious dining room (their lobster was our trip’s best) and a lively pub. Local guitarist Deron Donovan melded Celtic and pop in a 90-minute encore (we wouldn’t let him go home). Nobody complained, since the guests bunking upstairs were sipping drinks beside us. I could feel Cape Breton and its people working their magic.

With artisan-run shops dotting the highway, the Cabot Trail offered us an exceptional craftwork showcase: pewter and jewelry, glass and quilts – and Les Trois Pignons, an unexpectedly astonishing museum of hooked rugs! At Wildfire Pottery, Sarah Beck sells exquisite dishes with a Maritime flair and Raku ceramic animals rendered with a rare blend of whimsy and skill.

The Trail’s northernmost section passes through Cape Breton Highlands National Park – perfect for working off last night’s blueberry crumble. The 26 hikes range from the Skyline Trail’s easy stroll (climaxing at a headland cliff with stunning views) to a steeper climb up Franey Mountain with its panorama of canyons, coastline and a moose – or 12.

Overnighting on the Cabot Trail finds simpler lodgings and classic fare. We braved gusts outside the cliffside Rusty Anchor to overlook Pleasant Bay and the distant road to Gampo Abbey. Led by famed Buddhist nun and author Pema Chödrön, the centre now offers public tours. For me, though, staring at the vast horizon was meditation enough.

At Margaree River Valley, John and Louis (“both named for saints and cities”) give new meaning to “immersive experience.” After their  short tutorial, we’re up to our hip-wadered chests in rushing water fly-fishing. All I caught was the scenery – and my right ear. Any residual stress the river couldn’t wash away, we left at the Glenora Distillery after sampling smoky small-batch single malt.

At the other end of the drive, I expected Baddeck’s Alexander Graham Bell National Historic Site to be a dry affair. Who’d expect a fascinating portrait of a creative genius and an island’s inspiration, complete with a replica of his Silver Dart, Canada’s first airplane. For a glimpse of the inventor’s hilly compound (where Bell’s descendants still summer), we took John Bryson’s wooden schooner Amoeba. Skimming quietly over the water, eagles swirling overhead, I was ready to cash out my ticket home.

We ended on the edge of paradise at Inverness’s new Cabot Links Resort. Nova Scotia architect Susan Fitzgerald has created a resort that’s quintessentially Maritime yet thrillingly modern. Overlooking the emerald knolls of Canada’s first links golf course along the St. Lawrence’s craggy shoreline, the effect is magic. It’s here that, after an impeccable dinner, the end of a week, a day, a continent, I relax into a perfect moment. Our feet are tickled by fescue grasses as sounds of surf waft on gentle breezes, a pink sky radiating sunbeams so perfect, it looks like a bad oil painting.

When real life is better than art, it’s no wonder so many creative souls fall in love with the place. Count this writer among them.

For more information, go to www.cbisland.com