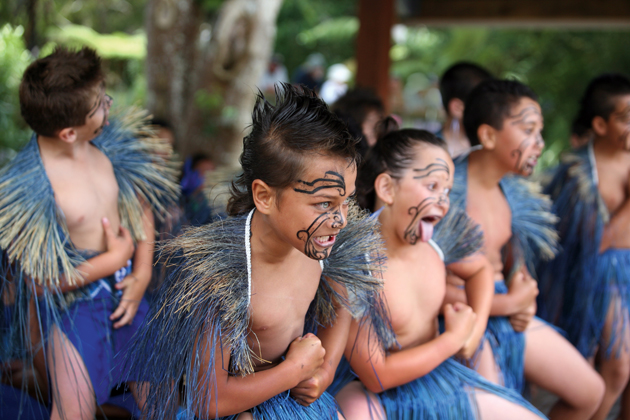 #BucketList this: Pacific Rim, where nature refuses to be conquered. Here, journey to the edge of New Zealand’s North Island.

Ngahina Hohaia is cradling a conch, a seashell curved and worn to a pearly pink from the ocean and the sand and from where she has held it in her hands over the years. The conch is more than decoration, more than giver of food to her Maori ancestors, feeding them with its meat; the conch is a musical instrument.

Ngahina is my guide and, during my day with her on Waiheke Island, a half-hour ferry ride from Auckland on New Zealand’s North Island, she is showing me all of her instruments, traditional Maori music makers, wrought from wood, gourd and shell, carved into trumpet shapes and wind-catching chimes on strings. Many she has made herself; others have been handed down to her from her Maori father.

As she puts her lips to the conch, she softly sends a breath through its chambers, and the breeze is suddenly alive with a melodic sound, as much a welcoming dinner bell as a horn that could have trumpeted danger. But it’s her mouth that has me mesmerized.

In the Maori tradition, you can choose to create your own tattoo design. We’re not talking guns, roses, skulls or “Mom” here but intricate patterns that have meaning to the generations that have come before.

For Ngahina – a guide with Potiki Adventures, whose founder, Bianca Ranson, is also of Maori descent – generations of her father’s family are what informed her choice of tattoo. Rather than creating something new, she chose to have the artist line her lips and chin with the same pattern that adorned her paternal great grandmother’s chin. A blue-black outline that swirls and curls below her mouth and wraps just shy of her jaw line. Beautiful, arresting, statement-making, yet simply Maori tradition.

Her devotion to these traditions seems as elemental to her as the elements that make this country unique. The winds that touch the surface of New Zealand barely cross any other land mass, a free-wheeling breeze that’s fresh and constant.

But it was, for me, the winds of change that brought me here. The idea of turning myself upside down, heading forward into a new life, was part of my raison d’être. I wanted to fly, to take to the air.

At the top of the North Island more than three hours north of Auckland, I did. No, I didn’t jump out of a plane but I did board one.

A tiny Salt Air prop plane that held fewer than 10 people suspending us over the Bay of Islands between earth and clouds and taking us farther north for 45 minutes.

Deserted white sandy beaches hugged the land; remote harbours carved by nature’s hand and only visible from air or by sea whittled the coastline, while tiny islands dotted the clear turquoise waves. We land on a grassy strip of a runway and climb into a van. Cape Reinga, the northwesternmost tip of the North Island is our destination, where the Pacific crashes headlong into the Tasmanian Sea, a meeting so violent, it’s evident to the naked eye.

Yet, above it at the lighthouse lookout, it’s quiet, with only a handful of people marvelling at the whirlpool; here at the country’s edge, the beacon sits, jutting into the blue like a finger pointing at the spectacle. The milepost features distances to Vancouver, the South Pole, even the Tropic of Capricorn, its jaunty yellow in stark contrast to the white of the lighthouse and the near impenetrable blue of the sky.

Could I put my toes in the water? Not far away, at Tapotupotu Bay, the answer was yes. It was warmer than I expected, at the end of the summer. It lulled me, just for a moment; the next wave took me by surprise, soaking my jeans to my calves. I laughed. I was at its mercy, just for that moment, and I was happy to let it wash over me.

Perhaps it was time to try surfing. But not on the waves, mind you. This surfing brought me back to the land, the earth. My toes barely dry, I was at the Te Paki Quicksand Stream, standing at the base of a giant sand dune. I watched as a brave soul at the top took a sled, more like a thin sheet of rubber, put it out in front, and started to slide. Down. Fast.

Sand boarding is very much like tobogganing on snow, but the steep decline had me nervous. Never mind. I didn’t need to surf it. I just needed to climb it, make it to the top, so I could say that I did. And I did. All 100 metres of it. The view from the summit was extraordinary, more undulating mounds and curving dunes that covered the horizon like something out of Lawrence of Arabia, and I felt close enough to touch the single puff of cloud that cast its wisp of shadow over me.

On the descent, I walked, resisting the urge to just drop and roll like a ball to the bottom, abandoning my body to gravity’s pull. Once down, I looked up again. It looked different now. My tracks were imprinted on its face. Still beautiful but conquered.

Or was it? Nature here refuses to be conquered, and so does the Kiwi spirit.

That said, when Prince William and Kate, the Duchess of Cambridge, were here in 2014 with the bonnie baby Prince George, they certainly won over the people. William was greeted in the traditional Maori haka – welcome is a loose description, as it’s more of a fiery challenge, a warning that we are warriors, make your intentions clear as to why you are here.

Eyes bulge, tongues flash, menacing faces are made, geared to intimidate, to remind that you are on my turf now, dude, so pay attention. You are judged in that moment: to flinch in fear or laugh in disrespect are both signs of weakness that you’ll be defeated.

I, too, had a first look at this “royal” welcome, at Tamaki, a Maori village in Rotorua, while travelling by coach with local tour company AAT Kings. Fire did burn in the eyes of my greeter, ignited by a depth of conserving this Maori tradition. Like Ngahina, the people of Tamaki strike a beautiful balance of preserving history with showing their pride in their culture in the here and now.

A few days later, I was suspended again but, this time, by the natural salt water that flows into the hot mineral pools at Rotorua. The therapeutic nature of taking the waters is well known, and moving from one pool to another of varying temperatures soothed my aching muscles, a residual effect from climbing the dunes the day before.

While I float, I recall my day with Ngahina and our walk through what was once her people’s garden. We hiked through the forest as she recounted stories about her people’s connection to Mother Earth and Father Sky – this island country that they named Aotearoa, “land of the long white cloud.”

On this native bush walk, she pointed out the manuka tree and many other medicinal plants and herbs – and the birds, one of the few animals that were native to the island at the time the Maori first made their way here from Polynesia, sometime in the 1300s.

As we climbed to the summit – a historical paa, a site where tribes would take to higher ground in defence against intruders – I took a look back and spied the modern metropolis of Auckland across the Bay. I realized it was all the elements of this place – the breeze, the sea, the earth and the Maori’s burning desire to move forward yet share their cultural past – that took me from upside down and turned me right again.